A Dampening of Euphoria May be Warranted

Euphoria concerning the U.S. economy, as demonstrated by record-setting stock market indices, won’t be dampened much by the just-released and somewhat tame Employment Situation report from the Bureau of Labor Statistics. The total number of American jobs in December rose by a lukewarm +145,000. Also, November’s jobs total was revised downwards slightly, by -14,000. 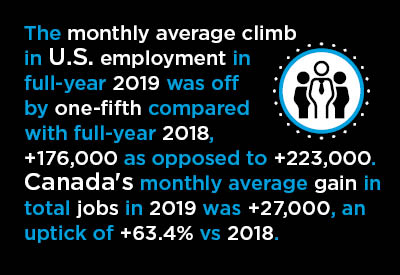 At the same time, though, the seasonally adjusted (SA) unemployment rate stayed constant and exceedingly tight at 3.5%.

Graphs 1 and 2 have been derived from the Job Openings and Labor Turnover Survey (JOLTS). Graph 1 highlights that while total job ‘openings’ in the U.S. economy, expressed as both a level and a rate, remain quite elevated, they have been easing off a bit over the past couple of years. Also, ‘hires’, as captured in Graph 2, appear to have been moving sideways more than upwards.

A historically low unemployment rate will render jobs advances, as seen so far in this economic upturn, harder to achieve. In turn, slower employment pickups will lead to a deceleration in consumer spending growth.

For the moment, though, ‘the consumer’ is still calling most of the shots in the economy, even in the labor market. For example, the biggest climbs in U.S. jobs among industry sub-sectors in December occurred in the consumer spending area. ‘Retail’ jobs in the latest month were +41,000. ‘Leisure and hospitality’ jobs weren’t far behind at +40,000.

‘Education and health services’, a jobs-creating frontrunner in many recent months, had an employment gain in December of +36,000.

*Rate is number of hires during month as % of construction employment.
JOLTS − Job Openings and Labor Turnover Survey. Latest seasonally adjusted data points are for Oct 2019.

Wage Growth Still Loping Rather than Sprinting Along

Canada Had Huge Jobs-Creation Year in 2019

North of the border, the increase in total employment in December, as reported by Statistics Canada, was +35,000. The good news was further augmented by a drop in the SA unemployment rate from 5.9% to 5.6%.

During 2019, Canada’s total jobs count rose by +320,000. An astonishing 96% of that increase originated in either Quebec or Ontario. While Quebec contributed one-fifth of the gain, it was Ontario that really stepped into the spotlight. Ontario generated more than three-quarters (76%) of Canada’s impressive total employment gain in 2019.