In July, Canada Added Less than Half of June’s Jobs Increase 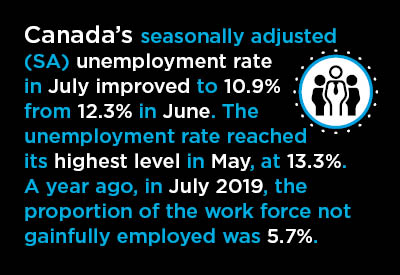 In March and April, with the economy immobilized by fear of the coronavirus, the shrinkage in the total number of jobs nation-wide was a staggering -3.0 million.

From the middle portion of Table 1, titled ‘Pandemic’, it can be seen that Canada’s employment claw-back ratio of 55.3% is better than the 37.3% result for the U.S., although it should be noted that Canada’s jobs drop in March-April of -15.7% exceeded America’s -13.5%.

The lockdown was more sweeping and consistent in provinces than in states.

Table 2 sets out many of the key numbers on Canada’s labour market, with an emphasis on the progress being made to return to ‘normal’.

In April, Canadian total employment was -15.7% compared with February. (February is the benchmark date because it was the last month to provide statistics mostly unaffected by COVID-19). By July, though, the total employment decline versus February was reduced by more than half, to sit at -7.0%.

Construction’s early spring jobs retrenchment of -21.2% has been pulled back to -8.5%, yielding a jobs-recovery ratio of 60.1%.

Finally, the 15-to-24-year-old age cohort which saw more than one-third of its employment positions disappear in March-April, is in a much better position today with a jobs deficit only half as severe, at -17.4%. The young-adults claw-back ratio has been 49.0%.

Alberta’s Labour Market Struggling; But so is Ontario’s

Canadian provincial labour market statistics are set out in Tables 3 and 4 and Graph 1.

Six of the ten provinces are continuing to sport unemployment rates that are in double-digit percentages: Newfoundland and Labrador, 15.6%; Alberta, 12.8%; Prince Edward Island, 11.7%; Ontario, 11.3%; and British Columbia, 11.1%.

The lowest unemployment rates are in two of the country’s three prairie provinces: Manitoba, 8.2%, and Sastachewan, 8.8%. Underlying support in those two provinces has been coming from farming activity. (There’s a similar situation in the U.S., where the states in the Midwest agricultural heartland are generally turning in better output numbers than the rest of the country.)

Alberta, the third prairie province, is currently being held back by an underperforming energy sector.

Only two provinces have experienced year-over-year jobs contractions that have been relatively minor: New Brunswick, -1.8% and Manitoba, -3.2%. The others have all suffered through considerable jobs-loss trauma, with Alberta worst at -7.9% y/y.

Table 4 records that among all provinces, the jobs claw-back ratio is currently best in New Brunswick, at 75.0%, with Quebec solidly in second spot, 70.2%.

Ontario, with nearly 40% of the nation’s population, is historically Canada’s economic powerhouse. But its jobs claw-back ratio, at just 42.5%, is presently worst among all provinces.

STE-EULALIE, QUE. — A construction worker is dead after he was hit by a driver e...

VANCOUVER — Construction delays related to a COVID-19 shutdown of its Quebrada B...

Premier John Horgan has released Stronger BC for Everyone: BC's Economic Recover...

Existing technology designed to be worn by construction workers is teed up and r...

STE-EULALIE, QUE. — A construction worker is dead after he was hit by a driver e...

VANCOUVER — Construction delays related to a COVID-19 shutdown of its Quebrada B...

Workers hoist a section into place at the Litho rental building and retail proje...