Gasoline and Apparel at Opposite Ends of Elasticity Equation

An interesting sidebar to the coronavirus story has been seeing how elastic prices are to dramatic shifts in retail sales and other high-profile categories of economic activity (e.g., in the travel sector). Wider than usual percentage changes have made relationships more apparent. 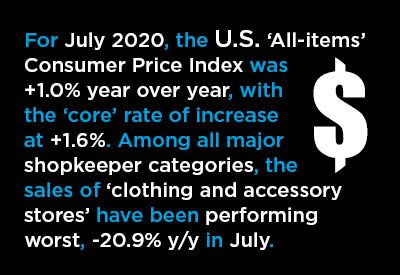 For July 2020, the U.S. ‘All-items’ Consumer Price Index was +1.0% year over year, with the ‘core’ rate of increase at +1.6%. (The ‘core’ rate eliminates items in the CPI ‘basket’ that have a history of extreme volatility, mainly in the energy and food spheres.)

It’s in specific consumer product categories, however, where the most fascinating results are to be found.

For starters, the retail sales of gasoline stations in July were -15.6% year over year (Graph 1). Much of the explanation lies in the fact the price of petrol in America in the same month was -20.3% y/y (Graph 2).

In the case of gasoline, the price, ‒ which is determined externally based on global demand for oil, ‒ is determining gasoline station receipts. More often, the relationship is the other way around.

For example, among all major shopkeeper categories, the sales of ‘clothing and accessory stores’ have been performing worst, -20.9% y/y in July. (In June, they had been -23.2% and in May, -63.4%). Therefore, it’s no surprise that the ‘apparel’ sub-index of the CPI in July was -6.5% y/y. In this instance, it’s the sharp drop in the sales volume that is setting the price. Discounts are being offered in the hopes of driving more sales.

Food and Beverage Consumption and Prices

There is a similar mapping, but in the opposite direction, to be found between food and beverage consumption and their price changes as captured in the CPI survey.

Stocking up to ensure cupboards don’t run bare has permitted some larger than normal price increases. The ‘food at home’ sub-index of the CPI in July was +4.6% y/y.

The latest data points are for July 2020.
The U.S. figure (CPI-U) is the All Items Consumer Price Index for All Urban Consumers.
*Core inflation is CPI-U less its often most volatile sub-components, food and energy.
Data source: U.S. Bureau of Labor Statistics (Department of Labor).
Chart: ConstructConnect.

Revenues and Pricing in the Travel Sector, U.S. and Canada

Price changes are identifying where, among sectors, activity levels are chugging along nicely (grocery store sales) or are in the most distress (the travel and accommodation industries).

Due to the world-wide coronavirus outbreak, travel to all corners of the globe has been drastically curtailed. Airlines have been cutting staff, placing pilots on furlough and scrambling (and often failing) to save routes.

North of the border, Canada’s July CPI results featured the first year-over-year decline (-8.6%) in ‘air transport’ prices since December 2015, when the cost of jet fuel took a dive.

Canada’s sub-index for ‘traveler accommodation’ in July was -27.0% y/y.

Some Other Notable U.S. Price Changes

The following, in bullet form, are some other notable U.S. year-over-year price changes as set out in July’s CPI report.

Canada’s Price-Change Ties to Activity Levels Not as Pronounced as in U.S.

Canada’s ‘All-items’ CPI performance was barely elevated year-over-year in July, at just +0.1%, according to Statistics Canada. The country’s ‘core’ rate of inflation was +0.5%.

Canada’s price-change ties to activity levels have not been as pronounced as in the U.S. (When, some years from now, academics come to study this phenomenon during COVID-19 days, they’ll do better to look at the U.S. data than the Canadian.)

Canadian ‘food and beverage store’ retail sales in June were +11.8% y/y (quite close to the U.S. experience), but the ‘food purchased from stores’ CPI sub-index was ahead by only +2.4% y/y.

At present, and as is apparent in Graphs 8 and 9, inflation in the U.S. and Canada is falling short of what’s considered desirable, +2.0% y/y. But there are reasons to believe the rate of price advance may soon take flight.

Extreme government debt and extraordinary credit easing by central banks are fiscal and monetary forces that, if the past is any guideline, will light a fire under prices.

Plus, material shortages, resulting from de-globalization and corporate bankruptcies, will be a spur to price hikes. Also, retirements of aging workers with unique skill sets ‒ who see the dangers of the coronavirus for their age cohort as a clear message to grab their ‘freedom’ ‒ pose a replacement challenge for employers, with all that means for wage increases.

What are the knock-on implications of inflation rates that expected to speed up?

Fixed interest rate debt carried by individuals and corporations is generally easier to pay off when inflation is more heated. Returns from rising incomes and pricier-product sales can better handle carrying costs and make inroads into outstanding principal amounts.

Variable interest rate debt, though, as found in personal (e.g., HELOCs – home equity lines of credit) and payroll lines of credit (i.e., to be carried at ‘prime’ plus a premium), is a story with a different plotline entirely. Faster inflation inevitably drives interest rates upwards and the burden can quickly become formidable.

Based on year-over-year ‘All-Items’ Consumer Price Index (CPI-U), not seasonally adjusted (NSA).
For a variety of reasons, there is a desirable rate of inflation and it’s around +2.0% y/y.
Latest data points are for July 2020.
Data source: Statistics Canada.
Chart: ConstructConnect.

World of Concrete wraps with 36,000 delegates

LAS VEGAS - World of Concrete concluded its three-day in-person Expo at the Las...

Given the ambitious goals contained in its Climate Change Plan launched in 2020,...

OSHAWA, ONT. — A new multi-use community centre is being constructed in the nort...

This is the first of a recurring column by leading occupational health a...