Update on BC: Exports & Capex will dull Pain of Higher Interest Rates

Despite the growing threat that rising interest rates will precipitate a North American recession, several measures of British Columbia’s economic activity suggest the province is approaching the second half of the year at full speed. For example, the Canadian Federation of Independent Business’ Short Term Business Barometer Index increased from 57.0 to 57.6 in May, its second-highest print since late 2018.

The strength of demand for labour in B.C. is highlighted by a +99,000 increase in full-time hiring over the past year. At the same time, despite a record inflow of international (+67,000) and interprovincial (+34,000) migrants, the province’s job vacancy rate jumped from 5.8% to an unprecedented high of 7.3% in March. The strong pattern of admissions of permanent residents, together with the likelihood that B.C. will continue to attract many migrants from other provinces, will underpin housing demand over the longer term.

Over the past year, stronger global demand has given a big boost to B.C.’s exports. Year to date, they are up +32%, largely due to surging foreign sales of coal (+172%), natural gas (+42%), and petroleum products (+70.8%). The fact most of the increase in energy exports predated Russia’s invasion of Ukraine and the ensuing sharp escalation in prices for coal, crude petroleum, and natural gas, suggests they will make an even larger contribution to growth in the second half of this year.

Dampening, but not Drowning, Effects of High Interest Rates

With the above-mentioned strength of full-time hiring, persisting low-interest rates, and a post-covid-19 rebound in confidence, consumer spending (as reflected by retail sales) posted a solid +6.1% quarter-to-quarter gain in 2022’s Q1, after back-to-back declines in Q3 and Q4 of 2021. Going forward, while spending will be dampened by rising interest rates and the eroding impact of inflation on real disposable incomes, it should (as a counterweight) be supported by sustained gains in hiring and a steady inflow of interprovincial and international migrants.

After hitting an eight-month post-pandemic high of 10,024 units in January, the combination of softening pent-up demand, a significant deterioration in affordability due to higher house prices and a shrinkage in the number of new resale listings, caused B.C. existing home sales to trend steadily lower over the past three months. Consistent with this moderation in demand, starts of both single and multiple units in the province have retreated from a recent high of 51,000 units in December to 30,000 in March.

Going forward, the impact of the recent increases in interest rates on top of B.C.’s pre-existing affordability issues will probably cool ownership housing demand through the remainder of this year and into the first half of 2023. That said, the effects of a persisting steady inflow of international and interprovincial migrants will underpin demand for rental accommodation.

Unlike residential construction and consumer spending, the near-term prospects of which are dimmed by higher interest rates, the outlook for non-residential construction is in positive territory for several reasons. First, for B.C. firms, the average rate of capacity utilization has increased steadily from 71% to a high of 76% since February. Second, the most recent (2021-22) Statistics Canada survey of Non-residential Capital and Repair Expenditures (CARE) reported that public and private organizations intend to increase their capital outlays by +7.2% in 2022 after an estimated gain of +11.2% in 2021.

Third, according to the provincial budget, taxpayer-supported investment will increase by +30% in fiscal 2022-23. Major projects underway or on the drawing boards in the province include Broadway Subway work, the twinning of Highway 1 between Kamloops and the Alberta border, the LNG Canada Terminal, and the Pacific Trail Pipeline. 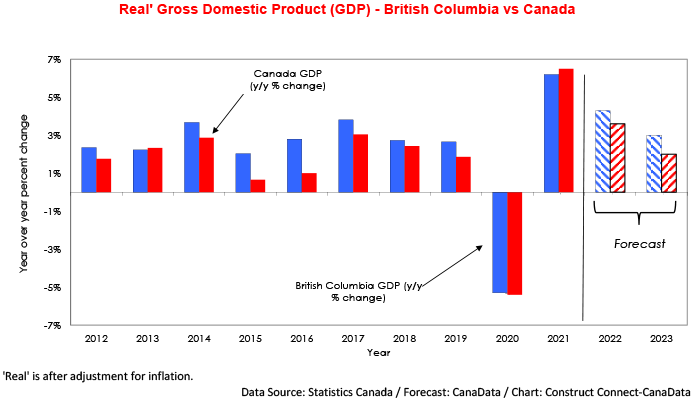 On this episode of the Construction Record Podcast, digital media editor Warren...