On family trips, one of the most frequently voiced questions by my children was, “Are we there yet?” Indeed, the advent of the Internet and an increase in online shopping has dramatically shrunk the waiting times for food, entertainment, and just about everything else we use in our daily lives. Unfortunately, there are a couple of things that do not lend themselves to a quick fix.

To dampen Canada’s inflation rate, which hit a high of +12.9% year over year in August of 1981, it took the Bank of Canada almost ten years to wrestle the headline number back below +2%. After the Bank adopted “Inflation Targeting” in 1991, it depressed inflationary expectations.

Between 1992 and 2020, headline inflation averaged just under +2% y/y (+1.8% y/y actually). Following this prolonged “nap”, inflation awoke in mid 2021 and started to creep higher fuelled by a surge in pent-up demand, rising commodity prices (especially in the energy sphere), a dramatic rise in public spending (originally focused on providing income support to individuals laid off due to COVID-19) and severe supply chain shortages (also largely due to COVID-19).

Between January of 2021 and January of this year, inflation in Canada accelerated from +1% y/y to +5.1%. However, monetary authorities remained on the sidelines and did not tighten monetary policy by raising short-term interest rates. They assumed the world would normalize and that inflation would return to its +2% target once excess demand eased off and the supply chain issues caused by COVID dissipated. Instead, strong growth of hiring and persisting supply chain problems pushed the inflation rate to a 30-year high of +8.1% in June.

Adopting a “better late than never” approach, in March of this year the Bank of Canada boosted its target for the overnight rate by 25 basis points to 0.50% and stated that it would “use its monetary policy tools to return inflation to the 2% target and keep inflationary expectations well-anchored”.  Since then, and in several stages, the overnight rate has been moved further upwards to 3.25%. Faced with the above-noted rise in headline inflation and, more significantly, with much higher inflationary expectations, the Bank noted in its September 7 policy interest rate announcement that “given the outlook for (higher) inflation … the policy interest rate will need to rise further”.  This statement raises two questions: by how much and for how long?

A recent speech by Carolyn Rogers, Senior Deputy Governor of the Bank of Canada, noted that there is a significant lag, of up to two years, between changes in interest rates and their full effect on inflation. Based on this statement and given that the Canadian economy is continuing to operate with excess demand and acute labour shortages, a recent Statistics Canada paper titled “Analysis of business expectations of rising prices in Canada, Q3/2022”, found that 88.8% of businesses in accommodation and food services, 86.0% of those in construction, and 85.3% of manufacturing companies were likely to report higher costs of inputs and supplies. Also, those same industries were found disposed to increase their selling prices in the near term.

Although headline inflation slowed from +7.6% to +7.0% in August, several recent developments suggest prices increases will remain above the Bank of Canada’s +1% to +3% target range in the remainder of this year, throughout next year, and likely well into 2024. First, the job vacancy rate, which hit a record high of 5.9% in Q2, will be exacerbated by a slowing rate of entry of individuals aged 20 to 30 into the labour force. Second, the employment rate among individuals aged 55 to 59, currently at a 12-month low, will likely trend downward due to an increase in the number of Canadians planning to retire in the next 12 to 18 months.

Third, although worker productivity ticked higher (+0.2%) in Q2, to 107.0, it is well below its pre-pandemic peak of 112.5. Fourth, in its recent policy rate announcement, the Bank of Canada highlighted that “the Canadian economy continues to operate with excess demand and labour markets remain tight”. The degree of excess demand is reflected by a +9.7% jump in consumer spending in the second quarter, three times faster than its average quarterly increase since 2002.

Finally, by boosting federal spending to the tune of $4.3 billion when it should be cutting back, the federal government is pouring more fiscal stimulus on an already overheated economy. As a result, the Bank of Canada will have to work harder (i.e., raise interest rates higher for longer) to bring inflation back to its +1% to +3% target range.

We expect the Bank to hike interest rates above the consensus range of 3% to 4% and keep them there for an extended period. This will probably deepen and lengthen the recession which we and a growing number of economists are expecting to start before the end of this year. 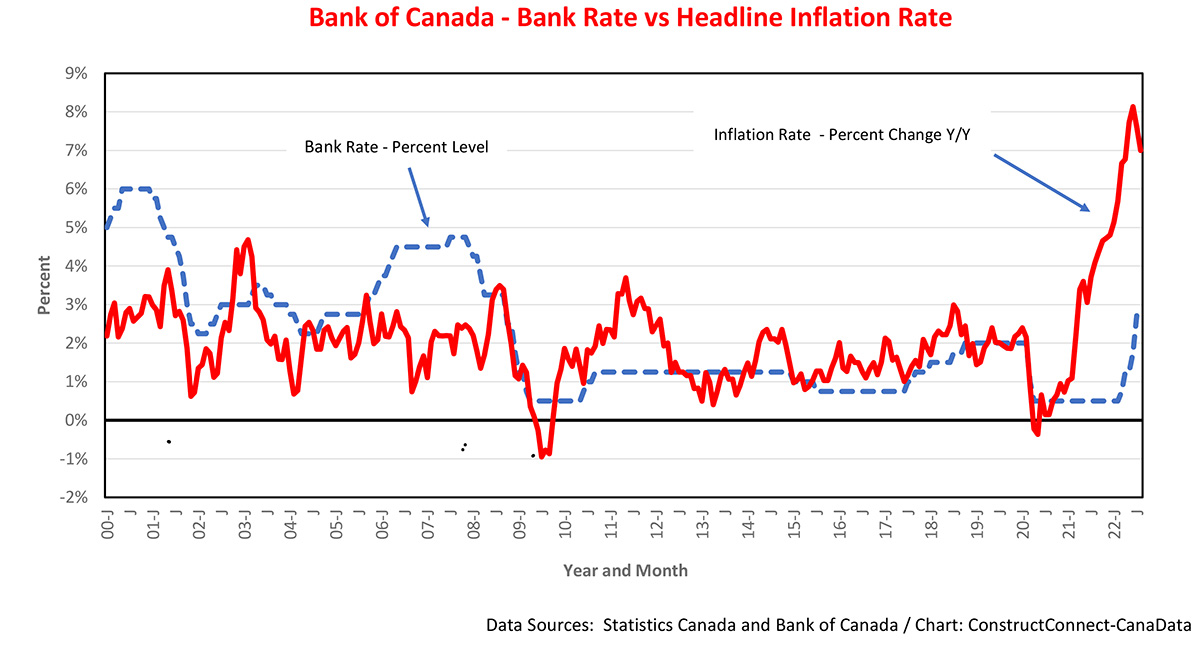 CALGARY — TC Energy Corp. is raising its estimate for the cost of its Coastal Ga...