Following a contraction in 2018, total construction starts in the US grew by 4.0% to reach $795bn. Residential starts spent a second year in contraction, falling by 3.8% in 2019, with both the single and multi-family segments slipping. Non-residential starts rose by 5.3% supported by ground-breaking for several large factories. Civil engineering starts increased by 15.9%, supported by new power infrastructure projects, particularly in Q3 2019. 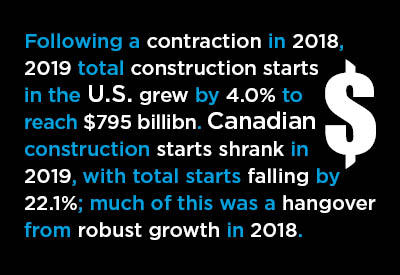 Canadian construction starts saw a less positive story, with starts declining by 22.1%, albeit much of this contraction was a hangover from strong growth in 2018 with several projects falling out of the calculation. Non-residential construction led the decline, falling by 44.2%, as several large projects such as starts on a new metro line in Montreal fell out of calculation. Meanwhile, civil engineering and residential starts fell by 7.4% and 6.0% respectively.

US year in review

US economic activity held steady momentum through 2019, with GDP growing by 2.3%, but the increase was weaker than 2018 as much of the stimulus from the Tax Cut and Jobs Act had unwound and global headwinds stemmed external demand. Jobs growth in the labor market also saw slower momentum, adding an average of 176,000 jobs a month, but the unemployment rate remained on a downward trend, averaging 3.7% for the year, and average hourly earnings rose by 3.2%, the fastest rate of growth since before the global financial crisis. Investment growth slowed due to weaker global demand and fading tax cut impetus, growing by 1.9% in 2019. This slowing external demand also caused exports to contract by 0.2%. Import growth also slowed to 0.9% resulting in a further negative contribution to GDP from net trade. The Federal Reserve cut its benchmark interest rate three times through the course of the year, by 25 basis points each time.

New construction starts expanded by 4.0% in 2019, following a contraction in 2018 that was exacerbated by a strong outturn in 2017 data falling out of the annual calculation. Residential starts contracted for the second consecutive year, falling by 3.8% in 2019, with both the single and multi-family segments declining. Growth in the non-residential and civil engineering segments was able to offset this. Non-residential starts rose by 5.3% supported by ground-breaking for several large factories. Civil engineering starts increased by 15.9%, supported by new power infrastructure projects, particularly in Q3 2019.

Despite declining for a second year in a row, the contraction in residential starts of 3.8% was an improvement on the 6.7% drop in 2018. While there were contractions in both the single-family and multi-family segments, the fall in single-family starts was less severe, slipping by 2.4% for the year as a whole. Additionally, there were some green shoots appearing in the second half of the year with positive year-on-year growth recorded in Q3 and Q4 of 2019. Multi-family starts contracted by 6.8% in 2019. This may still be a hangover from the rapid growth in 2017, as despite two years of decline, multi-family starts in 2019 still remain above 2016 levels.

Growth in starts for non-residential construction was relatively mixed across its subsectors, despite an overall expansion of 5.3%. Sectors experiencing double digit percentage declines included courthouses, prisons, laboratories, nursing homes, hotels and shopping projects. Starts in the transportation terminal category led growth, doubling in 2019. Several mega projects were behind this, including May’s $3.2 billion light rail expansion in Seattle, several lobby expansion projects at airports in Kansas City, Nashville and Charlotte totalling $2.5 billion, plus November’s expansion of Pennsylvania Station in New York. Manufacturing starts also saw robust, mega project-led growth of 43.3%. Among these were a $10 billion LNG export terminal and a $10 billion ethane cracker plant, both in Texas, two starts on automotive plants in Alabama in March for Toyota-Mazda and Mercedes-Benz and a car battery plant in Georgia, in May. Sports and convention center starts saw growth of 33.8% backed by an $850 million project beginning at the Key Arena in Seattle in September.

Civil engineering starts saw broad-based growth of 15.9% in 2019, with all subsectors contributing positively except airports (e.g., runways, etc. rather than robust erminal work), which declined by 0.6%. Power infrastructure starts was the fastest growing sector, rising by 83.9%. Several mega projects supported this including a $3.1 billion wind power station in Wyoming, two natural gas plants in Michigan totalling $1.5 billion and ground breaking at a wind power generation facility in Iowa of $920 million. The miscellaneous engineering sector was the second fastest growing segment at 31.7% in 2019, with mega projects resulting in triple digit year-on-year growth in the second half of the year. These projects included several rail starts in Q3 and Q4 totalling over $10 billion, including the $4 billion Virgin Trains expansion in Orlando, and starts on two pipeline projects in Texas and Wyoming in December, totalling $3 billion.

Construction starts were mixed on a regional basis, with contractions in the Northeast and Midwest offset by growth in the South and West. This divide was mirrored in GDP and population growth across regions, with the South and West regions expanding at a faster rate than the Northeast and Midwest. The South was the fastest growing region for construction starts, rising by 11.2%. The non-residential segment led growth here with starts expanding by 25%, supported by large industrial starts in Texas and Alabama. The West region expanded by 2.4% but growth here was found solely in the civil engineering sector which rose by 28.9% thanks to pipeline and energy projects in Wyoming and rail expansions in Washington state. Northeast starts contracted by 3.2% in 2019, driven by a 17% contraction in residential starts, with population growth sluggish at 0.2%. Meanwhile, the other two subsectors expanded in the Northeast as they overcame contractions in 2018 driven by mega projects from 2017 dropping out of the calculation. Starts in the Midwest fell by 5.4%, with declines in the residential and non-residential sectors of 7.1% and 21.7% respectively. The absence of 2018’s start on the Foxconn plant in Wisconsin exacerbated the non-residential decline. On the other hand, Midwestern civil engineering starts expanded by 29.5% backed by ground breaking on natural gas plants in Michigan.

GDP growth in Canada is estimated at 1.7% in 2019 (with data through Q3), a slowdown from the 2.0% pace recorded in 2018. The labour market strengthened in 2019, with employment averaging 19 million jobs over the year, but changes in employment levels were highly volatile across the months with employment falling by 71,000 in November, the largest drop since the global financial crisis. Average hourly earnings growth slowed to 2.6% year to date in 2019 (data through November), with private consumption cooling to 1.6% from 2.1% in 2018. Subdued growth is set to continue as households remain constrained by elevated levels of debt. Business investment improved in 2019 following contractions at the end of 2018, with steady growth in the non-residential structures segment while machinery and equipment investment was highly volatile. Net exports are set to improve for 2019, but much of this will be due to an unsustainable bump in Q2 2019 on a 26% surge in energy exports and a large one-off decrease in aircraft and parts imports which followed a significant rise in Q1.

Canadian construction starts shrank in 2019, with total starts falling by 22.1%, but much of this was a hangover from robust growth in 2018. All three subsectors contracted, but non-residential starts suffered the strongest fall, declining by 44.2%. But this was largely exacerbated by starts of large projects in 2018 falling out of the calculation, including ground breaking for a new metro line in Montreal and multiple large industrial starts across Alberta, Ontario and British Columbia. Despite this, several sectors saw robust growth, with shopping starts expanding by 160.9%, boosted by ground breaking on the $1.7 billion Royalmount Mega-Mall in Montreal and parking garages expanded by 96.0% supported by the Centre de Transport Bellechasse project, also in Montreal. On a regional basis, non-residential starts in the Atlantic Region grew by 52.1%, largely thanks to comparatively softer starts in 2018, while all other regions contracted.

Engineering construction fell by 7.4% in 2019 with all subsectors except miscellaneous engineering projects dragging on growth. Miscellaneous engineering was boosted by pipeline projects, particularly ground breaking on the Trans Mountain Pipeline Expansion for $7.4 billion. Starts on bridges suffered the strongest contraction of 69.8% largely due to the $4 billion Gordie Howe bridge linking Windsor to Detroit falling out of the calculation. Meanwhile, the power and infrastructure segment offered triple digit growth in Q3 and Q4, despite the annual figure dropping by 2.1%. This was not due to mega projects, but rather comparatively limited starts activity for the sector in 2018 over the same period. The regional story was divergent, with the Prairies and British Columbia expanding by 64.4% and 15.9% respectively, while the Atlantic Region and Central Canada fell by 64.1% and 36.1% respectively.

The residential sector contracted by 6.0% in 2019, with single family starts falling by 14.9% and multi-family starts expanding by 2.4%. There were ground breakings on several sizable multi-family projects in the second half of the year. High household debt levels and housing prices in key markets held back demand, and the fact that mortgage interest rates have remained high by recent historical standards throughout 2019 has also contributed to housing’s unremarkable performance.

This report was written by Abby Samp of Oxford Economics.