A Deadly Trade-off, a Favoring of Younger Age Cohorts, Hazard Pay and Other Nightmares

A Coronavirus Rock and a Distressed-Economy Hard Place

The number of coronavirus hospitalizations and deaths keeps climbing. Authorities in the medical community say the crest of the health crisis appears to still lie weeks, possibly months, away. 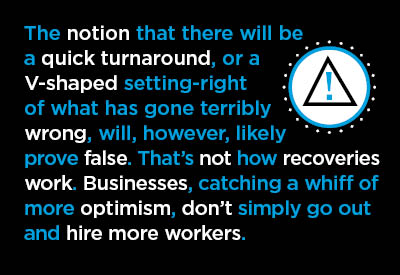 Meanwhile, measures to slow the spread of the disease through limiting personal contact have caused business closures and job losses that are sending the stock markets and business activity into freefall.

It’s the old conundrum writ large, … being between a rock and a hard place.

President Trump, clearly frustrated and with an eye towards November’s election, has said the solution shouldn’t be worse than the problem. He’s now talking about a relaxation of sequestration measures to restore some normalcy to everyday life.

He’ll be announcing his decision by March 30th.

To be clear, what’s being talked about by the President and his advisors is a distressing-to-contemplate trade-off. Boiled down to its essence, a judgement may soon be made that a higher degree of severe illness and mortality is an acceptable price to pay to cushion a falling economy.

You, dear reader, may soon be forced to decide where you come down on this issue.

A V-Shaped Recovery? Not Likely

Such a federal directive would butt heads with provisions put in place by governors at the state level and by mayors at the municipal level, so it’s not clear how widely it would be adopted anyway. Nevertheless, it would signal a change in thinking at the highest level of government.

Also unclear is the extent to which the economy can be helped at this moment in time regardless.

The U.S. harbors a nearly $22 trillion economy. The $2 trillion stimulus package being worked out in Congress will provide a backstop of sorts. Consumer spending will be supported by wage supplements and unemployment relief funds and the hardest-pressed industries, such as the airline sector, will receive survival funding.

The notion that there will be a quick turnaround, or a V-shaped setting-right of what has gone terribly wrong, will, however, likely prove false. That’s not how recoveries work.

Businesses, catching a whiff of more optimism ‒ i.e., what the President is always trying to sell ‒ don’t simply go out and hire more workers. They wait until the demand for their products and services has picked up once again. This may take an extended time period. They also need assurance that such an uplift will be sustainable.

There are suggestions that workers may be allowed to return to work based on their age cohort. For example, younger individuals up to the age of 39 may be allowed back first. A later second wave would include those aged 40-49, and so on.

Evidence is increasingly suggesting, though, that susceptibility to COVID-19 is not as age-specific as once thought.

Allowing people to return to work, no matter what their age, may backfire disastrously. Rather than helping the economy, it may result in many more health emergencies, an overburdening of medical care capacity and a sidelining of staff that will make the carrying out of normal operations impossible anyway.

There are already categories of ‘essential’ employment where worker retention is beginning to necessitate ‘hazard pay’. Amazon, to ensure it can meet greatly expanded demand from shut-in customers, has committed to paying its workers more. WalMart, as a key remaining walk-in destination for shoppers seeking groceries and other retail items, is implementing staff bonus payments.

Many banks have been shuttering local branch operations, but where service remains in place, compensation for front-line tellers is being increased.

Intimations of Discontent Among Construction Workers

Not all at-risk workers are satisfied with a pay hike. Construction activity has remained largely ongoing throughout the U.S. and Canada during the coronavirus-induced meltdown.

On the other hand, notable for stringent restrictions on construction activity have been Boston, Pennsylvania and Quebec, where non-critical job sites have been ordered closed.

But construction union representatives are becoming more vocal in their condemnations of what they perceive as workplace health violations. At the very least, there are calls for better government directives and mandates on best-practice distancing between workers (e.g., six feet), more hand sanitizing stations and higher ‘porta-potty’-to-personnel ratios.

If, on March 30th, the Trump administration does backtrack on its keep-at-more-than-arms-length directives, it will be an outlier versus other nations. (Except for those nations, such as China and possibly South Korea, that believe they are on the far and waning side of peak contamination.) Hong Kong relaxed its watchfulness, only to see a resurgence in coronavirus contagion.

Furthermore, with much of the rest of the world in lockdown, U.S. foreign trade will continue to suffer the bedevilment of international supply chain interruptions.

VICTORIA, B.C. — The province has confirmed that its order prohibiting mass gath...

Remembering the impact of 1918 Spanish Flu outbreak on B.C. workers

As the threat of the coronavirus looms over Canada, one doesn’t have to look too...

In response to the COVID-19 pandemic, the Canadian and U.S. governments have dec...

As B.C. cases of COVID-19 continue to rise, construction workers are being told...

Work has moved above grade on the new eight-storey Ken and Marilyn Thomson Patie...

A 50-foot wide hole excavated 150-feet into bedrock below a six-level undergroun...