Complete coverage of the pandemic's impact on construction
Home News Economic May U.S. Retail Sales Back from the Brink
Economic

May U.S. Retail Sales Back from the Brink

Lines that Sink, Bob Back Up and Soar

There are some eye-catching results to be observed from the Census Bureau’s Advance Monthly Sales for Retail and Food Services, May 2020 report. After shopkeepers posted terrible results in April, there were some astonishing bounce-backs in May. 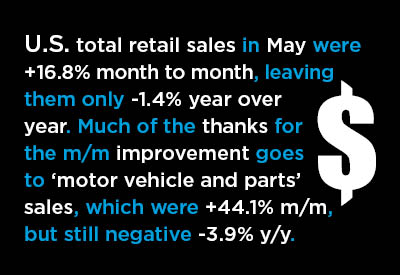 The following seven graphs mainly speak for themselves. There are lines that plummet severely and stay depressed. But there are also lines that sink sharply, then soar again. And in at least one instance, for non-store retailers, there’s a curve that shoots directly upwards in a manner almost never seen anywhere else before.

Auto dealers have been offering once-in-a-decade pricing discounts and financing deals. The last time there were comparable bargains was during the 2008-09 recession. (In those days, two of North America’s Big Three automakers needed to seek bankruptcy protection.)

The last data points are for May 2020.
Adjusted for seasonality and trading day differences, but not for price changes (i.e., figures are in ‘current’ dollars).
Data source: Census Bureau / Chart: ConstructConnect.

The second largest contributor (at 19.3%) to total U.S. retail sales in May was the ‘non-store’ category. ‘Non-store’ includes retailers who sell mainly over the Internet or through electronic auctions.

Sales by non-store retailers were a commendable +9.0% month to month, but an outstanding 30.8% year over year in May (Graph 3).

Graph 4 shows the volume of non-store retail sales ascending steeply, in a manner that few retailers would ever let themselves dream of achieving, knowing they would almost surely be disappointed.

Glimmers of Light for Restaurants and Bars

Now that re-openings are underway, ‘food services and drinking places’ are doing a little better. Their May sales were much improved month to month, +29.1%, but they remained underwhelming year over year, -39.4%.

Graph 6 also highlights a hospitality sector that has been hurt by the pandemic far more than the retail side of the economy.

*"Year over year" is each month versus the same month of the previous year. Latest data points are for May 2020.
Current dollars, with adjustments made for seasonal variation, holiday & trading day differences, but not for price changes.
Data source: U.S. Census Bureau (Department of Commerce) / Chart: ConstructConnect.

As for retail sales that relate most directly to home ownership, renovation activity and new residential construction, Graph 7 sets out crucial disparities.

With respect to items purchased for use in the home, ‒ i.e., ‘furniture and home furnishings’ and ‘electronics and appliances’ ‒ their sales volumes were still deeply negative year over year in May, each down by nearly one-third on a three-month moving average basis.

On a positive note, though, sales of ‘building materials and garden equipment’ were quite sprightly, +8.5% y/y (again, as a three-month moving average.)

It would seem there’s a lot of home remodeling going on and/or many individuals have become resigned to staying put this summer and are choosing productive yardwork to occupy their time.

*"Year over year" is each month versus the same month of the previous year.
Based on three-month moving averages of current dollar adjusted data. Latest data points are for May 2020.
Adjustments are for seasonal variation, holiday and trading day differences, but not for price changes.
ata source: U.S. Census Bureau (Department of Commerce) / Chart: ConstructConnect.

As with most things pandemic-related, it’s hard to know where the cost of...