Omicron! A word that is perfect for the times. It would be easy to imagine it originating in some fictitious techno-saturated super-villain universe that has risen to prominence in popular culture. Seemingly, it’s a virus label chosen to generate maximum angst. 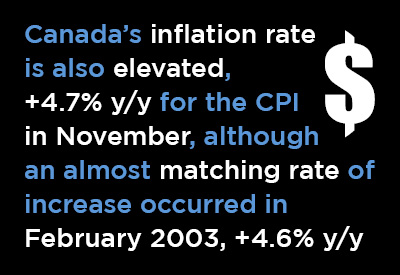 In the fall of this year, just when it seemed the coronavirus scare was receding, and an enjoyment of old pleasures might soon be possible, the Delta variant sprang up. As a wrecking ball, though, it was soon surpassed by the vastly more transmissible Omicron offshoot of the coronavirus.

The U.S. seven-day average COVID case count currently stands at 239,000, only slightly below last January’s peak of 250,000. The single day count of 543,000 just recorded on December 27th was an all-time high, with little indication there won’t be further ascensions to come.

There’s consolation to be found, however, in Omicron’s symptoms proving, so far, to be less severe and its outcomes less lethal than when COVID originally struck.

The pandemic has been 2021’s biggest news story. Due to its widespread ramifications, it’s also been the year’s biggest economics story.

Price stability has been a prime casualty of the pandemic. Workers becoming ill and needing to stay off the job, both in the U.S. and in supplier countries, launched an era of shortages that threatens to drag on well into 2022.

November’s U.S. inflation rate, at +6.8% year over year for the all-items Consumer Price Index (CPI), was a full percentage point ahead of this century’s previous peak of +5.6% y/y in July 2008.

Every industry has a story of some key component or another, most often coming from a foreign country, that can’t be acquired. In the case of the auto sector, it’s been computer chips.

A Fundamental Problem of Logic for the Fed

The big significance of inflation behaving more boldly lies in what the Federal Reserve will do about it. Chairman Jerome Powell has gone on record stating there will likely be three increases to the federal funds rate next year.

Markets initially reacted with horror at the suggestion. A recognition of mitigating circumstances, however, has helped restore calm.

If the three increases are of only 25-50 basis points each (100 basis points = 1.00%), that will continue to leave interest rates quite low. Assume 50 basis points each time and the fed funds rate will still be at only half what used to be considered its ‘neutral’ or long-term desired level of 3.00%. (3.00% has been judged optimal because it provides wiggle room. When stimulus is needed, the rate can be lowered several times without running into the problem that would occur if it were tried today, a descent into negative interest rates.)

The Fed may talk about raising interest rates, but the resurgence of infections due to Omicron raises a fundamental problem of logic.

How can the Fed justify interest rate hikes as the economic recovery becomes less assured?

Canada’s inflation rate is also elevated, +4.7% y/y for the CPI in November, although an almost matching rate of increase occurred in February 2003, +4.6% y/y.

As with the U.S., the pandemic is undoubtedly Canada’s biggest economic story from 2021. And the resulting sharp climb in inflation also warrants yearend wrap-up attention (see Charts 3 through 7).

For Canada, though, there are some big or turnaround positive developments to spotlight.

Monthly seasonally adjusted and annualized housing starts in Canada have a long history of fluctuating in a narrow band around 200,000 units. For the first time ever, they crossed above 300,000 units in 2021 and not just once, but in three months, January, March, and November.

Plus, for the first time in a decade, Canada’s monthly merchandise trade balance has been in surplus more than in deficit (eight months to two through October). Consistent surpluses prior to the 2008-2009 recession made it much easier to achieve solid GDP growth.

In Canada’s case, one of the factors sending inflation soaring, significant upticks in many commodity prices, is also proving at times to be beneficial (e.g., the merchandise trade improvement that is coming from better world energy prices). 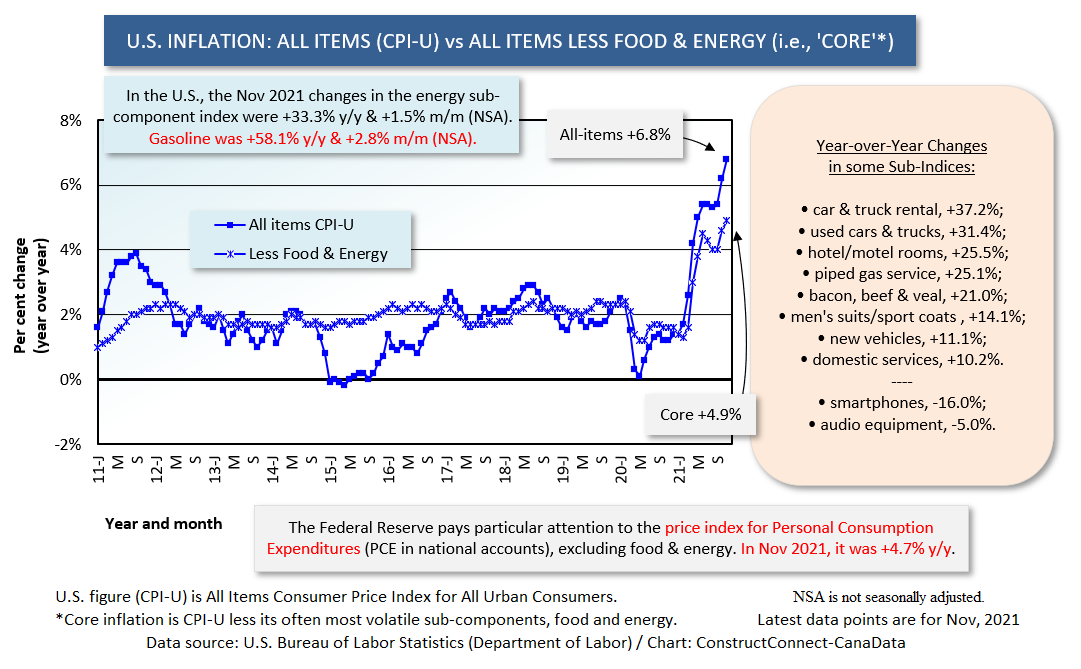 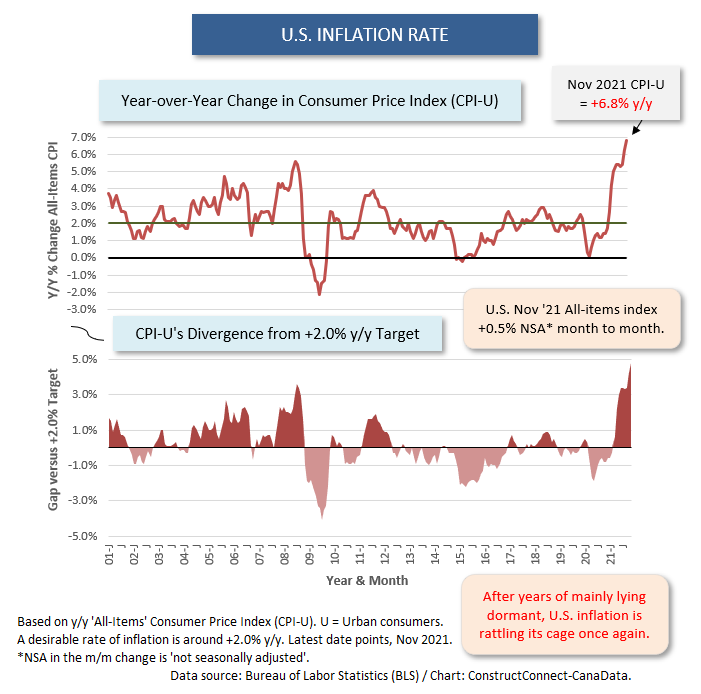 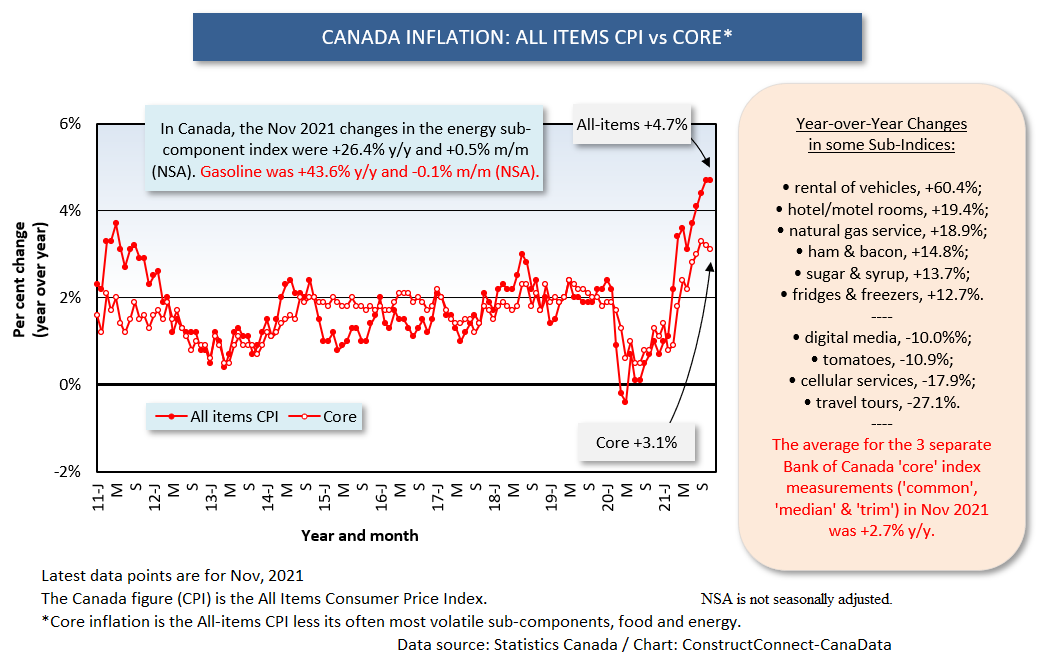 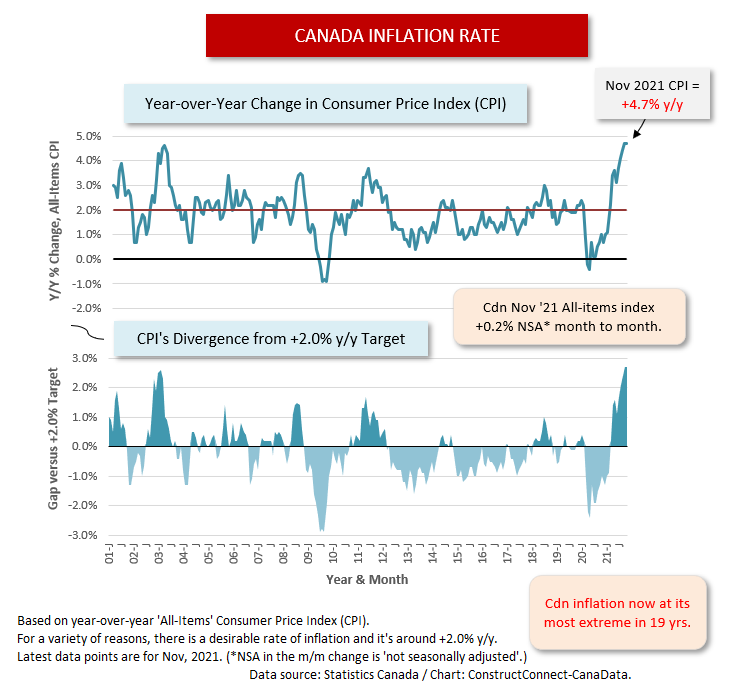 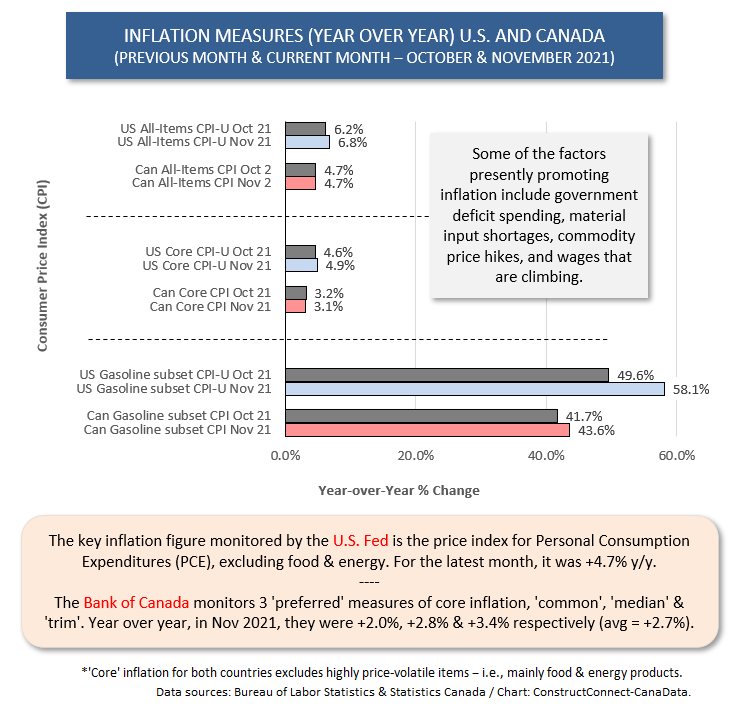 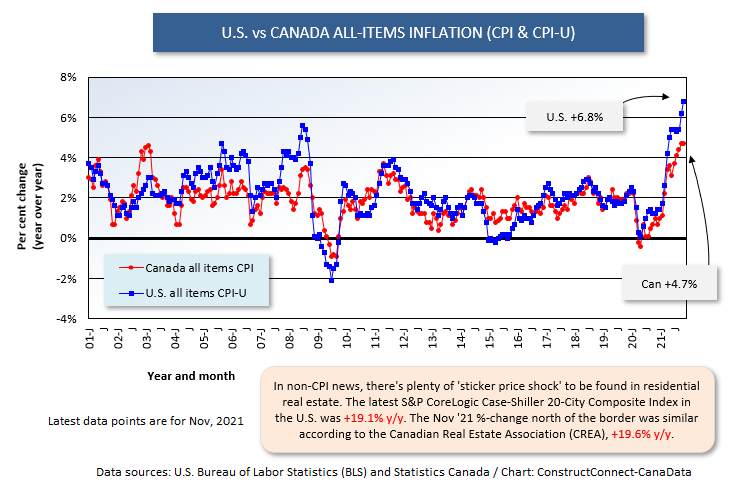 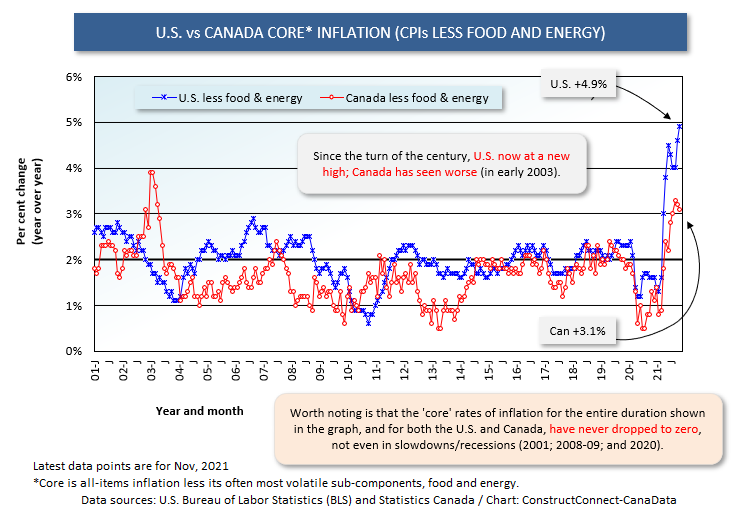