Manitoba’s 2019 budget, which boasted $1 billion in strategic infrastructure spending, didn’t reveal many big surprises for builders in the province.

“I can’t say we are totally thrilled, but I wouldn’t say we are very surprised,” said Dustin Pernitsky, communications manager for the Winnipeg Construction Association. “Every message from government suggested we shouldn’t expect a lot of vertical infrastructure.”

The budget will spend $350 million on highway projects and 45 million in additional funding for roads to “commemorate Manitoba’s 150th year.”

The budget allocates funds to upgrade Headingley Correctional Centre and the Manitoba Centennial Centre. It also will fund improvements to airports at St. Theresa Point, Norway House and Shammattawa. Municipalities will see more flexible funding for roads and bridges and other infrastructure projects.

While the province touted its $1 billion in infrastructure spending, Pernitsky explained this is far less impressive than it seems, as most of these projects, if not all of them, have previously been announced and some are even already under construction.

However, Pernitsky was surprised to see a PST reduction in the budget, which the association expected to be included in next year’s budget.

Premier Brian Pallister will follow through with his 2016 election pledge to return the PST to seven per cent. The change will take place on Canada Day.

Pernitsky explained the association doesn’t have many concerns about the change and feels the government has done a good job to prepare the industry.

“I don’t think we will see a huge slowdown because there has been a lot of growth in the past five or 10 years,” said Pernitsky. “It will plateau if anything. In the long-term it will be good for the industry.”

Pernitsky explained the PST change does create an issue for those in the industry already in contracts. But the government has released documents that outline the rate reduction transition rules which Pernitsky said were clear. He added the province also has the benefit of having gone through a PST change before.

In a press release, the Manitoba Heavy Construction Association (MHCA) noted the province held Manitoba Infrastructure’s Highways Capital program to $350 million and lowered expenditures for water-control structures from $103.6 million in 2018 to $65 million – roughly half of which is expected to fund the Lake St. Martin outlet channels project.

MHCA president Chris Lorenc said the reduction of water infrastructure funding is concerning and likely due to delays on the channel project.

“We are interested in the additional investment in highways and roads, in these commemorative projects and will be looking for details in the next weeks,” Lorenc said in a release shortly after the budget was made public.

In response to the PST change from six per cent to seven per cent, the association said the change will reduce tax revenues to the treasury by $237 million this year, and by $325 million for a full year.

“Manitoba has a $9-billion infrastructure investment deficit – that is the estimate of how much it would cost to bring our highways and bridges up to good condition,” Lorenc said. “At current Highways Capital program budgets, that deficit is compounded every year. We need a long-term, sustained investment plan to give Manitobans the quality of highways they deserve and need, to ensure their economy can grow.” 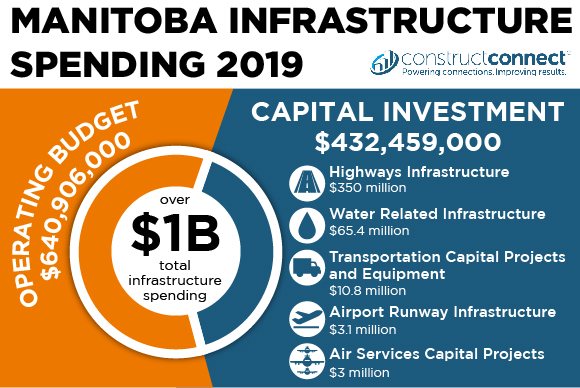 A key Manitoba infrastructure stakeholder is questioning the province’s commitme...

Frustrated with being “ignored,” construction leaders in Manitoba are speaking o...

WINNIPEG — The Canadian Environmental Assessment Agency has launched a consultat...

UBC students look at viability of high-speed rail to Whistler

Alpine enthusiasts could one day be whizzing to Whistler for skiing via rail if...

A who’s who of top economists in Canada shared predictions on the pandemic and t...

WINNIPEG — The federal government has announced funding that will establish Clim...

WASHINGTON — If Joe Biden's decision to kill off Keystone XL is supposed to soun...

Russia: Gas pipeline to Germany at risk after US sanctions

MOSCOW — Russian state gas company Gazprom acknowledged there is a risk that its...