In U.S., a Quarter Million More Jobs Doesn’t Cut It

According to the Bureau of Labor Statistics (BLS), the U.S. total jobs increase in November was +245,000. That would have been a decent enough number to report ‘back in the day’ when a coronavirus-like attack was unimaginable. But having gone through an unprecedented decline in employment in the Spring of this year, +245,000 is but a drop in the bucket compared to what’s needed to fully restore good health to the U.S. jobs market. 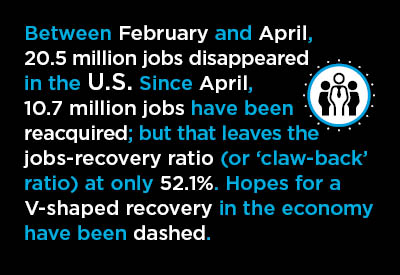 The +245,000 number for November is down from the +610,000-figure recorded in October, which was itself considered disappointing. The extent of the problem is highlighted in Table 1. Between February and April, 20.5 million jobs disappeared in America. Since April, 10.7 million jobs have been reacquired; but that leaves the jobs-recovery ratio (or ‘claw-back’ ratio) at only 52.1%, or just slightly more than half. Hopes for a V-shaped recovery in the economy have been dashed.

The not seasonally adjusted (NSA) unemployment rate in the latest month was 6.4%, less then the month prior’s 6.6%, but considerably worse than the level a year ago of 3.3%.

The construction and manufacturing sectors picked up the same number of jobs in November, +27,000 each. Construction is outshining manufacturing, however, in terms of jobs recovery, 71.4% to 55.0%.

Construction’s NSA unemployment rate in the latest month, at 7.3%, was not as elevated as what some other industrial sub-sectors have been experiencing. ‘Leisure and hospitality’ currently has a jobless rate of 15.0% and ‘mining, quarrying, oil and gas extraction’, 19.2%.

Nearly all major industrial sub-sectors managed increases in their nominal levels of employment in November. Retail, though, shed jobs (-35,000), as did government (-99,000). Almost all the jobs decline in the public sector was at the federal level (-86,000), as temporary hiring to conduct the 2020 Census ran its course.

Year-over-year compensation increases in U.S. construction in November remained quite modest, +2.7% hourly and +2.2% weekly, including supervisory personnel. Leaving out bosses, the hikes were +2.9% hourly and +1.8% weekly.

Relative to its population, Canada saw a bigger bump in employment in November than the U.S. Statistics Canada has reported a jobs-gain north of the border totaling +62,000. (The population of the U.S. is nine times greater than Canada’s.)

The headline SA unemployment rate in Canada, though, is ‘looser’ or less stringent than its American counterpart.

There’s an ‘R3’ NSA Canadian unemployment rate calculated by Statistics Canada that adopts the same tighter methodology ‒ i.e., concerning who is ‘gosh-darned’ seriously looking for work ‒ as is utilized in the U.S. Canada’s latest R-3 number is 6.8%, not far off the U.S. NSA unemployment rate of 6.8%.

Construction employment in Canada in November climbed by +26,000 jobs.

Also noteworthy in the latest Canadian data set was the substantial difference between private sector employment (-3.6% year over year) and the public sector (+1.6% y/y).

Provincially, Alberta still draws attention for being seriously in the doldrums. Its year-over-year total jobs performance is a dismal -5.2%, while its joblessness has soared to 11.1%.

The ‘squall’ days for the province’s key energy sector, however, may be about to break. The global price of oil has been coming out of hibernation, moving up to $45 USD per barrel, after being stuck at $30 for so long.

Nova Scotia has the lowest unemployment rate among provinces, 6.4%. Saskatchewan is only a step behind, at 6.9%. B.C., Manitoba and Quebec have jobless rates just above 7.0%.

Ontario would like to be doing better. Its unemployment rate is 9.1% and its record with respect to total number of jobs is -2.9% year over year.