Tame for Now, Is Inflation Preparing to Roar? 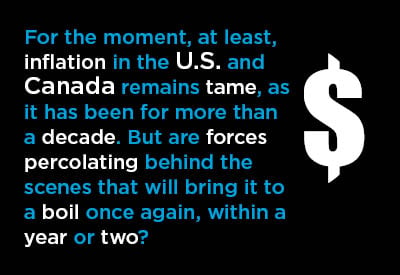 But they don’t rely on just the ‘headline’ all-items Consumer Price Index (CPI), nor its ‘core’ variant which leaves out purchased items that often display inordinate price volatility ‒ i.e., mainly in the food and energy realms.

The Federal Reserve’s ‘go-to’ measure on inflation is the price index for Personal Consumption Expenditures (PCE), excluding food and energy, found in Table 11 (under ‘Addenda’) in the monthly Personal Income and Outlays report published by the Bureau of Economic Analysis (BEA).  This index is believed to be more attuned to what people are actually buying than the CPI calculated by the Bureau of Labor Statistics (BLS), which relies on a survey of a hypothetical ‘basket of goods’.

While still relying on a basket of goods (comprised of 55 items), the Bank of Canada concentrates on three modifications of Statistics Canada’s all-items CPI: ‘common’, ‘median’ and ‘trim’.

A detailed technical explanation of ‘common’, ‘median’ and ‘trim’ can be accessed at this link: https://www.statcan.gc.ca/eng/statistical-programs/document/2301_D64_T9_V2

The discussion so far has identified eight price indices, three for the U.S. and five for Canada.

None of them currently lies above +2.0% y/y, the ‘tipping’ point when inflation needs to be taken more seriously.

But that’s not the end of the matter and we’ll consider the prospects of inflation heating up two sections along from here. 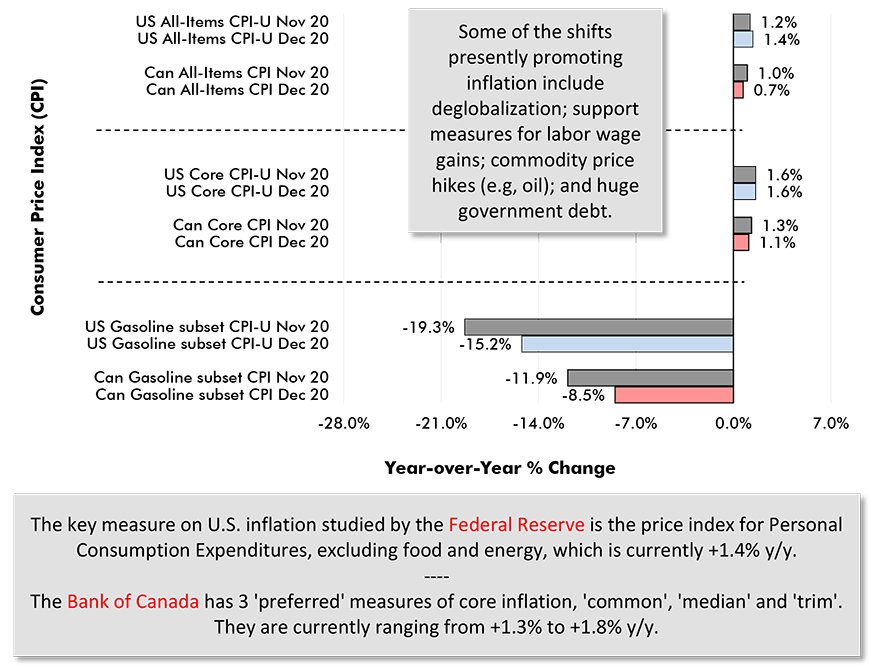 Some of the notable U.S. price movements in December 2020 were as follows.

And below are some of the noteworthy Canadian price hikes or reductions in December. 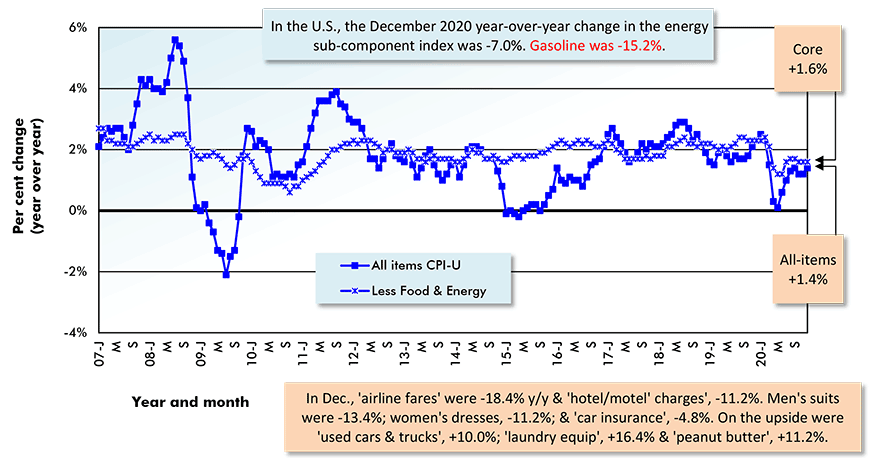 The latest data points are for December 2020.
The U.S. figure (CPI-U) is the All Items Consumer Price Index for All Urban Consumers.
*Core inflation is CPI-U less its often most volatile sub-components, food and energy.
Data source: U.S. Bureau of Labor Statistics (Department of Labor).
Chart: ConstructConnect.
Graph 3: Canada Inflation: All Items CPI vs Core*
(Not Seasonally Adjusted) 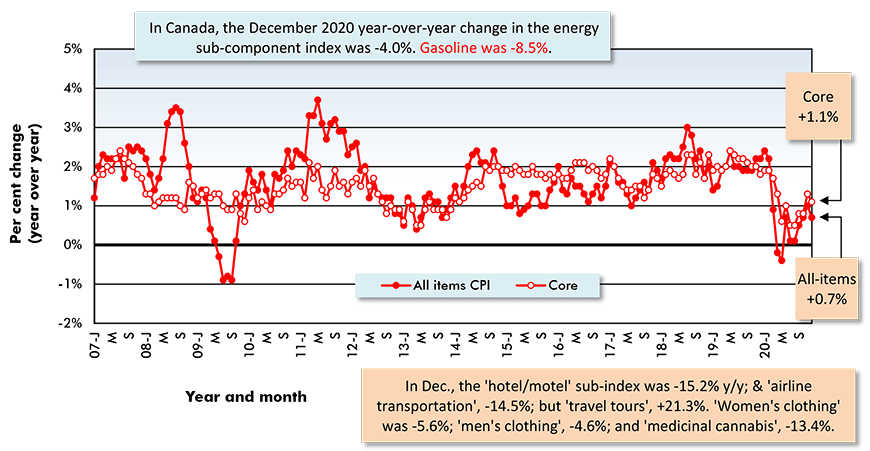 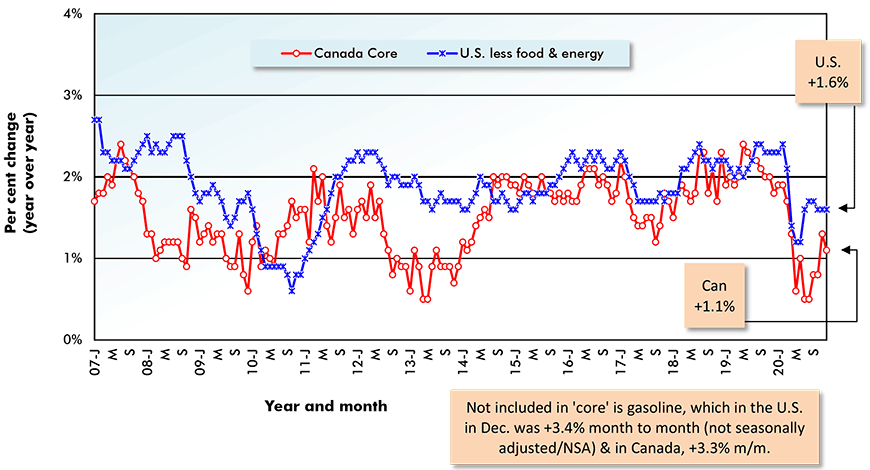 For the moment, at least, inflation in the U.S. and Canada remains tame, as it has been for more than a decade. But are forces percolating behind the scenes that will bring it to a boil once again, within a year or two?

Perhaps the chief argument for a coming price flare-up speaks of a surge in demand for goods and services that will overwhelm supply. This draws support from the spike in the savings rate, which at 16.4% in 2020 was two-and-a-half times more than its 30-year annual average.

Eventually, cash reserves accumulated while everyone has been staying home during the pandemic will be released in a torrent of purchases, when the confidence to exit the premises and roam around has been restored once again.

The contrary case rests on there being so much excess capacity in the economy that any temporary shortages that develop will be easily overcome.

Portions of the economy, including residential construction, are doing extraordinarily well. In the latest gross domestic product (GDP) report published by the BEA, the quarter-to-quarter annualized changes in residential investment in Q2 and Q3 2020 were +63.0% and +33.5% respectively. (The comparable ‘non-residential structures’ capital spending figures were -17.4% and +3.0%.)

Evidently, government support payments dispersed throughout the economy have supported solid wage hikes. Average hourly and weekly year-over-year earnings for all U.S. jobs in December 2020 were both slightly above +5.0%.

Admittedly, the +5.0% advance is partly because many low wage earners, with traditionally more tenuous employer-employee working arrangements, have lost their positions and are no longer part of the y/y ‘all jobs’ compensation calculation.

Nevertheless, wages do appear to be on the move again and will receive further impetus from deglobalization efforts and measures likely to be taken by the new administration in Washington.

There’s the fond hope that labor shortages in one corner of the economy (e.g., residential construction) can be rectified by moving newly freed workers (e.g., in accommodation and food & drink services) over from another.

The reality, though, is that such ‘career’ mobility usually proves to be frustratingly sticky. 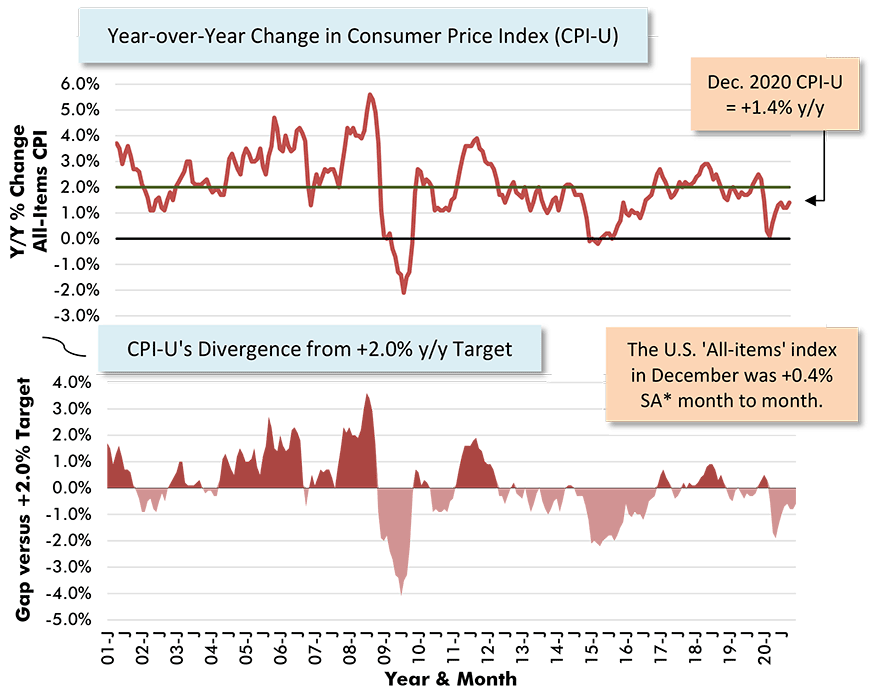 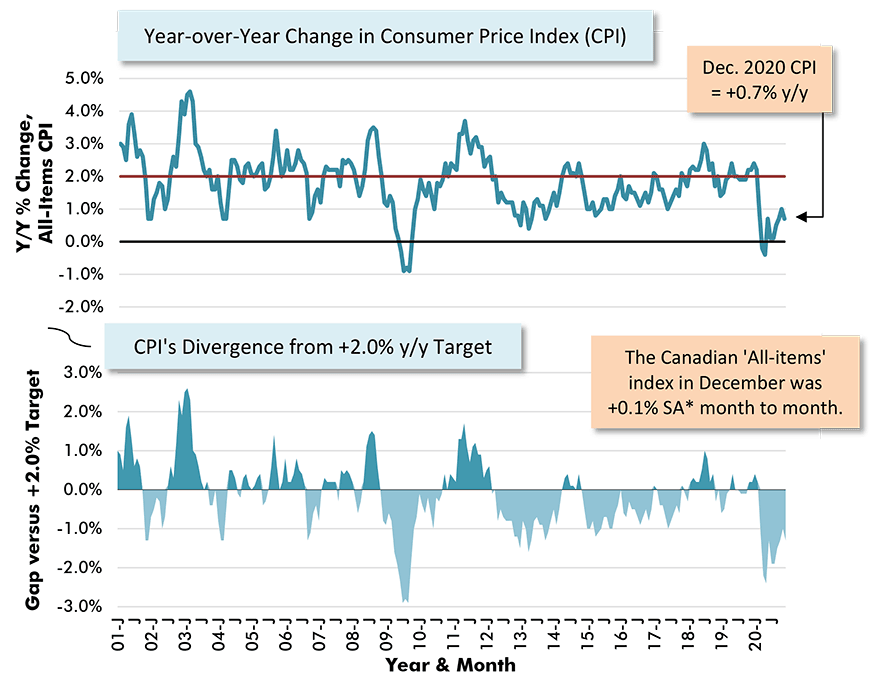 Based on year-over-year ‘All-Items’ Consumer Price Index (CPI-U), not seasonally adjusted (NSA).
For a variety of reasons, there is a desirable rate of inflation and it’s around +2.0% y/y.
Latest data points are for December 2020.
Data source: Statistics Canada.
Chart: ConstructConnect.