This latest version of the mid-month Nuggets report, rather than proceeding in point form, discussing recent data releases, will be expository concerning some of the most important economic issues of the day. 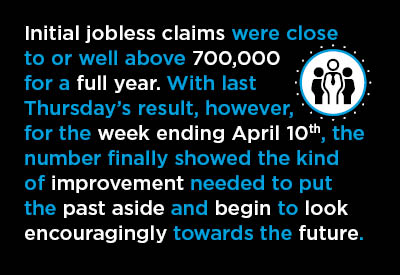 Until last Thursday, April 15th, whenever thoughts of a considerably cheerier economic outlook arose, there was a giant BUT that stood in the way. Weekly initial jobless claims as a leading indicator continued to be stuck in the stratosphere. How could one speak confidently of an upcoming surge in demand when the number of individuals seeking unemployment insurance for the first time remained higher than the peak level in the previous recession, 2008-2009 (see Graph 1).

Initial jobless claims were close to or well above 700,000 for a full year, after the coronavirus pandemic first lit into the economy in mid-March of last year. With last Thursday’s result, however, for the week ending April 10th, the number finally showed the kind of improvement needed to put the past aside and begin to look encouragingly towards the future. It dropped by -193,000 to settle at 576,000, finally descending through the 600,000-benchmark. There’s legitimate hope that in short order it will break through 500,000, then 400,000, as well. (The month-to-month pickup in total U.S. employment in March exceeded a million jobs, including the revision to February’s originally reported number.)

By mid-Summer, provided no additional waves of COVID-19 or its variants have waylaid the process,  ̶  the likelihood of which should be held in check by the ‘full court’ vaccination press  ̶  a quickening tide of general economic recovery will also be pulling in more sectors that have been languishing in the shade for a full annual period. There are pent-up demands in socializing, concert-going, ‘dining-out’, ‘cruising one’s local mall’, medical care and travel that are craving to be released. Never mind business trips, millions of American are addicted to tourism travel, and watch out when that presently walled-up dam is opened. 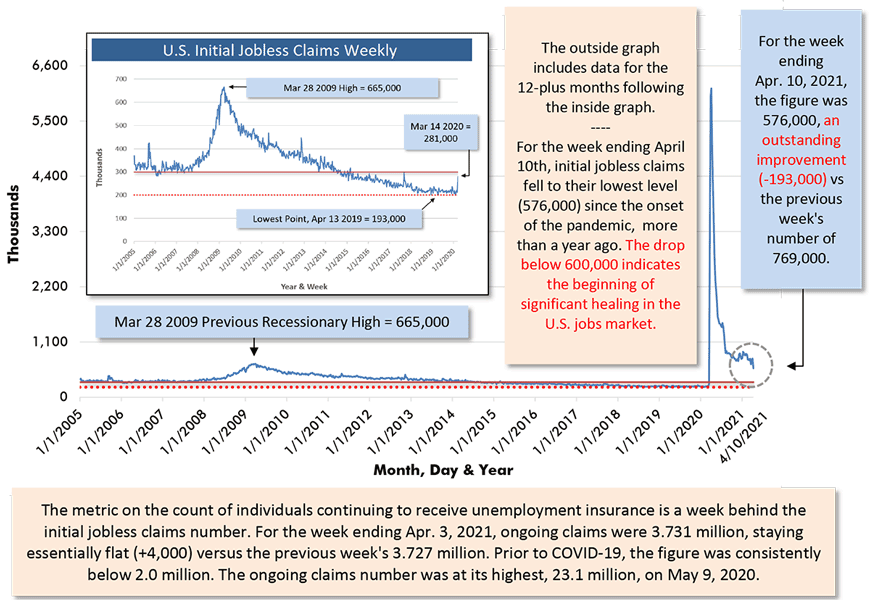 Truthfully, concern for the economy seems now to be moving in another direction. There exists the possibility that supplies of many items, and the labor to make them and ship them, may not be able to keep up with the acceleration in orders that is expected. High-profile shortages include paper products (a problem that’s been around since the start of the pandemic), other forestry products (lumber; plywood), canned beverages (as counterpoint to the decline in demand for ‘fountain’ drinks in bars and restaurants), computer chips and even plastic ketchup packages.

The ‘chips’ shortfall has slowed auto sector output. The working-from-home trend has diverted purchases of some computer electronics away from motor vehicle and parts production. Another factor being cited is the significant ramping up of cryptocurrency mining in China, which requires vast computer processing capacity.

For the construction industry, Table 1 sets out some of the extreme cost hikes that have been occurring for major building materials, caused mainly by suppliers being surprised by stronger-than-anticipated single-family home building. Plus, this is happening while global recovery is in early-stage recovery and before massive infrastructure spending packages recently launched in China and proposed for the U.S. have had anything like their full impact on commodity prices. 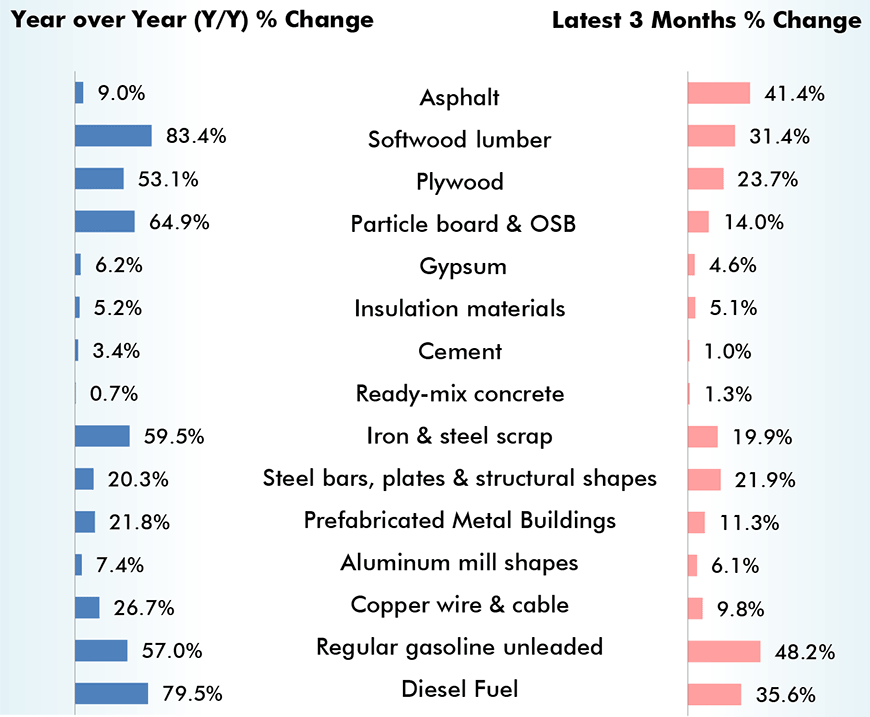 Questions concerning why construction activity has been designated ‘essential’ with the pandemic raging around it should finally have been put to rest. One prime means to resolve availability issues surrounding consumer goods and business inputs is capital expenditures on production.

Deglobalization, an answer to the international supply chain flaws exposed by the pandemic (with Chinese factories closing in the earliest stage and leaving American producers high and dry) comes with its own short-term challenges with respect to order fulfilments and logistics. New relationships need to be established.

Boosted by deglobalization and by the new USMCA, there’s an owner category of construction that appears set for a take-off, manufacturing. Also, the Biden Administration has made clear its intention to help the U.S. manufacturing sector regain more of its former vibrant standing, although it’s not obvious where the proposed increase in the corporate tax rate (from 21% to 28%, although still down from the 35% of several years ago) fits with this strategy.

By the way, the merger of CP Rail with Kansas City Southern (KCS), to roll cargo over one system between Canada and Mexico, and always through America, is being promoted as an attempt to take full advantage of the USMCA.

Finally, there’s the labor side of input costs to consider. For ‘all jobs’ in the U.S. in March, compensation increases year over year were +4.2% hourly and +6.7% weekly. Limiting the analysis to only non-supervisory personnel, the earnings gains were even heftier, +4.4% hourly and +7.2% weekly.

Switching geography to Canada, the y/y wage climb for all employees in March was +2.1% hourly and +0.9% weekly. Statistics Canada breaks the data further into union and non-union results. For the former, the climbs were +2.5% hourly and +2.0% weekly; for the latter, +1.9% and +0.4%. There’s also a full-time versus part-time comparison, which was +2.4% versus 0.0% respectively in the latest month.

It will be interesting to see to what extent U.S. attempts at deglobalization impact Canadian firms, given the USMCA, the traditional close ties between mainly southern head offices and northern subsidiaries, and the import appeal of the lower-valued Canadian dollar.

Please click on the following link to download the PDF version of this article:
Economy at a Glance Vol. 17, Issue 62 – ConstructConnect’s Mid-April Economic Nuggets, With an Emphasis on Supply Shortages & Costs – PDF