8 Mid-February Economic Nuggets, with an Emphasis on Inflation

As a month, February is habitually a few days short, but that doesn’t make it less than mighty.

In this most recent February, there’s been a doping controversy in the women’s figure skating event at the Winter Olympics. Vladimir Putin has been having a will-he or won’t-he attack moment along Russia’s border with Ukraine. Anti-vax truckers have been pinching off U.S.-Canadian entry points. 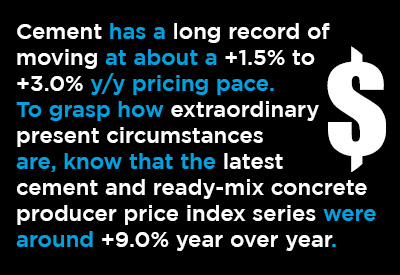 Also, we’re in the 24th month of a pandemic in North America, compounding the isolation that comes at this time of year anyway, from the stretching out of winter. Inflation has been going through the roof, making Valentine’s Day disgracefully expensive. (Sorry, I just threw in that last bit, which I’ll be sure to regret, when my wife reads it.) And the Queen has COVID; and there still aren’t enough quality new shows to stream on TV.

Against the foregoing backdrop, there are the following nuggets to be gleaned from the latest public and private sector data releases.

(1) These are rare days for cost and price increases. West Texas Intermediate crude (WTI) has crossed above $90 USD per barrel. Brent crude is a few dollars more expensive. A mixed bundle of Canadian oil is around $80 USD per barrel. And Western Canadian Select (WSC), which is ‘heavy’ oil, is priced in the mid-$70 USD range. World demand is up, with economies far and wide springing back to life after severe pandemic-induced setbacks. But there’s also a negative geopolitical influence at play, with Russia perhaps on the cusp of invading Ukraine. Possible strategic and retaliatory measures threaten to sever crucial oil and natural gas supply lines.

(2) It’s become commonplace to see big year-over-year increases in the prices charged for lumber and steel and many other building material inputs. Most of those goods, however, have a history of volatility in pricing. There’s one set of materials with price advances that are quite uncharacteristic of their usual steady pattern through good times and bad. Cement has a long record of moving at about a +1.5% to +3.0% y/y pricing pace. To grasp how extraordinary present circumstances are, know that the latest cement and ready-mix concrete producer price index series were around +9.0% year over year.

(3) How can contractors protect themselves against rising costs? In previous periods of exceptional inflation, ‘escalation’ contracts were commonplace. In an escalation contract, an agreed upon winning bid price is automatically adjusted upwards based upon the performance of some independent measure, such as the Consumer Price Index.

(4) Another hedge is to stockpile inventory. This implies a greater need for storage space. It’s an interesting twist that higher prices are boosting the demand for a segment of building activity that is already experiencing a boom, warehousing. Plus, there’s an added wrinkle. Some general contractors and sub-trades are being placed on ‘allocation’ by suppliers. Due to timing issues, they may not need their allotment when it becomes available, but they’ll want to accept it regardless. They’ll need some place to keep it safe.

(5) According to the latest Producer Price Index (PPI) data from the Bureau of Labor Statistics, bid prices in the U.S. have finally cast off their wariness and were +16.1% year over year in January. Even at such a sizable ‘pop’, they were still well short of the +26.4% y/y average for two PPI indices designed specifically to capture material cost advances (Graph 1). 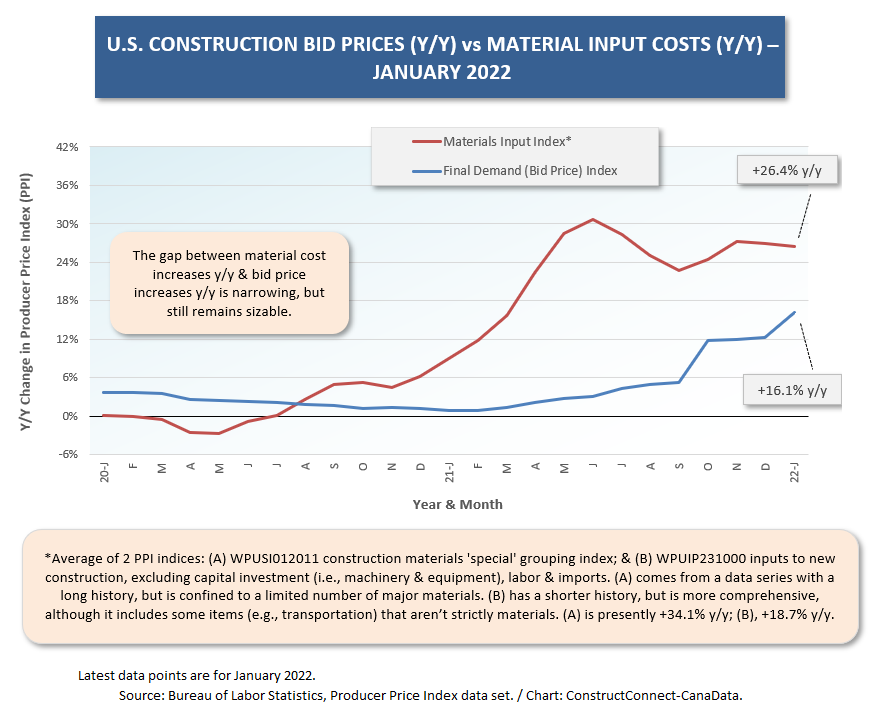 (7) How do today’s inflation woes stack up versus previous periods of rapid price advance? U.S. inflation reached a half-century high of +14.6% y/y (approximately twice today’s rate) in April 1980. A double-digit CPI percentage-change increase persisted from Spring 1979 through Fall 1981. As a countermeasure, the Federal Reserve raised its key policy setting interest rate to a peak of 20.0% (March 1980). Contrast that scenario with the Fed’s present talk of lifting, in gradual stages, the federal funds rate off a floor of nearly zero to somewhere approaching 2.00%-to-3.00%. Who can deny that we’re getting off easy?