Economic and Other Consequences of Putin’s Unilateral War on Ukraine

Consider this article an addendum to my usual monthly Nuggets report. Here are some of the economic and other consequences of Russia’s unilateral war on Ukraine.

After two years of intense anxiety tied to the coronavirus, who needs this? One man, apparently, Vladimir Putin. Even his coterie of ‘yes men’, if they’re being honest, can’t believe this Ukraine invasion is a good idea.

What we’re seeing is an example of one of the extreme dangers when a citizenry comes under autocratic rule. Such a leader can go down a dark path and take all his or her countrymen, willingly or not, with them. A whole nation then becomes designated an international pariah.

Ukraine has a population roughly equivalent to California and Canada. Its land mass covers an area approximately the same size as Texas or Alberta.

With occupation, will come overlords and intense patriotic resistance that will drag on forever.

Taking over Ukraine, which in 1991 voted 92% to separate from the Soviet Union, will be an enormous pungent bite to swallow.

It’s easy from a North American vantage point to take comfort in our geographic distance from the conflict.

But I have no doubt that many of us have awakened this morning with a great deal of sympathy for the people immersed, through no fault of their own, in a nightmare scenario on the other side of the world. 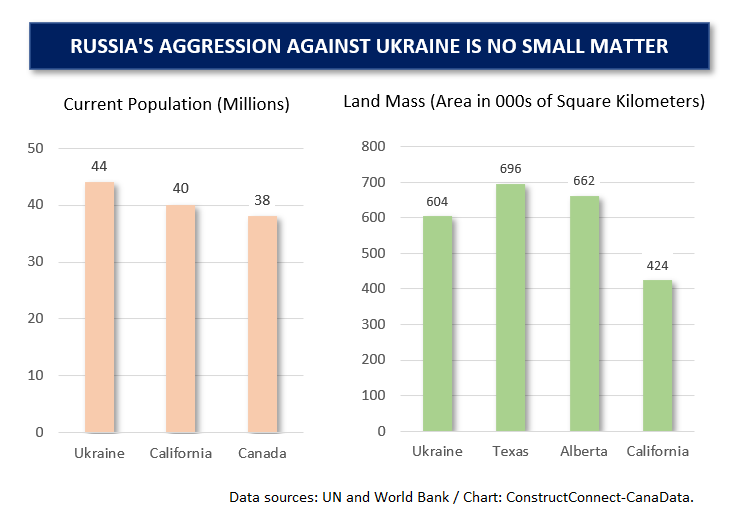 The issues impacting the construction industry were, in many ways, intrinsically...

BENGALURU, India - For renewable energy companies in India, it's a good time to...

Canada’s Economy is Much More than Raw Materials. Nevertheless, …

Canada has become much more than a natural resource-based economy. Nevertheless...

Only in recent months has a consensus developed that the global economy is likel...

Carpenters’ do what it takes to support Ukrainian refugees

The Carpenters’ Union in Ontario is pulling out all stops to help Ukrainians who...