Statistics Canada’s new Labour Force Survey report expels the bad memories from the previous month. The -200,000 net jobs figure for January was pushed aside by the +337,000 number for February.

The services-producing sector, at +293,000 jobs, accounted for the bulk of the big employment increase, but construction made a strong showing as well, +37,000 jobs. In the first two months of this year, Canadian construction has added +60,000 positions. 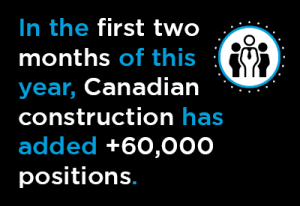 Manufacturers held even with staffing (+1,000 jobs) in the latest month and they are now employing -9,000 workers compared with the end of last year.

Canada’s seasonally adjusted (SA) unemployment rate is 5.5%, which sits noticeably above the U.S. ‘headline’ rate of 3.8%. But when the not seasonally adjusted (NSA) calculation for Canada is altered to adopt the same methodological approach as utilized by the Bureau of Labor Statistics, the NSA U rate north of the border becomes 4.5% compared with 4.1% in America. In other words, they’re basically indistinguishable.

But the most dramatic change in NSA U has come in the ‘accommodation and food services’ sector. A year ago, workers in this nook of the economy were struggling with an NSA U rate of 15.6%. Restaurant and bar closures were still the order of the day, in an attempt to beat back COVID infections.

Even as recently as in January of this year, the metric was 12.9%. In February, however, it improved prodigiously to 5.7%. Net jobs creation in accommodation and food services in February was +114,000, or 40% of the outsized total increase in services-providing jobs.

Canada hasn’t moved quite all the way to a full economic re-opening, but such an outcome is on the horizon and a repeal of mask mandates, under most circumstances, is probably only a few weeks away in all provinces.

Canada’s total employment figure is now +1.9% above its level in February 2019, just before the coronavirus showed up as the nastiest of lodgers.

Wage gains in Canada have been speeding up, but they’re still only about half what the BLS is reporting for the U.S. For all Canadian employees, February’s year-over-year earnings increases were +3.1% hourly and +3.4% weekly.

From Table 1, non-union workers have been faring a little better on the stepped-up wage front than union workers. And full-time employees have made significantly greater weekly y/y advances than part-time workers.

Provincially, Quebec, can take pride in having the lowest SA unemployment rate in the country presently, 4.5%. Manitoba, Saskatchewan, and B.C. also have U rates that are less the 5.0%.

Ontario, though, was the province that stood out for month-to-month jobs generation in February, +194,000, or 58% of the nationwide total. (Ontario’s population share of total Canada is 39%.) 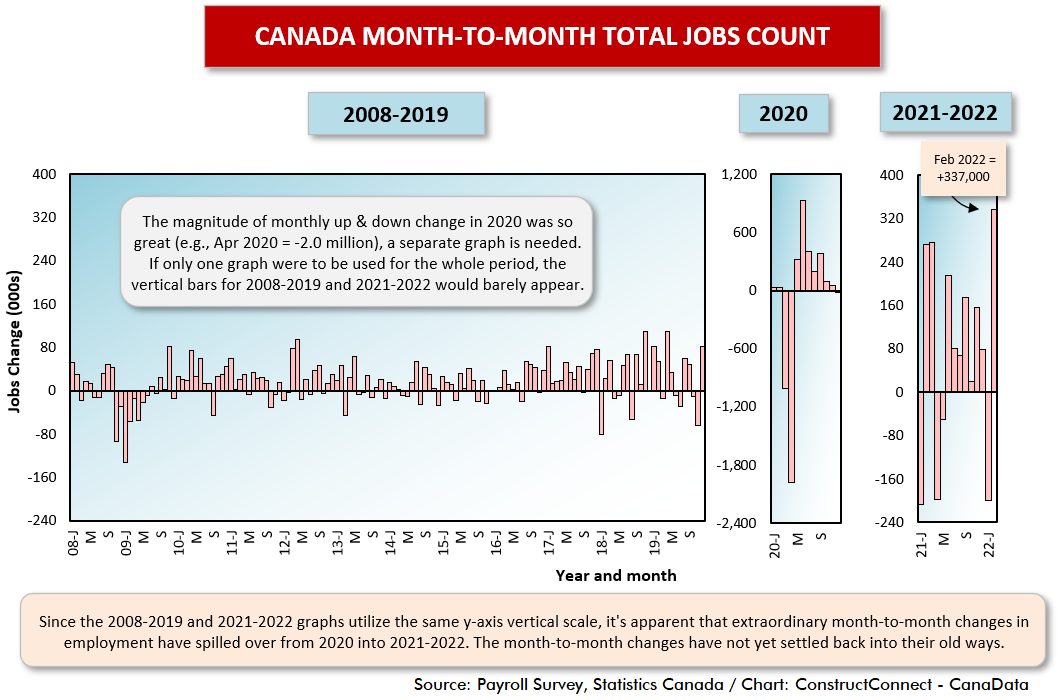 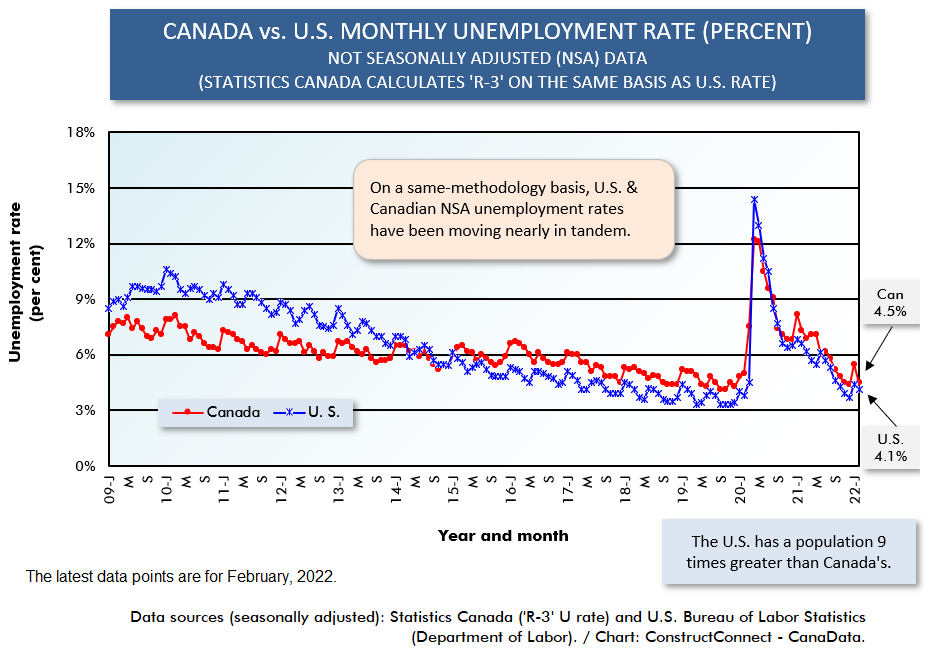 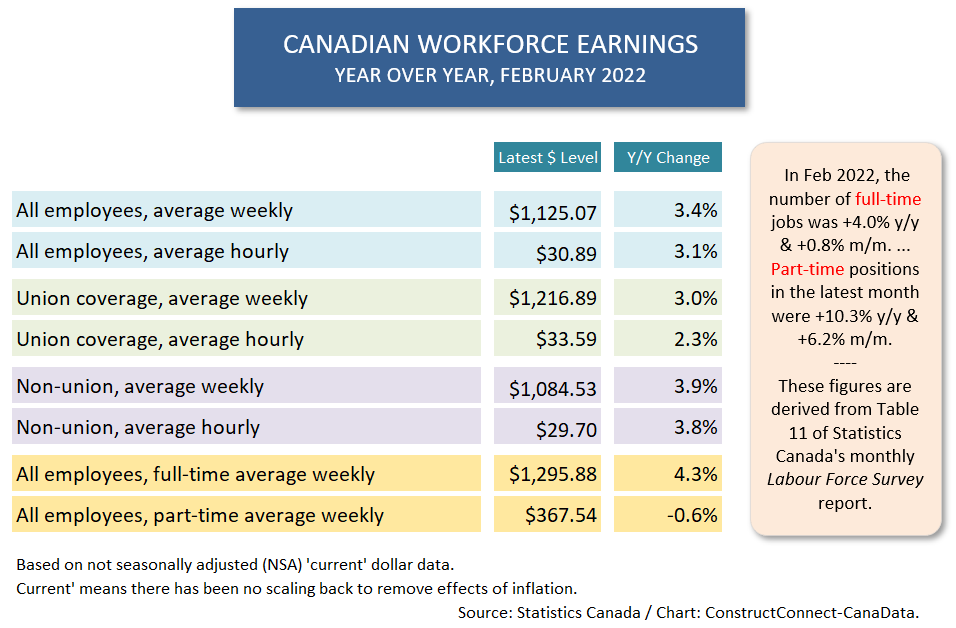 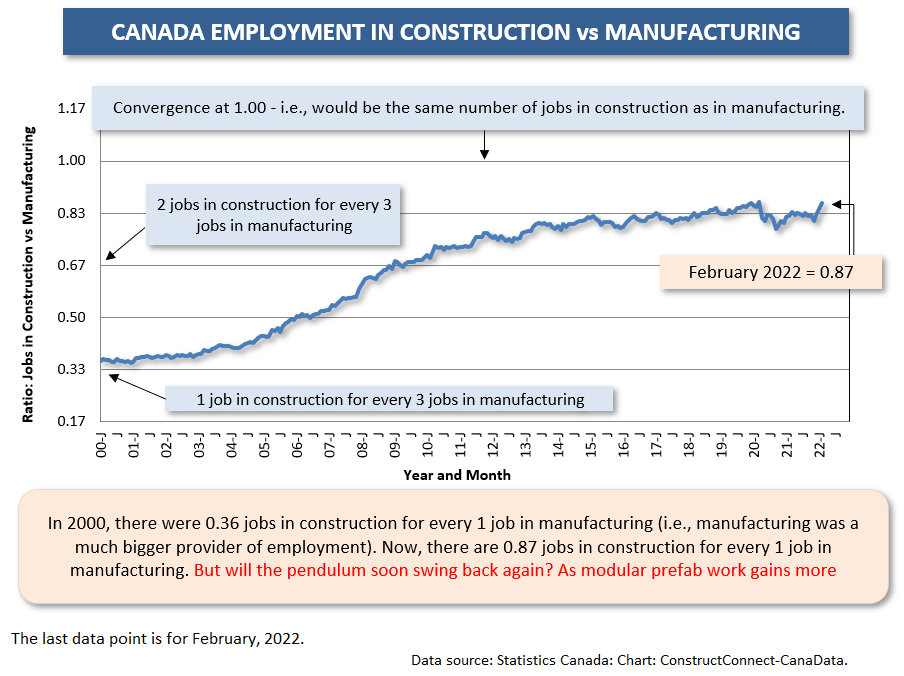