The average of seasonally adjusted and annualized (SAAR) housing starts in the U.S. through the first two months of 2022 has been 1.713 million units, +11.5% versus January-to-February of 2021. 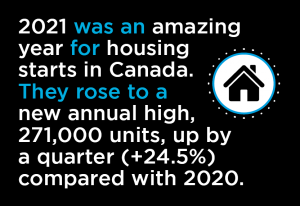 Graph 5, however, which also deals with permits, is not as bullish. Graph 5 shows the 12-month moving total of the difference between permits and starts, using ‘actual’ rather than SAAR numbers.

In Graph 5, there’s still a healthy positive gap between permits and starts, but it has been gradually decreasing.

As an interesting sidebar, the text box in Graph 2 highlights that last year’s U.S. total housing starts figure is easy to remember. It was almost exactly 1.6 million units. 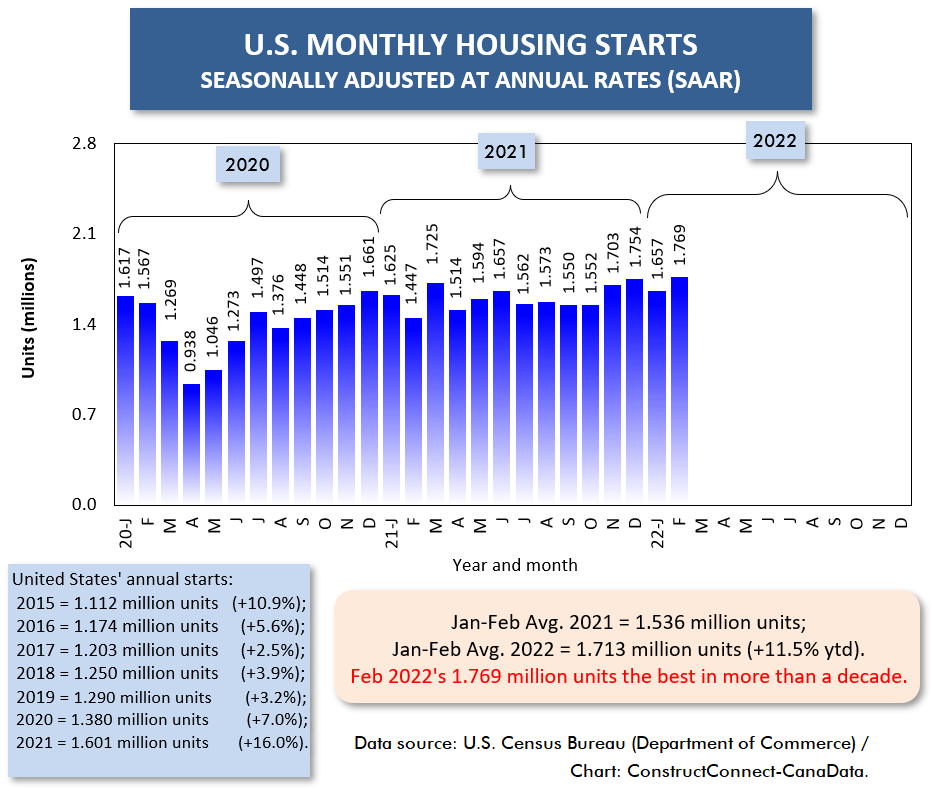 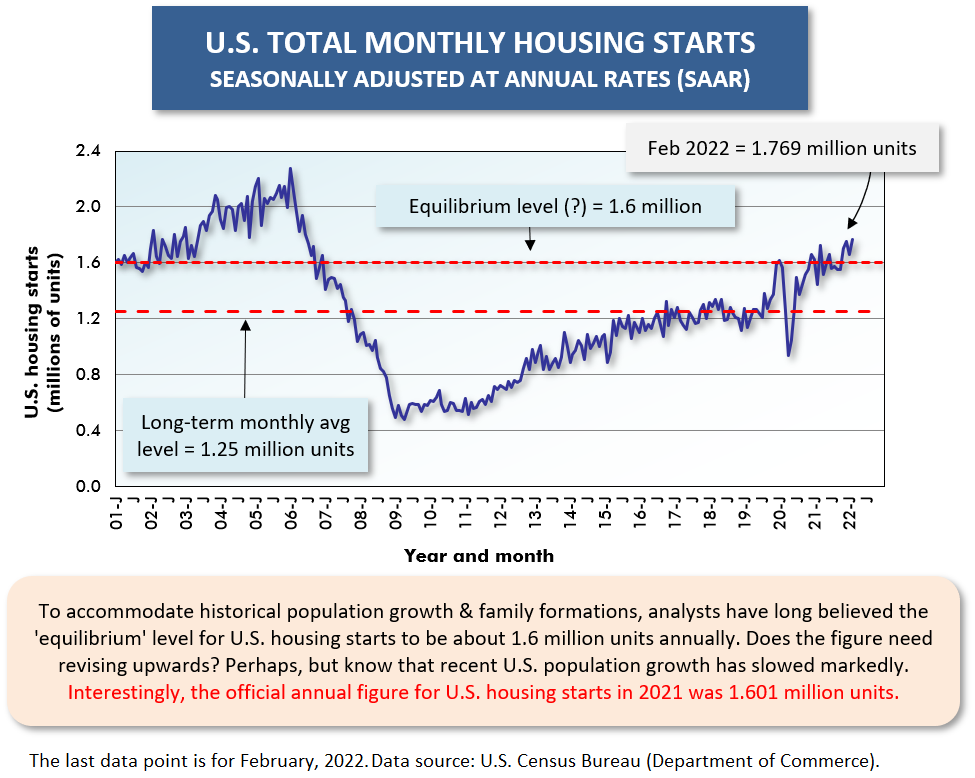 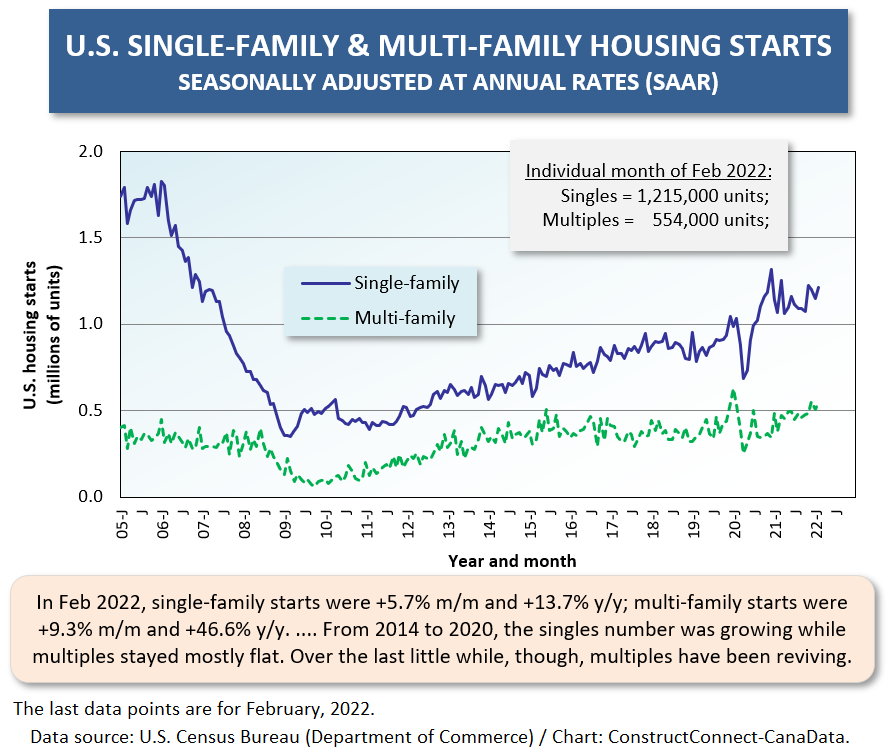 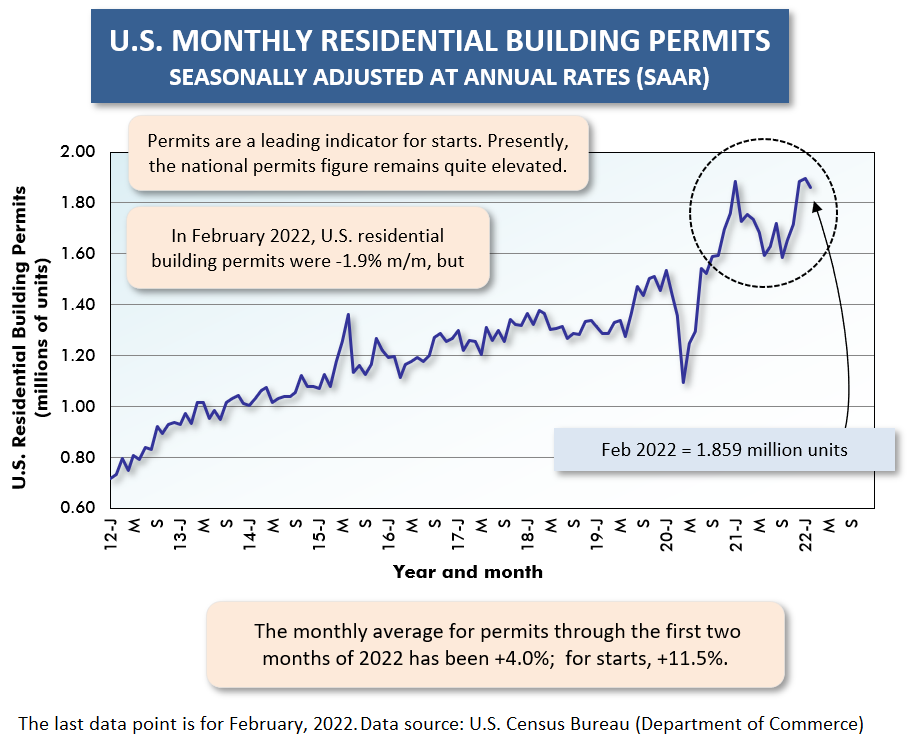 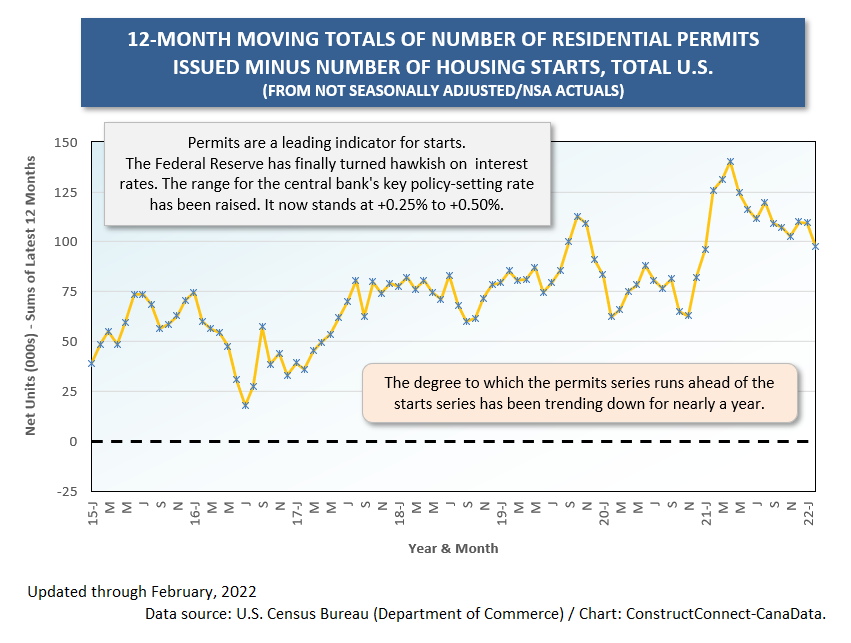 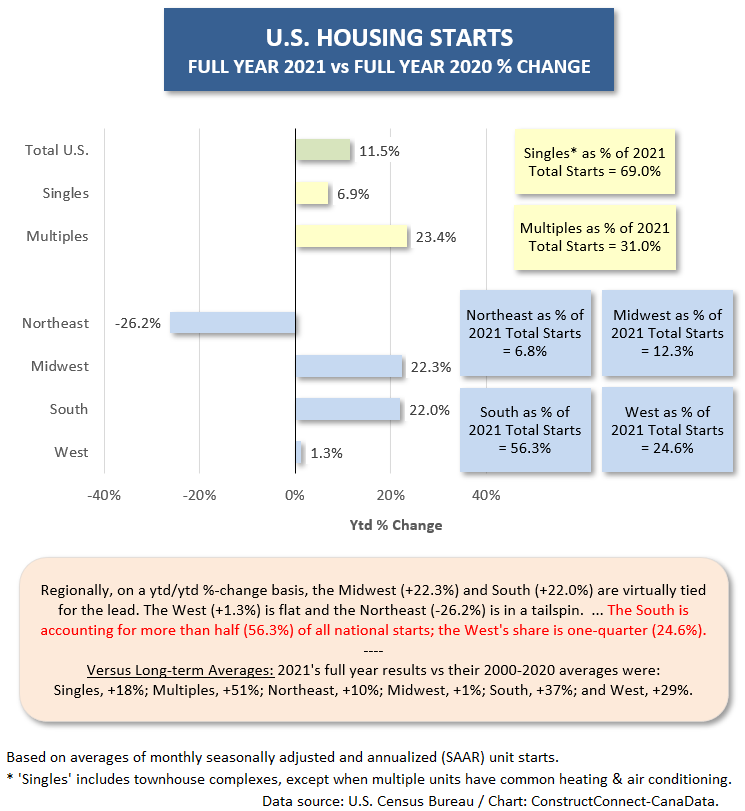 One of the key ingredients contributing to the success of Canadian housing starts continues to be strong population growth. Statistics Canada has released its 2021 census results for population counts in cities across the country. Versus 2016, the number of urban centers labeled as census metropolitan areas (CMAs) has been increased from 35 to 41.

A CMA encompasses both a downtown core and a local band of ‘bedroom’ communities. The overall population must be 100,000 or more, with at least 50,000 living ‘where the action is’, at the center.

In the years of the 00s, Alberta was the province with the fastest annual rate of population growth. Now, that title goes to British Columbia.

B.C.’s heightened status as an ‘urban’ hub is demonstrated by its pickup in number of cities with a CMA designation. As a result of the latest census findings, Nanaimo, Kamloops, and Chilliwack have been upgraded to CMA status, to go along with Vancouver, Victoria, Kelowna, and Abbotsford.

B.C. is home to 7 CMAs, which moves it into second place among the provinces. Except, Quebec has six ‘standalone’ CMAs, but also a seventh when Gatineau is included. Ottawa-Gatineau is one CMA, but it’s located in both Ontario (mainly) and Quebec (less so, but to a still significant degree).

Ontario remains the champion with 17 CMAs. The Atlantic region has 5 CMAs, Alberta 3, Saskatchewan 2, and Manitoba 1.

Some of the other CMA population highlights from the latest census results, versus five years prior (i.e., 2021 vs 2016), are set out in the following bullet points.

Among Census Agglomerations or CAs (i.e., communities the next size down from CMAs), the greatest five-year gains in population have occurred in Squamish, B.C., +21.8%; Wasaga Beach, Ontario, +20.3%; Tillsonburg, Ontario, +17.3%; Canmore, Alberta, +14.3%; and Collingwood, Ontario +13.8%. In some of those centers, the population explosions have placed demands on essential services, such as water supply, beyond what local public utilities have been able to easily provide. 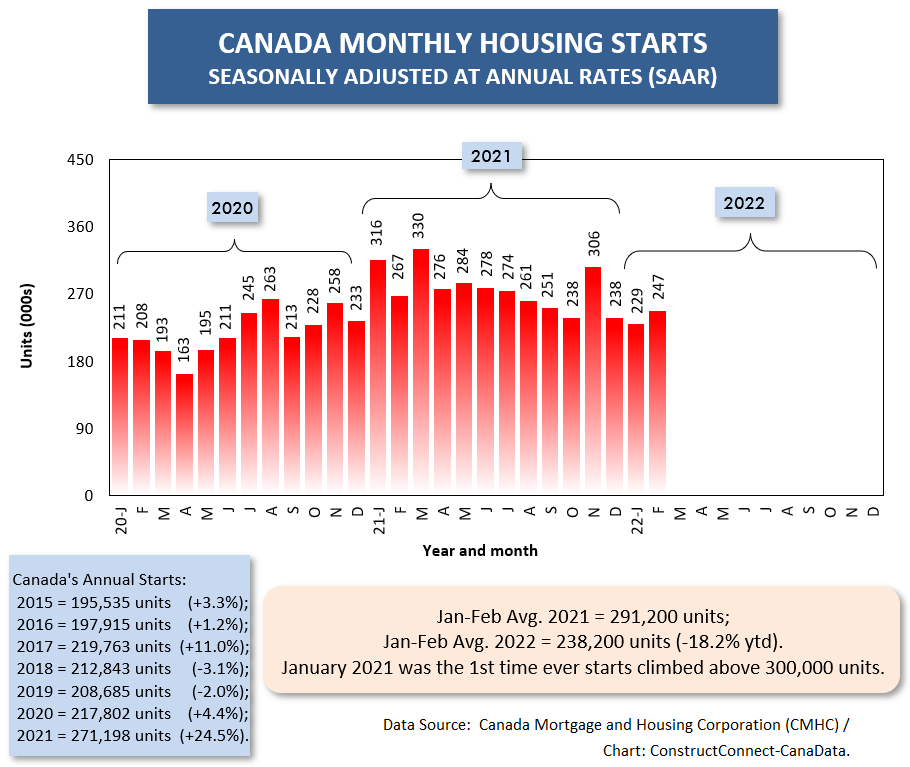 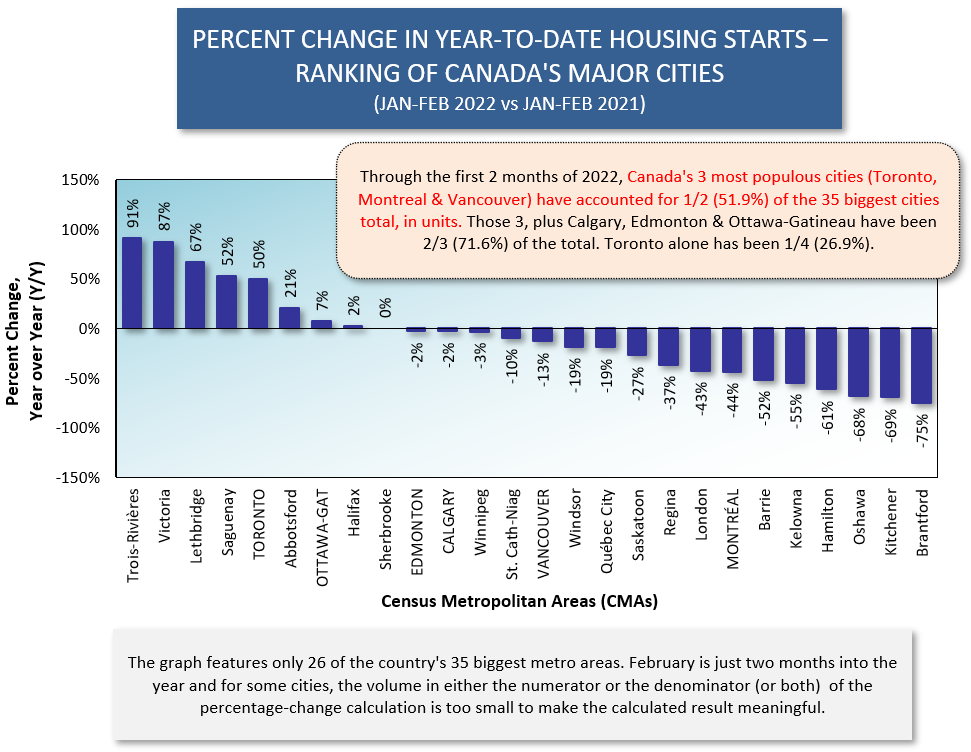 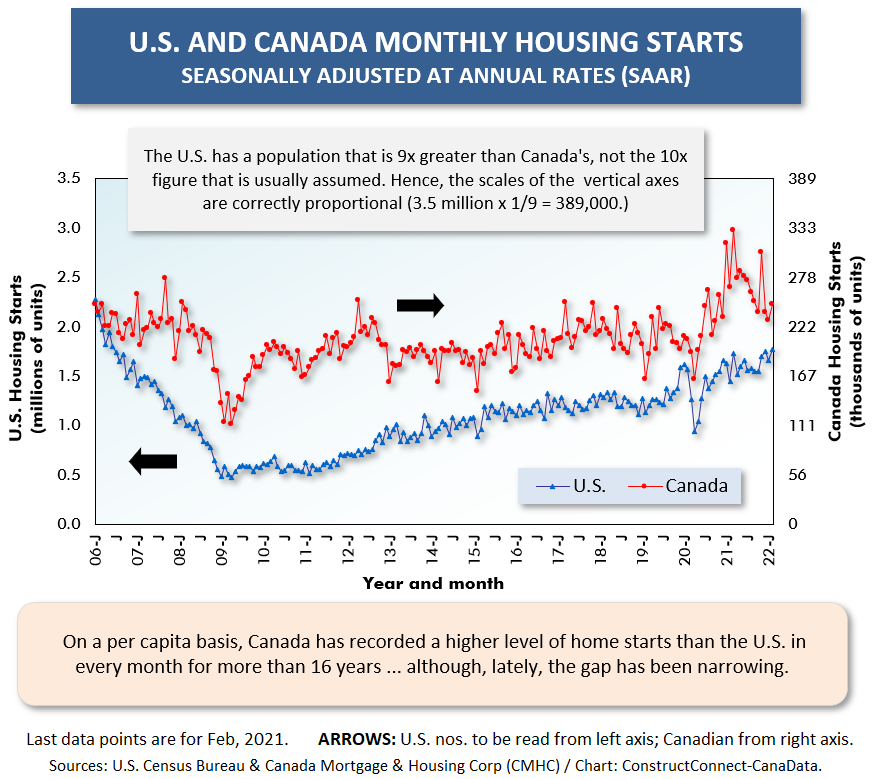