After posting the second strongest annual economic gain among the ten provinces in 2021, the Alberta economy will likely outpace the rest of the country in 2022. This prospect is fueled (pun intended) by the steady rise in world oil and natural gas prices over the past year and against the headwinds of anti-fossil-fuel policies in the United States and Canada. Over the past 12 months, Alberta’s exports of crude oil are up by +86% and exports of natural gas have risen by +165%.

The price of crude will probably remain volatile until there is a negotiated settlement between Ukraine and Russia. However, once the international situation stabilizes, global demand should strengthen, thereby reinforcing the floor under world oil prices and the value of Alberta’s energy exports.

Largely due to a surge in post-pandemic hiring, total employment in the province has increased by +67,000 jobs over the past six months, taking the unemployment rate from 8.1% to 6.8%, a 27-month low. This improved job growth and a steady decline in COVID-19 case counts have contributed to a solid gain in consumer spending in January. Manufacturing sales in the province, over the past six months, have risen by +33%, more than twice the increase posted by the country as a whole, +15%.

Going forward, the recent (March 1) entry of the province into step 2 of its COVID-19 easing measures should revive spending on services while at the same time contributing to a further increase in hiring. According to the Alberta government, the timing of the entry of the province into Step 3, the final stage of re-opening, will be dependent on hospitalization rates. After peaking at 1,561/100,000 population on February 1, the hospitalization rate is now down to 919/100,000 as of March 18.

Sustained jobs growth, the easing of COVID-19 restrictions, plus a rebound in both international and interprovincial net migration, have caused housing demand, reflected by sales of existing homes, to escalate sharply over the past six months. The rapid run-up in sales and a shrinking inventory of homes for sale caused average house prices to increase by +15.5% to a record high of $482,000 in February.

Housing starts over the past 12 months are up by +27% vs the same period a year earlier. Despite the likelihood the Bank of Canada will hike interest rates to rein in inflation, the outlook for residential construction in Alberta appears relatively bright, given that the number of residential building permits approved in the province in the last 12 months is up by +35% versus the same period a year earlier. In light of this rise in single-family and multi-family building approvals, we expect housing starts in the province to total in the range of 36,000 to 39,000 units this year and from 33,000 to 36,000 units in 2023, compared to 31,900 units in 2021.

Statistics Canada’s 2022 Capital and Repair Expenditures Survey (CARES), conducted between September 2021 and January 2022, reported that public and private sector capital expenditures (CAPEX) in Alberta rose by +11% in 2021 and estimated that it would increase by +5% this year to a total of $56.6 billion. By far, the major contributor to this gain is a +23% pickup in planned spending on mining, quarrying, and oil and gas.

Several indicators strongly suggest the spending on oil and gas extraction will be stronger in 2022 than indicated by the CAPEX survey. First, the price of oil (Western Canada Select) jumped from a low of $43 USD per barrel in late November of 2021 to a record high of $109 early in March of this year. Second, the number of active oil rigs in the province has jumped from 40 in May of last year to 174 at the end of this February.

Also, over the past six months planned spending on non-residential construction projects in the province has risen by +45% vs the same period a year earlier. Major industrial projects contributing to this increase include the Air Products Hydrogen Production and Liquefaction Facility in Strathcona County, the Alberta Xpress Pipeline Expansion Project, and the Green Line LRT in Calgary.

Risks to the strong outlook

We estimate the Alberta economy grew by +5.3% to +5.6% in 2021 and expect the combination of stronger exports, a post-pandemic rise in consumer spending, sustained growth of residential construction, and energized capital spending will drive the province slightly faster, in the range of +5.5% to +5.8%, this year.

With inflation at a 30-year high and likely to go up further in the near term, there is increased risk that the impact of an extended tightening of monetary policy will put the brakes on economic growth in Canada. However, given that the tightening of monetary policy on both sides of the border has been implemented with a significant lag, we see the shadow of a recession  being more pronounced in 2023 than in 2022. 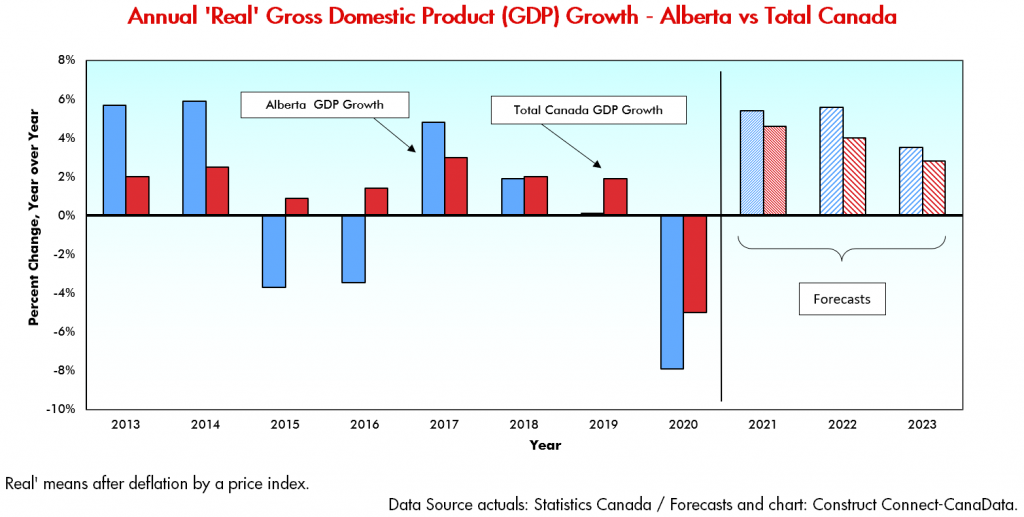 ‘He was my left hand.’ Father grieves following charges in wake of son’s death

Several years on, Marcel Poitras’ pain over his son’s death is as fresh as the d...

In the history of the City of Calgary, there are few people who can claim to hav...