Turmoil in the stock markets, an inflation rate that won’t quit and interest rates that have only just begun their journey higher failed to deter robust U.S. jobs growth in April. The Bureau of Labor Statistics (BLS), in its April Employment Situation report, asserts that total U.S. employment climbed upwards by 428,000 positions in the latest month. 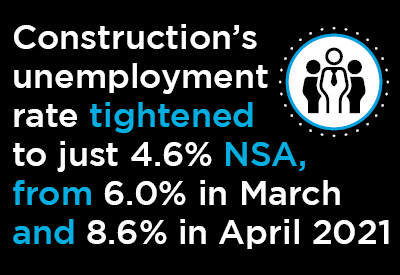 The count of unemployed individuals in America is now 5.5 million NSA or 5.9 million SA. March’s Job Openings and Labor Turnover report (aka, the JOLTS story) says there are currently 11.5 million open spots in the country. Further compression of the U rate seems likely and present labor market circumstances are providing workers with more wage and working- condition leverage.

As per usual, private services firms provided the bulk of the new jobs in April, +340,000, with the ‘leisure and hospitality’ sector on a hiring tear, +78,000 jobs. ‘Food services and drinking places’ alone (i.e., bars and restaurants) added to their staffing by +44,000.

But there were two other sectors that played unusually prominent roles in jobs creation and it’s interesting to speculate on their motivation. Much of today’s inflation problem is being caused by supply shortages. To help unlock logistical bottlenecks, the ‘transportation and warehousing’ sector has increased its payroll count by +7.8% year over year. In April, it added 52,000 jobs.

The manufacturing sector is also doing its part to alleviate inflation by taking steps to increase the supply of many goods. The number of total U.S. manufacturing jobs in April shot up by +55,000.

The construction sector’s employment performance in April was lame, only +2,000 jobs. Construction’s unemployment rate, though, tightened to just 4.6% NSA, from 6.0% in March and 8.6% in April 2021.

Solid year-over-year increases in compensation rates were again seen in the latest month. For all jobs, including bosses, the climbs were +5.5% hourly and +4.6% weekly. Construction workers, as a subset of all jobs, had little to complain about with a matching increase hourly, +5.5%, and an even better gain weekly, +4.9%.

For all jobs, but excluding, supervisory personnel, April’s y/y wage increases were +6.4% hourly and +5.5% weekly. Construction worker didn’t quite keep up, at +5.3% hourly and +4.8% weekly.

The Federal Reserve has just lifted the range for its leading interest rate indicator, the federal funds rate, by 50 basis points (where 100 basis points = 1.00%), to sit at 0.75%-1.00%. The Fed has also signaled that, over coming months, another couple of plus-50-basis-point moves are in the cards.

The hope is that a so-called ‘soft landing’, to rein in inflation while also permitting modest GDP growth, can be achieved (i.e., an economic slowdown that doesn’t deteriorate into an unpleasant recession). Frankly, given how hot the labor market is, the Fed will be hard pressed to successfully pull off its high-wire act.

The job-creation record north of the border in April was a lackluster +16,000 jobs, according to Statistics Canada’s Labour Force Survey.

Especially disappointing was the -21,000 month-to-month reduction in Canadian construction jobs. Last year’s super-charged homebuilding market won’t find an equal this year. (The Bank of Canada has raised its key policy-setting ‘overnight’ rate to 1.00%.)

Canada’s ‘headline’ SA unemployment rate has tightened a notch to 5.2% from 5.3% in March. But it’s the NSA U rate, calculated using the same methodology as in the U.S., that has become impressive, only 4.4% (although it still lies above the 3.3% figure south of the border).

Where Canada is leading the U.S. on the labor side, though, is in its jobs’ recovery versus the notorious COVID-induced slide between February and April of 2020. Canada has now restored all the jobs that disappeared in the Spring of two years ago. The U.S. has a jobs claw-back ratio of only 95%.

Canada has gone beyond its February 2020 level of employment by +2.4%.