Economy May Have Hard Landing Next Year

In our last update on the Canadian economy, published in April, we guesstimated the risk of recession in the near term (i.e., next 12 months) was the highest since the financial crisis of 2007-2008. Several forward-looking indicators now suggest that risk has materially increased. Indeed, it now appears that growth in Canada will weaken in the final quarter of this year and contract during the first half of 2023.

The global economic outlook has dimmed

Topping the list of reasons for this downgrade is a scaling back of the outlook for global growth accompanied by an increase in headline CPI that has triggered a widespread rise of inflationary expectations. Central banks in most developed countries which have, until recently, wrongly expected inflationary pressures to ease, are now tightening more aggressively. In a recent speech to the International Centre for Monetary and Banking Studies, Agustin Carstens, General Manager of the Bank of International Settlements, noted that “higher inflation has become increasingly broad-based” and rising prices for services (which tend persist even more than for goods) suggest inflation is becoming more entrenched. According to Carstens, “We may be on the cusp of a new inflationary era.”

Inflation at 40-year high in Canada

In Canada, higher prices for goods (+10.4% y/y) and services (+5.2% y/y) caused headline inflation to rise by +8.1% y/y in June, a 40-year high. As has happened in other major developed countries, inflationary expectations in Canada have ratcheted steadily higher over the past four quarters. This escalating trend is captured in the Bank of Canada’s second-quarter Business Outlook Survey and in its more recently introduced Canadian Survey of Consumer Expectations.

The Bank of Canada’s more aggressive policy stance is indicated by its recent above-consensus 100 basis point (where 100 basis points = 1.00%) increase in the target for the ‘overnight rate’. Furthermore, the BoC’s stated intention to raise rates further reinforces the view that growth in Canada will begin to contract late this year or early in 2023.

Three other factors supporting this outlook include: 1) the ongoing impacts on energy and food prices resulting from the Russian invasion of Ukraine; 2) ongoing supply constraints; and 3) heightened uncertainty about the near-term investment outlook.

The sector which provides the most advanced notice of recession is residential construction. Relatively modest increases in interest rates rapidly reduce affordability and cause housing demand to shrink. In Q2, ahead of the 100-basis-point hike in the overnight rate, sales of existing homes in Canada tumbled by -26% y/y, their largest drop since 2009.

Across the country, resale activity has declined in 21 of the 26 Associations reported on by the Canadian Real Estate Association (CREA). The most pronounced year-over-year drops have occurred in Ontario (-35.4%) and British Columbia (-35.2%).  Reflecting the slowdown in sales, the Aggregate Composite MLS Home Price Index has fallen by -6.7% over the past three months.

Given the spectre of further hikes in interest rates, there is little doubt prices will retreat more during the second half of this year. The close relationship between home sales and housing starts suggests the latter will exhibit a significant retreat later in the current quarter or early in the fourth quarter.

Outlook for non-residential investment is positive – for now

Although the -17% drop in equity prices over the past three months is signaling a weakening of investor confidence, strong growth of after-tax profits late in 2021 and early this year, plus high rates of capacity utilization, suggest non-residential investment will remain positive through the second half of 2022. According to the BoC’s latest Business Outlook Survey, “the number of firms intending to increase their investment remains high” due to strong domestic and foreign demand and the need to expand capacity and improve productivity. In addition, spending on large public sector projects should underpin non-residential spending into 2023.

The combination of rising interest rates and the erosion of real incomes due to inflation will probably exert a significant drag on consumer spending late this year and early in 2023. Also, assuming the US Federal Reserve continues to put the brakes on the U.S. economy, it will cause the market for 78% of our total exports to shrink significantly.

Heading into 2023, the combination of shrinking exports, weak consumer spending, and a retreat in residential construction will exert considerable drag on the economy. As a result, we expect that after posting growth of +3.2% this year, GDP will slow to 0.8% in 2023. 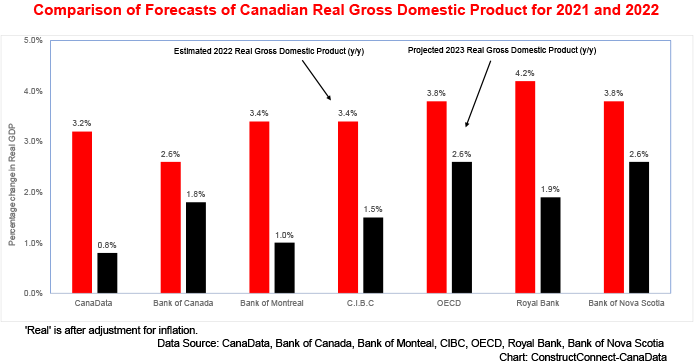