Much of the world may be taking a break as yearend approaches, but that doesn’t mean the economy is kicking back with eggnog and gingerbread cookies. Public and private sector data releases are pouring forth regardless and here are some of the nuggets to be gleaned. 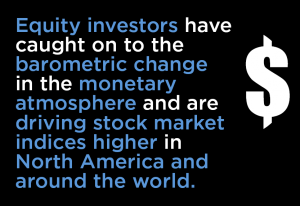 (1) One indicator with a strong record for reliability concerning the health of the U.S. labor market is the weekly initial jobless claims figure released by the Bureau of Labor Statistics (BLS). A number above 300,000 generally correlates with high unemployment and recession. As the figure descends below 300,000, however, the labor market is tightening. Down around 200,000, the unemployment rate will be about as low as it ever manages to go. That’s where we are now and where we have been for quite a while. At times, during the last several months, the initial jobless claims number has threatened to move significantly higher. For example, it rose to 261,000 in mid-July of this year. But for the latest reported week, the one ending December 10th, it was notably down again, at only 211,000.

(2) The U.S. not-seasonally-adjusted (NSA) unemployment rate is just 3.4%. The Canadian comparable figure is similarly minimal, 3.8%. This is despite the federal funds rate of the Federal Reserve having been lifted into a range of 4.00% to 4.25% and the overnight rate managed by the Bank of Canada moving up to 4.25%. Both central banks have made no secret of the fact they want to slow their home economies to rein in price inflation. The braking actions have dimmed business and consumer confidence, but they have not, as yet, knocked the stuffing out of either economy.

(3) Inflation is easing in both countries, so maybe now would be a good time to pause with the rate hikes. The Chairman of the Fed and the Governor of the Bank of Canada are reflecting on the degree to which further upwards interest rate moves are warranted. Fed Chairman, Jerome Powell, however, is still speaking of the possibility that the federal funds rate will be shifted beyond consensus forecasts made by ‘the street’ (i.e., stock market commentators). Nevertheless, there isn’t quite the same gung-ho talk of huge rate hikes still to come and hang the consequences. Equity investors have caught on to the barometric change in the monetary atmosphere and are driving stock market indices higher in North America and around the world.

(4) The U.S. All-Items Consumer Price Index (CPI-U, where the ‘U’ stands for urban consumers) was +7.1% year over year in November. The +7.1% marked the fifth straight month of decline after CPI-U reached a multi-year peak of +9.1% in June at the beginning of summer. The price of gasoline in the U.S. is currently +10.1% y/y. As recently as in June of this year, it had been +59.9% y/y. Food at home remains pricey, on a y/y basis, with bakery and dairy products leading the advance. But the outsized price increases of new and used vehicles have now moderated. The ‘new vehicles’ sub-index in the CPI data set has downshifted to +7.2% y/y. The ‘used cars and trucks’ sub-index has slipped into decline, -3.3% y/y.

(5) Wage increases in both the U.S. and Canada are setting a torrid pace; but all is not as it seems. For workers to achieve an increase in purchasing power, which is crucial for consumer spending to goose real GDP, earnings gains must be above how prices are performing. That’s not currently the case. In the U.S., November’s all-jobs hourly wage uptick y/y was +5.8%, falling short of inflation’s +7.1%. In Canada, the latest comparison of the hourly earnings advance to the CPI pitted +5.6% against +6.1%, again pointing to diminishment in purchasing power.

(6) There’s an aspect to the Fed’s pursuit of a more elevated yield environment that is rarely given much attention. It may well cause a problem that will eventually move into the spotlight. Higher interest rates in the U.S. attract foreign capital, jacking up the value of the greenback. In turn, a more expensive U.S. dollar vis-à-vis other currencies makes the price of U.S. exports more prohibitive while improving the appeal, from a cost standpoint, of imports. The net result will be a deterioration in the foreign trade balance. And that’s exactly what’s happening.

(7) Despite receiving a boost in demand for energy products from a gas-thirsty Europe, the total dollar volume of U.S. goods exports has dropped by more than -4% over the past two months. At the same time, the total dollar volume of imports has risen by +2%. Nor, in the latter case, has China been the culprit. Imports from the European Union have been at their loftiest level ever. The net result has been to move America’s goods trade deficit to -$1.2 trillion. In the 00s, considerable alarm was raised when the goods trade shortfall merely approached -$1.0 trillion. Now, breaching that threshold on a monthly annualized basis hardly raises any eyebrows.

(8) A lot of countries are being impacted negatively by the Fed’s aggressive rate moves and the U.S. dollar’s climb. Egypt has seen the value of its pound recede by a third since the Spring. Its inflation rate is approaching +20% y/y, exacerbated by a wheat import shortage as an offshoot of the fighting in Ukraine. The country has sought financial help from the International Monetary Fund (IMF). Japan, as an alternative example, is quite the outlier with respect to the interest rate-inflation fandango. Japanese interest rates remain near zero, but inflation is only +4% y/y.

(9) Japan is trying a number of innovative measures to secure energy, including production of ‘red’ hydrogen (as opposed to the better-known ‘blue’ and ‘green’ varieties) adjacent to nuclear power development. Meanwhile, Germany is moving lickety-split to wean itself from Russian natural gas. It has just completed construction of a new LNG importing terminal along a greatly truncated timeline. Siemens is working on a large ‘green’ hydrogen production plant in Berlin, that will employ electrolysis. It may eventually be the case that Germany, struggling now, is in the process of acquiring a singular competitive advantage among industrialized nations by being forced to reduce reliance on fossil fuels in favor of renewables quicker than ever imagined.