Some of the factors that have been driving rapid price inflation are relenting. The higher interest rates have pricked the balloon of excess consumer demand. Commodity price changes that were once hot have now cooled. Many of the blockages in supply chains have been relieved through workarounds and by hiring more freight haulers and other logistical staff. 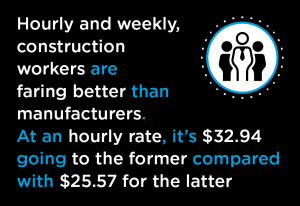 But what about wage hikes? Where do they fit in the picture and how have they been performing? To summarize, they’ve become revved up and, so far, there’s little sign of them abating.

Graph 1 shows the close connection that has historically existed between hourly wages in the U.S. economy and the ‘core’ Consumer Price Index, both year over year. (‘Core’ CPI-U for all urban consumers omits highly volatile and, therefore, distorting price movements occurring among food and energy items.)

In 2020, hourly wages blew up relative to the core inflation rate. Lower-paid workers with traditionally fewer prospects for earnings gains were thrown out of work to an extraordinary degree. At the same time, many of the essential workers who remained at their jobs received incentive and danger pay.

Since 2020, the curves for y/y hourly wages and the y/y core inflation rate have moved back into fairly close alignment. Where they are now, though, is a significant step up from where they were only a few years ago. There will be more on that subject in a moment.

In November just passed, a core inflation rate of +6.3% stood beside an ‘all jobs’ wage hike of +5.1%. The former figure situated above the latter means that the purchasing power of workers is suffering. Incomes are up in dollar terms, but so are the prices of consumer goods and the number of physical units (think loaves of bread, for example) that can be acquired has diminished.

As input data, Graph 1 uses wages for both production and supervisory personnel. Tables 1 and 2 and Graphs 3 and 4 use data for production workers alone, leaving out supervisors or bosses.

From Table 1, the total private ‘all jobs’ (i.e., across industrial sectors) hourly earnings hike in November of this year was +5.8% y/y. Construction workers earned +6.1% y/y hourly.

Also from Graph 2, the +6.1% increase hourly for construction workers in November was nearly three times the +2.3% average annual gain from 2010 through 2019.

The latest earnings increases are sprinting ahead in rare fashion. They’re responding to the critical labor shortage that is revealed in Graph 4. The unemployment rates for both ‘all jobs’ and construction (3.4% and 3.9% not seasonally adjusted/NSA) are about as low as they’re ever likely to be.

From Table 2, construction ($1,287.95) in November held a fourth-place ranking among the 12 sectors for dollar level of weekly earnings. On a y/y basis, with respect to weekly earnings, however, construction (+4.5%) was way back in tenth spot. Apparently other sectors, post-pandemic, had more catching up to do.

Compared with workers in the leisure and hospitality sector, construction personnel are earning nearly twice as much hourly ($32.94 to $18.21) and almost three times as much weekly ($1,287.95 to $446.15). The bigger discrepancy weekly is because there’s so much part-time work with hotels and motels and in bars and restaurants. In November, the weekly number of hours for construction employees was 39.1; for leisure and hospitality staff, 24.5.

Nor has Canada been left out of the ratcheting up in wage rates. Table 3, based on data appearing in Statistics Canada’s November Labour Force Survey, shows all employees across the country earning +5.6% hourly and +6.2% weekly, both year over year.

It may be the case, however, that Canadian workers are retaining purchasing power a little better than their American cousins. The Bank of Canada, when it studies inflation and wants to delve into ‘core’, turns to three sub-indices termed ‘common’, ‘median’ and ‘trim’. The average for those three indices measuring ‘core’ consumer price changes is presently +5.4% y/y. According to Table 3, Canadian wages are rising near that rate or faster. 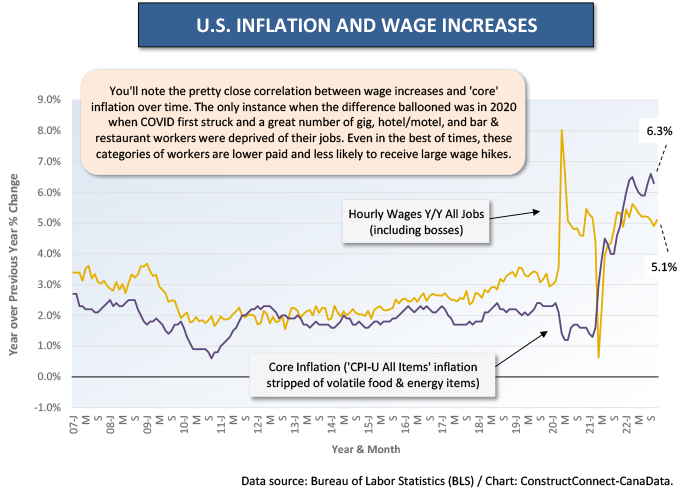 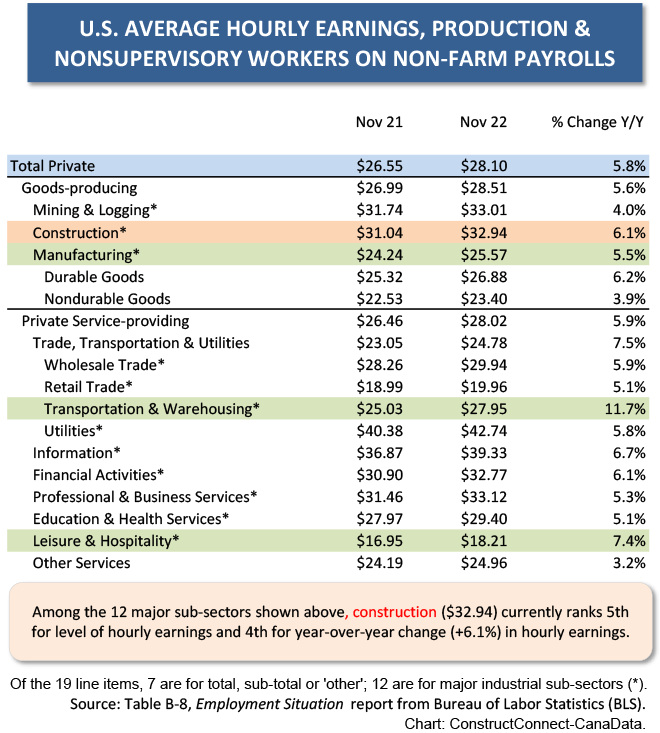 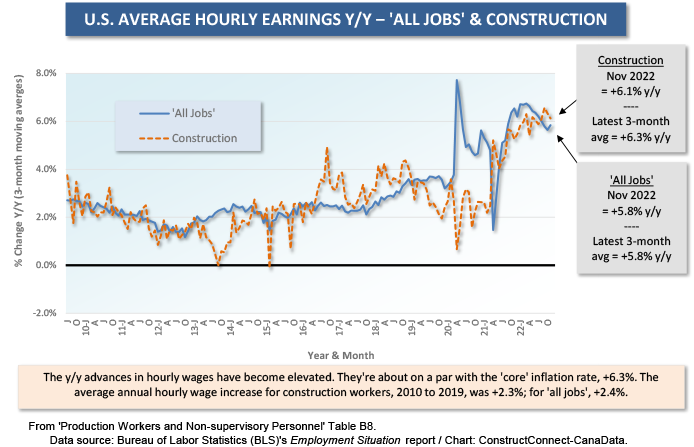 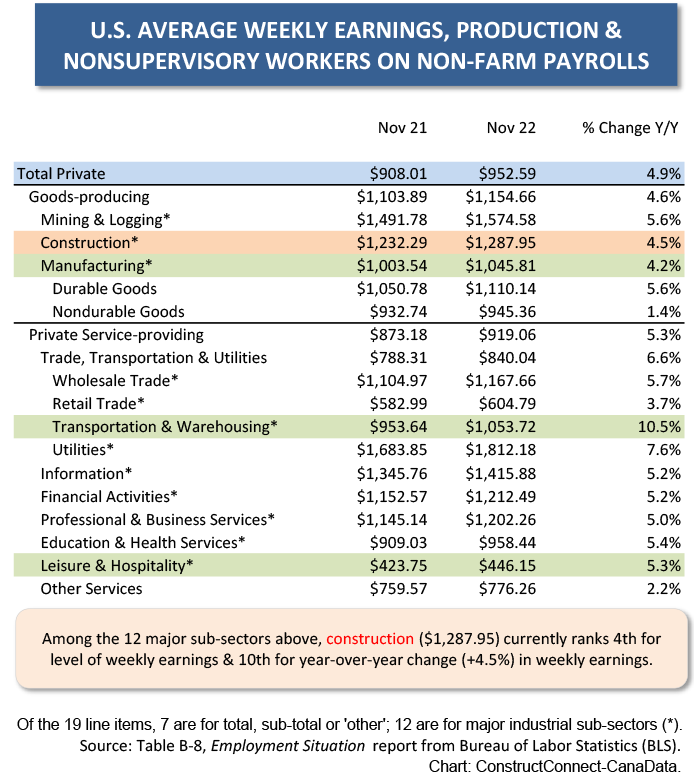 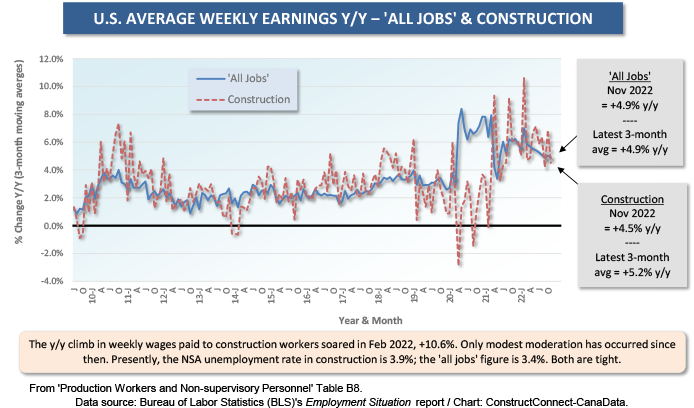 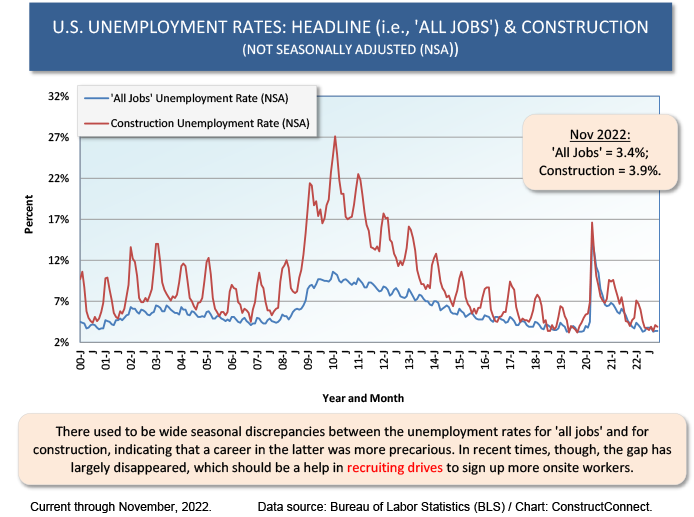 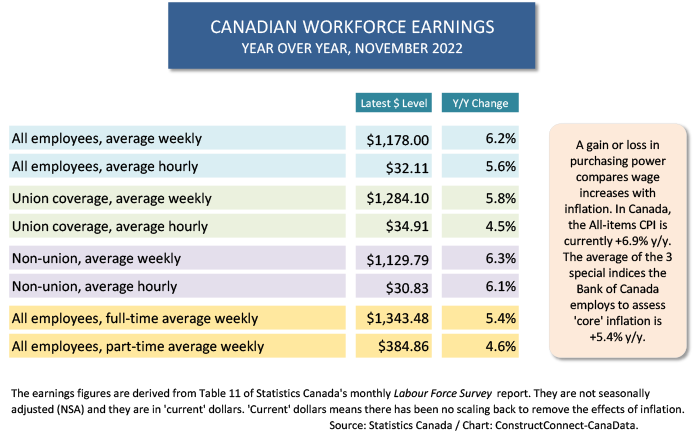