US construction starts contracted 18.3% in 2020, the largest percentage decline since the series began in 2005. This took new starts to $678 billion, their lowest level since 2015. Non-residential building starts saw the largest contraction, down 31.9%, with especially big declines in the industrial and commercial segments. Civil engineering construction fell 19.1%, driven by big declines in energy-related sectors. Residential construction fell by a more modest 2.1%, as growth in single-family homebuilding was more than offset by a pullback in new construction of apartments and condos. 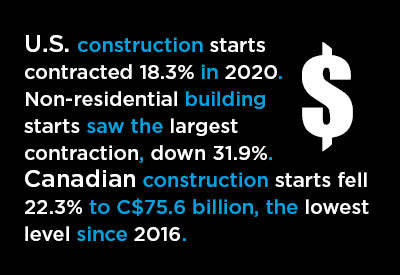 US year in review

The coronavirus pandemic weighed heavily on the US economy throughout 2020. The worst of the crisis was seen in Q2 when stay-at-home orders were at their most restrictive. GDP declined at a 31.4% annualized rate from the previous quarter in Q2, following a 5% annualized decline in Q1. The gradual lifting of restrictions during the summer, combined with a large stimulus package and accommodative monetary policy, led to a strong growth rebound in Q3, to 33.4% annualized. But the virus’ resurgence and uncertainty around fiscal stimulus led to slower growth at the end of the year, with GDP rising at a 4% annualized pace in Q4. Weak momentum going into 2021 will likely see a further deterioration in Q1, but the vaccine rollout and a large expected fiscal stimulus should see the economy start to return to normal by the summer.

The pandemic also had a harsh impact on employment – a record 21 million jobs were lost in April, and the unemployment rate shot up to 14.8%, from 3.6% at the end of 2019. The economy has since clawed back some of those job losses – 56% of the jobs lost during March and April had been gained back by the end of the year and the unemployment rate in December stood at 6.7%. However, the distribution of job losses has been far from even across industries, with high contact jobs in leisure and hospitality being especially hard hit and white-collar jobs being relatively sheltered. Record levels of government spending and an accommodative monetary policy stance helped support consumers and businesses, but overall, GDP fell 3.5% in 2020, the worst performance since the end of the second World War.

New construction starts fell by 18.3% in 2020, the largest annual decline since the series began in 2005. Stay-at-home orders during the first wave of the pandemic included the closure of construction sites in some cities and states, most notably Pennsylvania and Massachusetts, but projects have mostly been able to operate since then. The impact on the demand side of the economy may have played a bigger role, with economic uncertainty leading to cuts to capital expenditure and tight state and local budgets weighing on engineering construction. This has had an especially large impact on mega projects valued at over $1 billion. 2019 was an exceptional year for such projects, with construction starting on 35 mega projects worth a total of $79.1 billion. By contrast, there were only a dozen mega projects in 2020, totalling $21 billion. The collapse in mega projects certainly played a role in 2020’s weakness, but weak underlying construction activity took the whole-year value of construction starts in 2020 to its lowest level since 2015.

New non-residential building posted the biggest annual decline, down 31.9%. The only sectors to grow during the year were warehouses, courthouses, police & fire, prisons, and military. Warehouse construction was boosted by in investment in logistics capabilities as customers moved en masse towards online shopping – its share of total non-residential building jumped from 6.6% in 2019 to 9.8% in 2020. Military activity was boosted by a $1.75 billion intelligence base started in St Louis in Q2. The other three segments to post growth are all small (less than 4% of non-residential building combined). By contrast, there were steep declines in industrial building and in several commercial sectors. New factory construction fell 68% in 2020, the result both of large projects in 2019 dropping out of the annual calculation and weak underlying investment trends.

The steepest declines in the commercial sector were in hotels & motels, sports & convention centers, and transportation terminals, all linked to the travel and entertainment sectors that have been hit so badly by the pandemic. Private office building also declined sharply, down 36.9%, unsurprising given moves towards remote working. New data center construction is classified in this category, somewhat mitigating the magnitude of the decline. For example, construction on multiple data centers for both Google and Facebook started in 2020.
New engineering starts declined 19.1% with contractions posted in all subsectors. The largest declines were in the power and miscellaneous civil sectors, which fell by 76% and 53% respectively. Both of these sectors include energy projects, a sector hit by weak demand and low (even negative) oil prices earlier in the year, and both sectors also saw large projects in 2019 drop out of the annual calculation. Road construction, the largest engineering sector, was more stable, falling 2.8% in 2020.  Water & sewage treatment plants and dams, canals, & marine projects also proved more stable in 2020, posting single-digit declines.

New residential construction activity was more robust in 2020, shrinking just 2.1%. New single-family construction was especially resilient, growing 10.6% on the year. Although the sector was adversely impacted at the start of the crisis, by Q4, it was up 28.5% year-on-year. The shift to home working has boosted demand for more space and away from city living, favoring single-family construction. By contrast, multifamily homebuilding declined 27.6% as the pandemic has weakened demand for urban living.

Total construction starts also posted a large decline in the South, down 20.9%. However, unlike in the Northeast, the South saw a number of large projects in 2019 drop out of the annual calculation; construction had grown by 15.7% in the previous year. Regional GDP declined (by 3.3%), but demographics were quite favorable, with the population rising 0.8% from the previous year. Although the contractions were less severe, construction in the Midwest and the West still fell at a double-digit pace of 10.4% and 13.9% respectively.

The economy shed an unprecedented 3 million jobs during the peak of the crisis in March and April. Although more than 2.3 million jobs have been created since May, the year ended on a sour note as 53,000 jobs were lost in December. The deteriorating health situation towards the end of the year has also seen new restrictions enacted in a number of provinces, so economic momentum is weak going into 2021 – though the rollout of vaccines may improve the situation by the summer.

Canadian construction starts fell 22.3% in 2020, following on from a 12.3% decline in the previous year. New Canadian construction is now at its lowest level since 2016. Although there were restrictions on construction activity in Q2 in Quebec and Ontario, large projects earlier in the year limited the extent of the annual decline. More worryingly, the decline in Canadian starts accelerated through the course of the year, reaching a 43.4% year-on-year contraction in Q4.

New residential construction experienced the biggest drop (-28%), and like in the US, this was the result of a steep decline in the multi-family segment. The pandemic has shifted demand away from cities, where construction of apartments and condos dominates. The increasing prevalence of remote working has meant that workers now place a higher premium on more space, potentially a permanent shift if more flexible working conditions remain in place after the pandemic. As a result, new multi-family homebuilding declined 51.9% in 2020, while single-family construction increased by 7.8%. The single-family housing sector was further supported by record-low interest rates, mortgage deferral programs, and the fact that higher-wage workers were largely spared the worst of the crisis.

Non-residential building declined 23.1% in 2020, which followed a 36.2% contraction in the previous year. All subsectors posted annual declines except for transportation terminals and warehouses. The former grew 252% and was driven by a large project in Ottawa in Q2. The latter increased 19.6%, underpinned by investments in logistic facilities to accommodate moves to online shopping. Apart from warehousing, all other sectors in the commercial space decreased by more than 50%. This includes sectors associated with office working, city living, travel, and entertainment, such as office building, parking garages, retail, hotels & motels, and amusement.

Institutional starts, which include projects related to health, education, and public safety, were somewhat more resilient, although construction still declined at a double-digit pace in most categories. The strong rise in transportation starts kept overall growth in institutional projects positive. New industrial construction decreased 30% following a more than 80% decline in 2019. Factory construction is particularly volatile from year-to-year, and annual growth is often driven by the presence or absence of mega projects.

New engineering construction declined 17% in 2020, the smallest fall among the headline sectors. With the exception of new bridge construction, all subsectors fell.  Bridge construction grew 55.9%, boosted by a project in Surrey, British Columbia in Q1. Like in the US, road construction was somewhat more stable, declining by just 1.9% on the year. The steepest decline was in the miscellaneous civil sector, down 30.8%, which had a number of large pipeline projects started in 2019 drop out of the annual calculation, most notably the $7.4 billion Trans Mountain Pipeline Expansion project.

This report was written by Abby Samp of Oxford Economics.