(1) The latest inflation figure for the U.S., from the Bureau of Labor Statistics (BLS), is +7.9%, a several-decades high. It’s the year-over-year percentage change in February’s all-items Consumer Price Index (CPI), for all urban consumers. The ‘core’ rate of inflation, which excludes price-volatile food and energy items, is +6.4% y/y. The fact everyone is being ensnared in the strong price advances is captured by the performance of the CPI sub-category ‘food at home’, which has ballooned to +8.6% y/y. 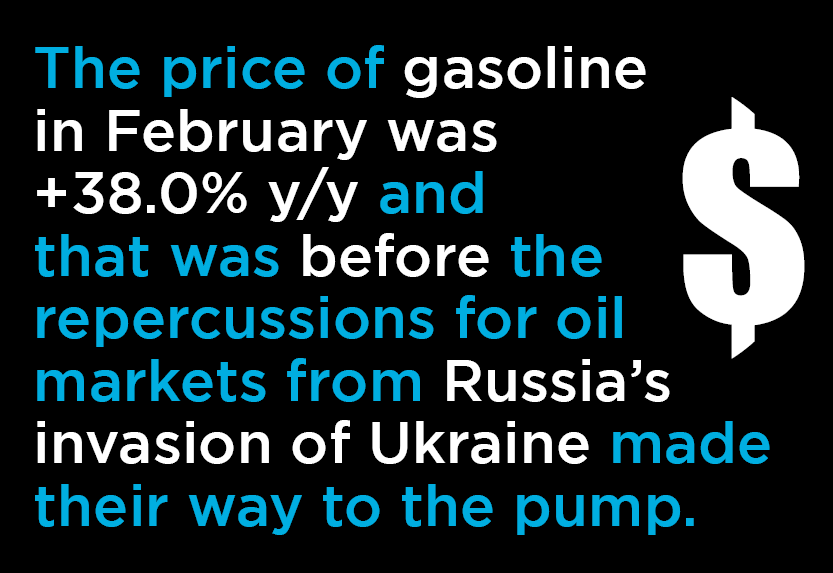 (2) The price of gasoline in February was +38.0% y/y and that was before the repercussions for oil markets from Russia’s invasion of Ukraine made their way to the pump. In early March, West Texas Intermediate (WTI) crude crossed above $100 USD per barrel for the first time in eight years, dating back to 2014. Petrol’s price per gallon has risen above $4.50 in some states and it seems unlikely that will prove to be the ceiling.

(3) Some relaxation in the headline inflation rate will eventually come from resolution of the notorious supply chain bottlenecks that have tied up cargo shipments at ports and along transportation routes. Also, there will be an easing in general price inflation, as a corollary of slower economic growth, resulting from the increases in interest rates being implemented by central banks. The Federal Reserve has just upped the target range for its federal funds rate to between 0.25% and 0.50%. The Bank of Canada has lifted its overnight rate to 0.50%.

(4) But short of a jarring recession, it’s hard to see where some of the key underlying pressures on everyday prices will be dissipating anytime soon.

(5) Here’s something else to consider. A post-pandemic recovery in the travel industry appeared underway. Now there are concerns about the likelihood of a big jump in the price of jet fuel.

(6) I’ve made the case before, though, that it’s often worthwhile to look at apparently ‘bad’ things from the flip side, thus gaining a different and more positive perspective. For example, the big advances in steel prices that are currently underway, through their revenue opportunities, must surely be factoring into the recent announcements of two major mill expansions. Nucor will be spending $2.7 billion on a new steelmaking facility on the Ohio River in West Virginia. And U.S. Steel is breaking ground on a $3 billion plant at an existing site in Osceola, Arkansas. U.S. Steel’s combined operation will be known as the Big River Steel Works. Both companies, in their new operations, will be employing electric arc furnace (EAF) technology.

(7) U.S. initial jobless claims, a key indicator of the health of America’s labor market, dropped below 200,000, to reach 188,000 in the week ending December 4th of last year. Then the Omicron variant of the coronavirus foiled economic re-opening efforts and the initial jobless claims number shot back up, climbing to 290,000 in the middle of January. Since then, though, first-time unemployment insurance claims have been receding again. For the latest week, the one ending March 12th, the number was a mere 214,000. No wonder the unemployment rate is so low, 3.8% seasonally adjusted. Now if only the newest variant of COVID, BA.2, can be warded off quickly.

(8) The Census Bureau’s estimates of ‘advance’ retail sales in the U.S. in February, on a year-over-year basis, were impressively upbeat. Contributing to the y/y ‘total’ increase of +15.9% were sales by: gasoline stations, +36.4%; clothing and clothing accessories stores, +30.6%; ‘miscellaneous’ stores (i.e., featuring Internet platforms and e-auctions), +25.4%; department stores, +22.8%; motor vehicle and parts dealers, +17.2%; and building and garden equipment and supplies stores, +14.8%. Not actually part of ‘retail’, but an important portion of consumer spending nonetheless, ‘food services and drinking place’ sales (i.e., in bars and restaurants), were +33.0% y/y (or ahead by one-third).

(9) There are two interesting aspects to the above-noted retail sales. First, in many instances, the outsized y/y percentage gains are due to low previous-year base numbers; and/or they result from large recent price spikes. On that note, it’s surprising ‘grocery store’ sales are only +8.4% y/y. Second, there’s always the question of how well ‘bricks and mortar’ shopkeepers are doing, since they’re the ones who will determine future retail construction activity (e.g., shopping centers). Although, it must quickly be added that Internet sellers, lately, have been driving a great deal of low-rise building work of the warehouse, fulfilment, and distribution variety.

(10) Canada Mortgage and Housing Corporation (CMHC) is reporting that residential groundbreakings north of the border last year reached an all-time annual high of 271,000 units, ahead by one-quarter (+24.5%) versus 2020’s level of 218,000 units. In three separate months of 2021, seasonally adjusted housing starts exceeded the 300,000-unit benchmark which had never previously been breached. A slightly less torrid, but nonetheless impressive pace has been maintained in the first two months of 2022: 229,000 units in January and 247,000 units in February.

(11) Among Canada’s six most populous cities, year-to-date housing starts are +50% in Toronto (where starts were tepid in the early going last year); +7% in Ottawa-Gatineau; -2% in each of Calgary and Edmonton; -13% in Vancouver; and -44% in Montreal (which got off to a fine beginning in 2021). By level, Toronto (6,758 units to date) is way out front, beating second-place Montreal by more than double.

(12) Stay on the lookout for other ‘oddball’ news. From two manufacturing facilities, Ukraine is said to be the source of about half the world’s requirement for neon. Those two plants are presently offline. Neon gas is used in the lasers employed for eye surgery and in the lasers that cut and shape semi-conductors. Therefore, solving the computer chip shortage that is bedeviling automakers and other manufacturers isn’t just a matter of setting up more production lines. There are other holdups as well.