Risk of Recession is Highest since 2007

Three recent developments are overshadowing the near-term outlook for the global economy and for Canada in particular. For the global economy, uncertainty about the impact of the attack on Ukraine by Russia has eclipsed uncertainty related to Covid-19, the effects of which appear to be waning in most countries, except China. This view is highlighted in a recent OECD report titled The Economic and Social Impacts and Policy Implications of the War in Ukraine which notes that, although Russia and Ukraine together account for less than 3.3% of global GDP, they are major producers of several key commodities. In 2020, 11% of world oil exports and 20% of global fertilizer exports came from Russia. It is also the world’s largest exporter of wheat.

Although Ukraine accounts for a mere 0.15% of global output, it exports approximately 18% of the world’s wheat. It is also the fifth largest exporter of iron ore and the 13th largest exporter of steel. Restrictions on Russian exports, particularly oil and wheat, and the harm done to Ukraine’s export shipments, will exert a drag on global growth that will intensify over time.

Hope is fading for a soft landing in the US

Against this background of heightened global uncertainty, several key economic indicators suggest the U.S. economy is heading into the second half of the year at full speed. First, at 3.6%, the U.S. unemployment rate is just 0.2% above the low of 3.4% it reached in 1968. Reflecting the extremely tight labor market, initial jobless claims hit a 52-year low of 184,000 in the first week of April. Furthermore, despite a 160 basis point year-to-date increase in mortgage rates, demand for single-family homes remains strong, with median existing single-family house prices up by +15% y/y in February.

While the near-term outlook appears robust, the longer-term view is less rosy. Unsettled by a sharp acceleration in headline inflation (to a 40-year high) and the specter of higher interest rates, consumer confidence in the economy’s longer-term prospects, as measured by the Conference Board and the University of Michigan, has trended steadily lower over the past 12 months.

Recent comments by Federal Reserve Chairman Jerome Powel indicate the Fed hopes to raise interest rates so the “economy achieves a soft landing, with inflation coming down and unemployment holding steady”.  Although the Fed has managed to achieve soft landings in the past, the labor market is much tighter than on previous occasions and the gap between inflation, at +7.9% y/y in February, and the Fed’s +2% y/y target is much greater.

With the economy operating above its long-term potential and with both monetary and fiscal policy extremely stimulative, efforts to rein in inflation will require the Fed to tighten monetary policy aggressively. This prospect increases the risk the U.S. economy will stall and experience the dreaded “R” word later this year or early in 2023.

When the U.S. economy sneezes, Canada catches a cold

Growth of government spending, extremely stimulative monetary policy and a rebound in exports to the U.S. appear to have pushed growth in Canada above its long-term potential late in 2021. In March, the unemployment rate declined from 5.5% to a record low of 5.3%. As in the U.S., strong jobs growth against a background of negative real interest rates has fuelled demand for both new and existing homes, driving house prices up by +20% y/y.

The combination of a surge in oil prices, an array of supply shortages, and labor-related capacity constraints caused headline inflation in Canada to hit a twenty-year high of 5.7% in February.  As a result, inflationary expectations have, according to the Bank of Canada’s just-released Q1/2022 Canadian Survey of Consumer Expectations, reached record-high levels.

In March, BoC Governor Tiff Macklem stated that “a rising path of interest rates was on the horizon”.  With the recent 50 basis point hike in the BoC’s overnight rate, his words are coming true. Given the strong trade linkages between both countries, the indirect impacts of a tightening of U.S. monetary policy, coupled with the direct effects of rate hikes in Canada, are likely to exert a significant drag on economic activity north of the border later this year or early in 2023.

Looking ahead, the combination of slower growth in the United States and reduction of monetary stimulus in Canada significantly increase the risk that growth in Canada will flat-line or possibly retreat late this year or early in 2023. This prospect is reinforced by the fact that, as the chart illustrates, Canada’s economy has seldom been out of sync with the U.S. over the past 40+ years. 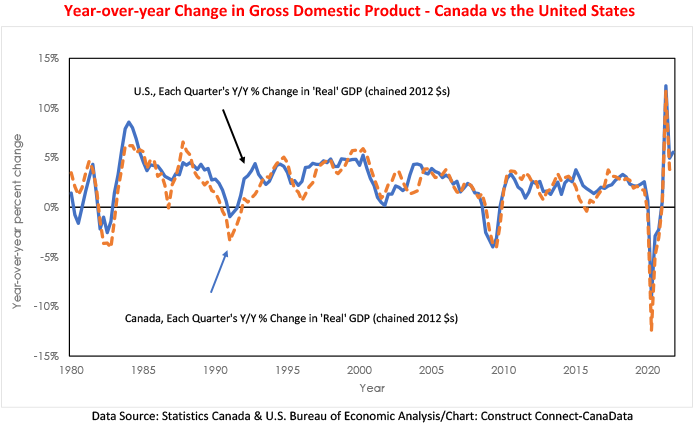 VANCOUVER — Some of the best consulting engineers in Canada have been honoured b...

WINNIPEG — Winnipeg is looking for ways to make its concrete last. The city’s p...