Tightening by U.S. Fed and Bank of Canada Heighten Risk of Recession

Global economic climate not deteriorating as quickly as expected

Forecasts produced by the Organization for Economic Co-operation and Development (OECD) and the International Monetary Fund (IMF) now project that the combination of inflation (currently running at a 40-year high of +10.7% y/y) and efforts by central banks to rein it in with higher interest rates, will cause global growth to slow to +2.2% in 2023, down from the previous estimate of 2.8%. This outlook is supported by the recent slide in the Composite Leading Indicator for most of the OECD’s major economies.

Further, in its latest (October) report, the IMF noted that the downside risks to the outlook remain unusually large. While these two prognosticators are both calling for a slowdown in global growth, labor markets across most countries in the OECD remain very tight. Within the euro area, the unemployment rate has stayed stable at 4.9%, the lowest reading since the series began in 1990.

The fact that firms are not laying off significant numbers of workers suggests the escalation in nominal interest rates has, to date, had a limited impact on overall economic activity. A key reason for this restrained response is that while there has been a (gradual) tightening of monetary policy in most countries over the past several months, real interest rates (i.e., after adjustment for inflation  ̶  see chart) remain in negative territory in every major developed country.

Also, although central banks have tightened monetary policy, fiscal policy is still expansionary as governments, mainly in Europe, try to shield households and companies from higher energy prices and the eroding impact of rising inflation on disposable incomes. As a result, monetary authorities are likely to raise interest rates higher for longer to cool headline inflation and anchor expectations. This prospect is exacerbated by the war in Ukraine which has put pressure on energy and food prices. The increased uncertainty will probably cause some firms to postpone and possibly cancel spending on major capital projects.

South of the border, the Federal Reserve has, over the past nine months, increased its fed funds rate from 0.75% to 4.25%, the highest level since the end of the financial crisis in 2007. However, while nominal interest rates have risen since the beginning of the year, real interest rates are still negative. Moreover, total employment is up by three million jobs and the unemployment rate at 3.7% remains close to the record low of 3.5% it reached in July of 2022. The Fed attributes this near record low unemployment rate, in part, to a drop in labor force participation caused by a post-pandemic surge in retirements.

The decline in the November Manufacturing PMI to a level of 49, below the recession-signaling mark of 50, does indicate that higher interest rates are cooling the manufacturing sector. However, the jump in the Services PMI from 54.4 to 56.5 suggests the services sector, which employs 85% of the U.S. workforce, is still expanding and that it is not going to collapse in the near term.

Consistent with the relatively positive labour market metrics noted above, the FOMC (Federal Open Market Committee) raised the fed funds target range from 4.25%-4.5%, its highest level since late 2007. Given the Federal Reserve’s recent announcement and the continuing strong pattern of government spending, we expect the fed will raise rates to 5.00%, and possibly even 5.50%, by mid-2023.

After underestimating inflation in 2022, BoC will hesitate before easing in 2023

Given that headline inflation, currently +6.9% y/y, is running well above the Bank of Canada’s +2% target and that growth in the third quarter (+2.8% q/q at an annual rate) was significantly higher than the consensus estimate of +1.4%, it’s clear the BoC’s efforts to cool the economy are not doing the trick. This observation was reinforced by the Bank’s policy rate announcement which stated that “growth in the third quarter was stronger than expected and the economy continued to operate in excess demand.”

The Bank of Canada may be understandably circumspect about further rate hikes, but with inflation well above the +2% target, it seems highly unlikely (to us) that the BoC will not raise rates further in the near term, probably by at least 50 basis points by the end of the first quarter of 2023. In our view, the U.S. Federal Reserve will adopt a similar strategy.  We expect the combined impact of this further tightening of monetary policy will cause economic activity to contract in both Canada and the U.S. in the first half of 2023. 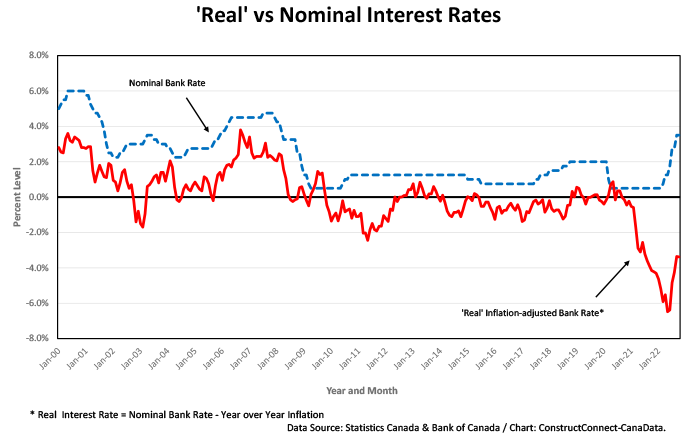