Vancouver, B.C. – The mortgage stress test and other government policies are hurting the homebuilding industry, a crucial part of the B.C. economy, residential construction experts say.

According to Neil Moody, CEO of the Canadian Homebuilders’ Association of B.C., the latest data released by Statistics Canada and the Canada Mortgage and Housing Corporation (CMHC) show growth may be slowing.

The data released for 2018 shows approximately 207,000 residential construction jobs for B.C., a less than 4 per cent increase from 2017 which showed a little more than 199,000 jobs. The data for 2018 also showed $12.6 billion in wages and $28.3 billion in built investment value. Some cities, like Kelowna, Nanaimo and Surrey, saw year-over-year dips in their residential construction jobs numbers.

The data tracks estimated economic impacts of residential activity for the previous year based on Statistics Canada and CMHC data. They include investment, direct and indirect employment, and wages paid. The scope of construction activities addressed includes new dwellings of all types, including both primary residences and cottages; renovation, conversion and repair of existing dwellings; and conversion of non-residential buildings to residential use. 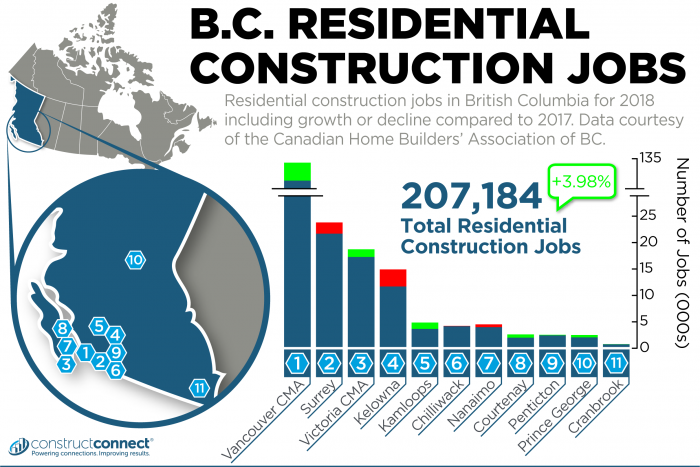 Moody said this has been compounded by B.C.’s speculation tax and amortization issues which have cooled housing demand and weakened consumer confidence.

With the federal election looming, Moody says the association has been in touch with local politicians and its members.

“They are very aware of the negative effects this is having,” he said. “There are still people moving because of affordability issues. The key is that is in all parts of the province, residential construction is important to the health of the economy.”

Moody said he looks forward to seeing what the data for 2019 will and that it will depend on what moves government makes to get more first-time homebuyers within reach of the market.

NEW WESTMINSTER, B.C. — A campaign by the BC Building Trades advocating for high...

VICTORIA, B.C. - The British Columbia government will lay out its case for build...