While its coastal views and international flavours may be a delight, Vancouver’s construction costs are not as serene and appetizing.

According to a recent international survey of construction markets, Vancouver is the most expensive place to build in Canada – and the 14th priciest location globally. The annual survey is conducted by Turner & Townsend, a multinational professional services company headquartered in Leeds, U.K. specializing in construction consulting. Its researchers found that each square meter built in Vancouver costs an average of US$2,720.80 to construct.

Gerard McCabe, Turner & Townsend’s managing director of Canada, explained that the key factors driving up construction costs in Vancouver and in other hot markets globally are volume and  labour.

“When you look at the volume of the construction activity, the impact of available resources really starts to have an impact on construction costs,” said McCabe. “The supply of trades, the availability of sub trades large enough to take on the large programs means that trades have to come from other locations. Companies are attracted to bid outside of market. It drives up costs.”

McCabe added that this can especially impact smaller cities, where just a few projects can be enough to saturate the market and create high labour costs.

According to the survey, real estate in Vancouver has begun to flatten out with the supply of new products. But mega-projects in B.C. like Site C and Kitimat LNG, combined with retiring skilled workers, are having a massive strain on the region’s labour. The survey shows Vancouver has the highest labour costs of the Canadian construction markets, averaging US$49.40 per hour.

McCabe noted that the coming year isn’t likely to show much relief. Turner & Townsend is predicting Vancouver will see the biggest rise in construction cost inflation in Canada at five per cent.

“Alberta, I hope, bottomed out and might start to pick up a bit,” said McCabe. “There’s probably going to be a slowdown in residential and high-rise building, and we are already seeing that soften, but some major infrastructure programs are driving the market.”

He noted Site C in B.C., Metrolinx projects in Toronto and various projects in Ottawa and Montreal have had a major impact on their respective market’s construction volumes.

“There’s a lot of volume there,” he said. “It’s still going to make those markets fairly hot for the next year or two.”

On the political front, McCabe suggested Alberta’s recent election of Jason Kenney as the province’s new premier could help improve its market.

“Like anything, in the run up to election, there tends to be a lack of stability,” he said. “There tends to be a slowdown in decision making in any major investment. I think, regardless of your political colour, a government coming in with a decent majority and mandate brings some level of stability and a certain level of business confidence.

He added that the Alberta situation is unique as it is still in a recession while B.C. and Ontario markets are hot.

“I think once this government settled in, they are going to pick where they will invest, and it is a good time to invest,” McCabe said. “Now is the time to build. It wasn’t that long ago when the costs were escalating so high and trying to find guys who weren’t working on the oilsands was pretty difficult.”

From an international perspective, McCabe explained that the construction industry is facing the same issue in many of the hot markets. As the volume of construction activity increases, labour becomes scarce and more expensive. And the industry has yet to rise and address the problem.

“One thing that is clear,” said McCabe. “There is a lack of innovation in construction. We are still doing things the same way since forever. The industry is still nowhere near as sophisticated as it needs to get. As things have changed globally in other industries, and other industries have adopted technology, the same impact hasn’t happened in construction. We are a bit behind the curve there.”

McCabe added that procurement, contracts, construction methods, manufacturing and all other aspects of the construction industry are ripe for innovation.

“The shortage of labour drives industry to find other ways to solve challenges,” he said. “We aren’t really seeing this in North America yet but I think as we look to the future, that is something we will need to do.” 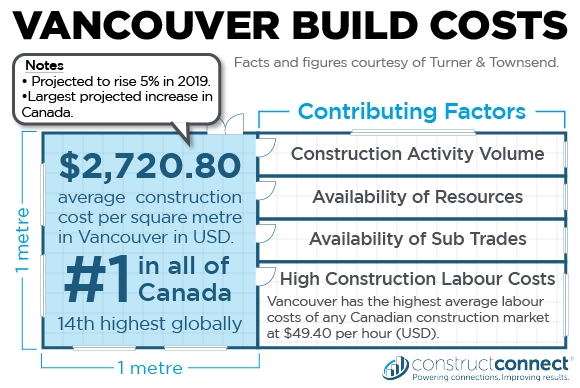