November’s U.S. employment report from the Bureau of Labor Statistics (BLS) records a net increase in the nation’s jobs count of +266,000. Such a large gain, however, is somewhat distorted by a +54,000 increase in manufacturing jobs that comes on the heels of a -43,000 decline the month before. The big swing from one month to the next was mostly due to the onset of the strike at General Motors in October, followed by resolution four weeks later. 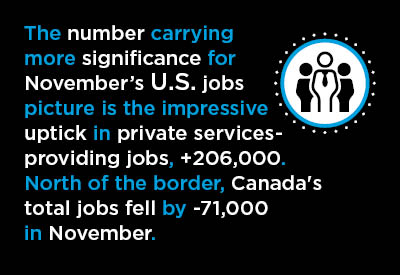 Hiring by government continued to be restrained, +12,000, and it was all at the local level, +13,000, as the states kept their staffing flat and Washington made a minor reduction, -1,000.

Graph 1 shows the relative year-over-year changes in employment achieved by the economy’s major sub-sectors. ‘Education and health’ (+2.8%) has moved into first place ‒ a position previously often occupied by ‘construction’ ‒ with ‘leisure and hospitality’ (+2.5%) in second.

Construction has dropped back into third spot, tied with ‘professional and business services (both at +2.0%).

Employment in the construction sector in November versus October was almost unchanged, +1,000. The monthly average construction sector jobs count with only December still to go has been +12,000, a drop of more than half (-55%) versus 2018’s comparable figure of +26,000.

Graph 2 showcases how put-in-place investment spending on total construction in the U.S. has been making no headway since the beginning of 2018.

Delving deeper into the latest construction data, there are signs that a revival in homebuilding may be emerging. Permits have been trending upwards faster than unit-starts. 1.4 million (annualized) units for starts is now within sight. For too long, 1.3 million was the best that could be hoped for.

Graph 3, however, shows one market segment of construction offering an extreme challenge, manufacturing. A peak was reached in mid-2015 and has not been replicated since.

Nor are wages in construction keeping up with what is occurring in the overall economy. In November for ‘all jobs’, not including supervisory personnel, hourly and weekly earnings were +3.7% and +3.0%. For construction workers, compensation gains rose less at +2.0% hourly and +2.5% weekly.

According to Statistics Canada, the total jobs count north of the border fell by -71,000 in November. The decline was split almost evenly between full-time (-38,000) and part-time (-33,000) work. And it occurred almost entirely within the private (-69,000) (i.e., as opposed to public/government) sector.

Especially noteworthy for Canada’s labour market this year has been the fact that services jobs have averaged +32,000 monthly, a doubling versus last year’s +16,000.

Canadian construction employment in November was +5,000, but only +12,000 year to date. But that’s a lot better performance than the nation’s manufacturing sector has been managing. The number of Canadian production-line jobs in November was -27,000, after a drop of -23,000 in October. Year-to-date manufacturing jobs are -44,000.

From Table 11 of Statistics Canada’s latest Labour Force Survey, both average hourly and weekly wages cross-country were +4.5% year over year in November. Those are rates of compensation increase well ahead of U.S. results.

Provincially, the lowest unemployment rate in the land is still to be found in British Columbia, 5.0%. Three other provinces are tied for second place at 5.6% ‒ Quebec, Ontario and Manitoba.

As for employment growth year over year, Ontario (+3.2%) is leading the way, with much less-populous Prince Edward Island (+3.1%) only a step behind.