The U.S. and Canadian central banks are determined to slow their economies enough through interest rate hikes to put a choke hold on inflation (which, by the way, is showing signs of relenting in both countries). The ‘slowing of the economy’ part of the plan is worrisome because it might bring on recessions of who knows what duration or magnitude. 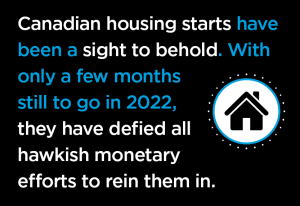 Since the beachheads of recession north and south of the border will almost certainly be established in residential real estate markets, this edition of the Nuggets report will concentrate nearly exclusively on the latest home building statistics for the U.S. and Canada.

(1) Developer confidence in the U.S. single-family marketplace declined for the eleventh straight month in November, according to the Housing Market Index (HMI) calculated by the National Association of Home Builders (NAHB) and Wells Fargo. Given that the index reading can vary from a terrible 0 to a joyous 100, the latest figure of 33 was quite weak. It was at its lowest point, other than for a brief moment in the earliest stage of the pandemic (Spring 2020), since June 2012. Affordability is being negatively impacted by mortgage rates that have doubled to 7.00% or more as part of the Federal Reserve’s tightening push. Traffic at showrooms has plummeted.

(2) NAHB also monitors (quarterly instead of monthly) the sentiment of builders in the multi-family segment of residential construction. It has tended to be more upbeat than for single-family groundbreakings, but some slippage first became apparent in the third quarter of this year. 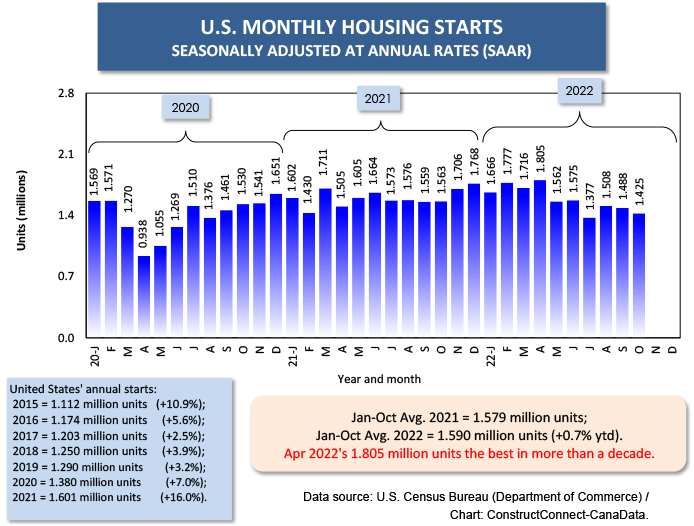 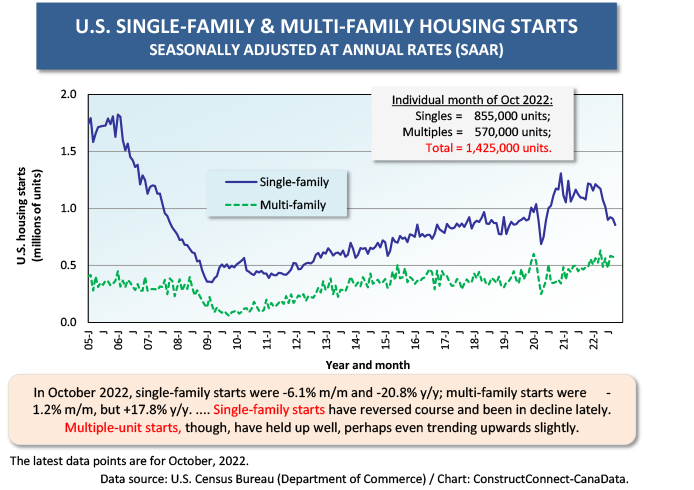 (4) U.S. single-family housing starts (in units) as a share of total have now fallen to 60%, which is about as low as they have ever been. Multiples are currently making up 40% of the total. I keep wondering when the U.S. is going to reach that ‘magic’ 50-50 mark. In Canada, multiples as a share of total are far more dominant than singles. Nation-wide north of the border, the proportions, based on units, are 78% of total for multiples and only 22% for singles. For the country’s biggest cities by population, the relationships are even more exaggerated. In both Toronto and Vancouver, the shares year to date are 14% singles and 86% multiples. In Montreal, the singles market is retaining only 7% of the total ytd. Multi-unit starts are 93% of total ytd. 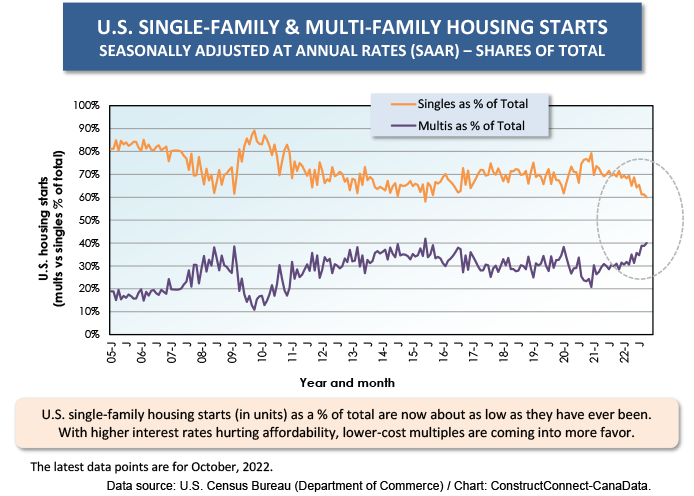 (5) The assumption is usually made that the number of U.S. residential building permits issued is a good leading indicator for how the ‘starts’ series will shape up in a couple of months. Right now, the permits data set does not offer much encouragement. Accompanying Graphs 4 and 5 show that permits for the U.S. as a whole, measured in units, are on a clear downward trend. 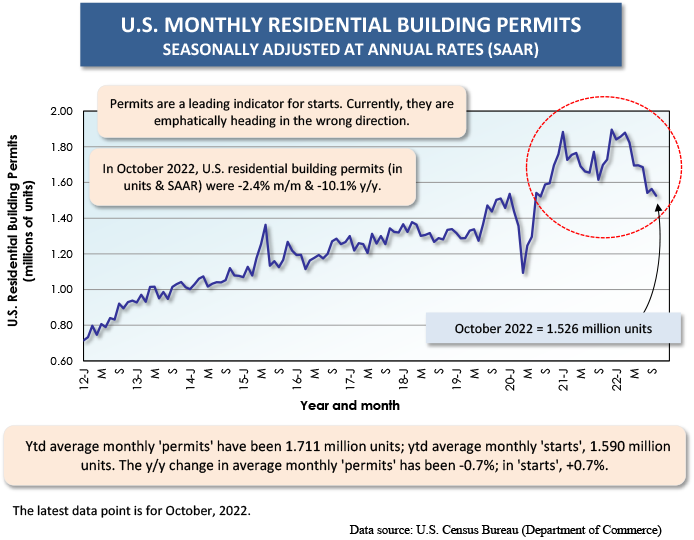 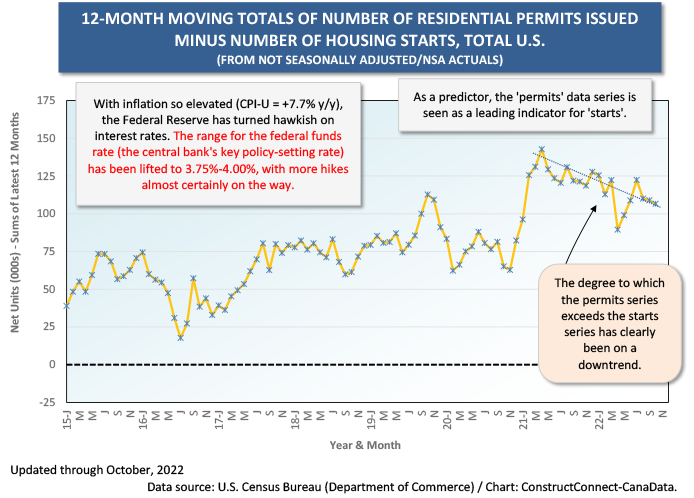 (6) Regionally in the U.S. in October, monthly average housing starts held up best in the South year to date, +3.1% compared with the monthly average for Jan-Oct of last year. Only a little behind was the Northeast, +2.5%. The Midwest was flat, 0.0% and the West, in the hole, -4.5%. In the individual month of October, there were year-over-year setbacks in all four regions. The worst was the West, -19.6%, followed by the Northeast, -15.8% and the Midwest, -13.6%. Hanging in with a nearly level percent-change figure versus October 2021 was the South, -1.1%.

(7) Canadian housing starts have been a sight to behold. With only a few months still to go in 2022, they have defied all hawkish monetary efforts to rein them in. Their 299,000-unit level (SAAR) two periods ago in September was the highest monthly number for 2022. In October, they did ease back a little, to 267,000 units. But keep in mind that both the annual and monthly (annualized) averages over the previous two decades and a bit was 200,000 units. 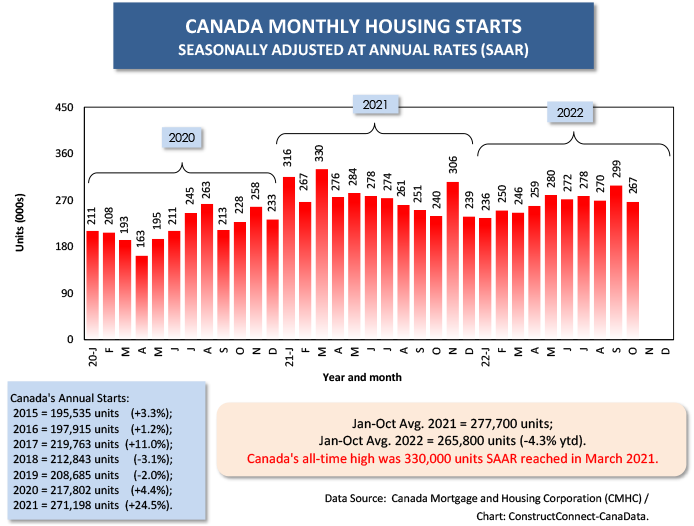 (8) I always find the tracks depicted in Graph 5 to be remarkable. On a per-capita adjusted basis, (i.e., factoring in that the population of the U.S. is almost exactly nine times greater than the resident count for Canada), housing starts in Canada have exceeded what has been reported in America in every month for nearly 17 years. Canadians love their residential construction. 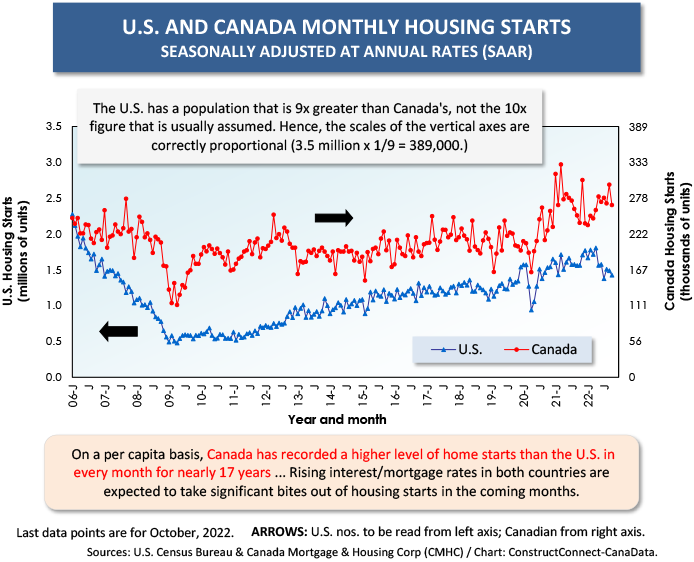 (9) By province, the most notable pickup in new home starts year to date in Canada has occurred in Alberta, plus a quarter (+25%). (New Brunswick, +30%, and Newfoundland and Labrador, +22%, have also done well when it comes to unit-based percentage change, but those two provinces have relatively small population counts.) Ontario and B.C. have experienced slight declines, -1% and -3% respectively. Quebec has found itself on a bumpier road, -12%. 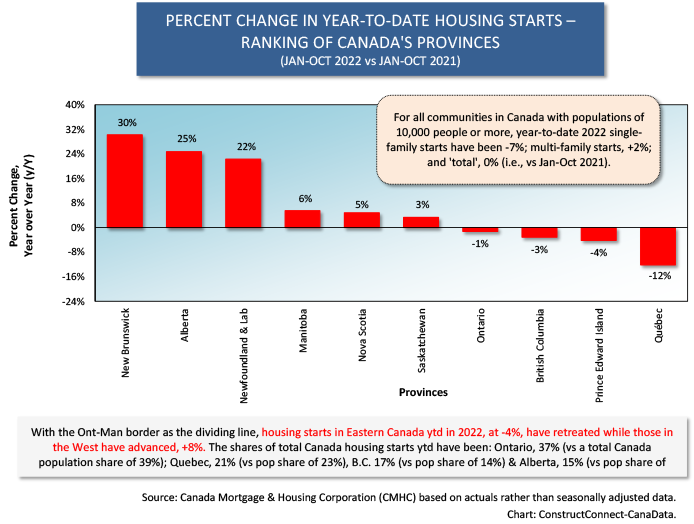 (10) In Canada’s six largest cities, ̶  i.e., the only ones with populations above a million each – the biggest year-to-date increases in housing starts have been chalked up by Calgary and Edmonton, each at plus a quarter (+25%). Next in line is Ottawa-Gatineau, +19%. Toronto has also seen a gain, +7%. Vancouver, -8%, and Montreal, -19%, have failed to advance. In Canada’s three major condo building markets, Toronto (as per usual), with 30,700 units ytd remains the star, with Montreal (20,500 units) and Vancouver (17,700 units) playing supporting roles. Only Toronto among the three has managed a condo units advance, +10.4%. Vancouver is -10.0% and Montreal, -17.4%. Those three cities, though, presently account for half of all multiple-unit starts across the country. Toronto alone has a nearly one-quarter (22.7%) share. 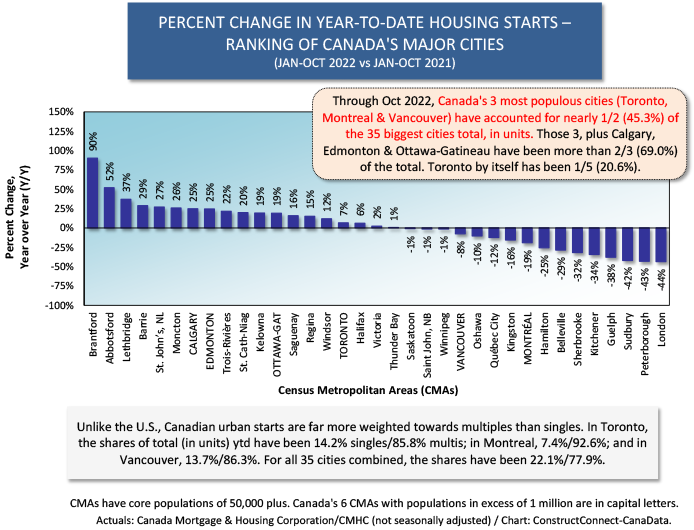