The construction of massive buildings and bridges tends to attract a lot of attention. However, the $765-million upgrade of Ontario’s Public Safety Radio Network (PSRN) has been achieving its ambitious goals more modestly, antenna by antenna and radio by radio. Announced in 2019 by the Ontario provincial government, the project aims to renew a radio network used by 38,000 frontline and emergency responders over 750,000 square kilometres — the largest such system in North America. Last replaced in 1998, the network had been reporting daily outages and was rapidly falling behind other North American jurisdictions.

The contract to build the system’s land mobile radio network — which includes core infrastructure, support antennas, servers, and data centre equipment — was awarded to Bell Mobility Radio. It will also provide first responders, as well as their dispatchers, with new radio equipment and consoles and provide network and radio equipment maintenance services for 15 years. 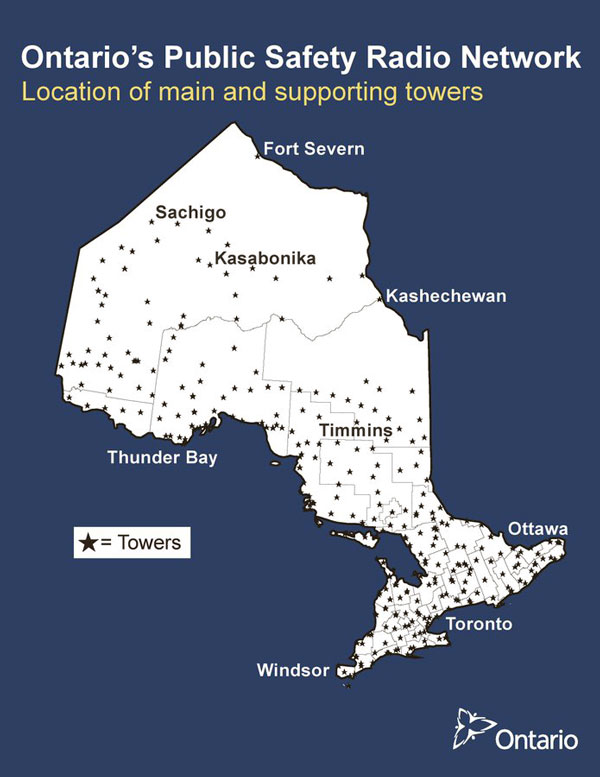 “The modernization project will ensure the new network is built based on the P25 North American open standard for public safety radio,” says Brent Ross, a spokesperson for the Ministry of the Solicitor General. “The new network will provide encryption capabilities that will protect information that is shared over the radio, including critical information on enforcement activity and personal health information.”

The network includes four master sites and 193 network towers. An additional 282 towers support communications for forest firefighters. In many cases the work may be invisible to the public, carried out in remote locations or involving the installation of new antennas on existing radio masts and towers.

Other vendors on the project include Motorola Solutions Canada and Cartel Communications, Inc., a supplier of wireless communications products and services.

In addition to working on sub-contracts for the overall PSRN renewal program, Williams Communications was awarded the Facilities Radio Network (FRN) contract to design, upgrade and maintain the Corrections and Youth Justice Radio Network. It’s the key communications system serving Ontario’s 31 correctional and youth institutions and their 8,000 employees.

“It’s a substantial contract and involves forklifting out the entire system at each location, and replacing it with new equipment, from lightning arresters to cabling systems and distributed antenna systems,” says David McIntyre, president at Williams Communications. “Officer safety will be improved, coverage will be improved, and reliability and redundancy will be improved 100 per cent.”

“The network is expected to be fully operational across the province by the end of 2024,” says Ross.

Canada needs to export more energy to more markets in more parts of the world....

After more than a few years of planning and studies, a $295 million, a three-yea...

Warming temperatures will devastate Canadian infrastructure across the territori...

The British Columbia Institute of Technology (BCIT) is doubling down on building...

TORONTO — A supervisor for a Toronto company has been fined after a worker they...