Canada’s four western provinces could face a significant shortage of some construction trades in the coming years, according to data in reports released recently by the Canadian Apprenticeship Forum (CAF).

Separate 2021 labour market information reports and accompanying numbers for B.C., Alberta, Saskatchewan and Manitoba indicate anticipated apprenticeship certifications for bricklayers, boilermakers and carpenters will fall well short of demand over the next decade in each of the provinces.

The three skilled trades are deemed to be “at risk,” which means the certifications required exceed projected completions.

Welders were also found to be at risk in all four provinces, while in Manitoba mobile crane operators are also expected to be in short supply.

CAF project manager and researcher Emily Arrowsmith says bricklayers and boilermakers are at the top of the provincial lists for different reasons.

Bricklayers are simply getting older and retiring and there has been a decline in new apprentice registrations, she says, while boilermakers have seen significant rise in demand for services in recent years.

“It is a relatively small trade which requires a high level of skill. This makes ramping up training a challenge.”

The reports draw together apprenticeship data and projections to provide a forward-looking assessment of the demand and supply for trade certifications in 15 Red Seal trades, including 10 in construction. 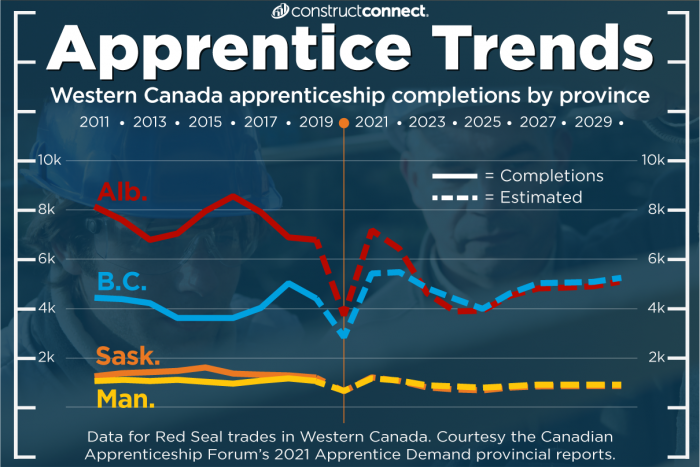 Arrowsmith says the number of apprentices being hired by companies is dependent on the employment situation and, if there are fewer jobs available, registrations often decline correspondingly.

“As employment falls, so do registrations, but harder because experienced, displaced workers fill any vacancies.”

The high level of uncertainty related to COVID-19 likely contributed to the drop in apprenticeship registrations, according to Arrowsmith, as, “you train for the future, if that’s uncertain your decisions are delayed.”

Social distancing measures restricted the total number of workers able to work together, she notes, and therefore more experienced workers were likely selected for employment and not apprentices.

A final reason for the decline, she says, was likely the additional administrative barriers to registering for an apprenticeship or in-school training during the pandemic.

The individual reports indicate each province had differing circumstances that affected apprentice registrations in 2020 but all are anticipating needing to recruit more trainees in the years ahead.

Alberta, which was hit hard by declines in investment in 2020, will still likely require approximately 63,380 new certified journeypersons over the next decade, the CAF report suggests, and efforts must be undertaken to increase the number of registrations or improve the completion rates for apprentices.

Encouraging more women and other underrepresented groups to pursue careers in construction and industrial trades could also increase the amount of available labour, according to the CAF report on Alberta.

B.C., which experienced an 11 per cent decline in the construction industry in 2020, will still require nearly 47,800 new certified journeypersons over the next decade.

In the near-term, a significant rise in non-residential construction investment, driven by several major pipeline, transportation and other public infrastructure projects is projected to dramatically increase demand requirements for skilled workers.

The challenges of meeting the ramp-up in major-project requirements may be somewhat lessened by the potential mobility of workers from other sectors that weakened in 2020, the CAF report for the province states.

However, to keep pace with demand over the long-term, the report notes the province will need to continue to recruit and train apprentices, particularly for those trade occupations that are at risk.

Saskatchewan is expected to need 11,470 new certified journeypersons over the next decade. Demand for journeypersons declined significantly following the collapse of the resource expansion in 2015, but the province is set for recovery in 2021, although growth will depend on the timing of projects.

Manitoba, meanwhile, will likely require 9,240 new certified journeypersons over the next decade.

Prior to the pandemic, the province experienced a year of bolstered demand, driven by major hydro-related projects, infrastructure investment and immigration-driven population growth. Construction employment in the province declined by eight per cent in 2020 due to the broad economic impacts of COVID-19 and lower demand for workers at the Keeyask Generating Station project.

Over the near-term, demand requirements are expected to recede, resulting from the wind down of the Keeyask project, lower levels of road, highway and bridge work and a continued downward trend in new housing construction.

To offset potential trades shortages, CAF has been encouraging employers to hire, train and retain women through its national strategy to Support Women in the Trades which was developed by employers, labour groups, educators, representatives from trades and regions.

CAF hopes to increase the proportion of women apprentices and journeypersons who work on-the-job by 15 per cent by 2030.

The newest COVID-related challenge buffeting Canada’s construction sector is not...

Alberta’s 2022 budget has arrived and many in the province’s construction sector...

The Construction Record Podcast – Episode 157: The future of construction with Procore’s Jas Saraw

How tall buildings can be good neighbours

When designing tall buildings, it’s important to consider how it lands on the gr...

REGINA – The Government of Saskatchewan is investing in short rail through its S...