Higher carbon prices could be a ‘windfall’ for construction: Report

Canada’s construction industry could be in for a windfall from proposed higher carbon prices, according to a report prepared by a University of Ottawa policy think-tank for Canada’s Building Trades Unions.

The higher prices are expected to spur a wave of investment in new construction, shifting economic activity to the industry, and generating thousands of new jobs and billions of dollars in income.

The report indicates an additional 19,000 construction jobs will be created by 2025 due to higher carbon prices, along with 20,500 in other sectors of the economy, while economic activity in construction will be more than $2.5 billion higher, with Saskatchewan seeing the highest proportion of new jobs created.

Mike Moffatt, senior director, policy and innovation at the Smart Prosperity Institute (SPI) which prepared the report, says there was skepticism amongst some as to whether higher carbon prices would benefit construction but, in the end, the study showed the industry would be a big winner.

“Logically it makes sense because when carbon prices get high you see a lot of retrofits and older buildings getting knocked down as companies and individuals start making investments. They want to reduce their tax bill. That was the experience in other jurisdictions so we wanted to see if that would hold here.”

Other jurisdictions have found that carbon pricing done well doesn’t affect the economy much, says Moffatt, but it does shift economic activity.

“Ironically enough, the construction industry is one of the big beneficiaries of that. It’s one group that tends to be skeptical of carbon pricing, but they actually do quite well with it. What happens is people build more because they don’t want to pay the tax.” 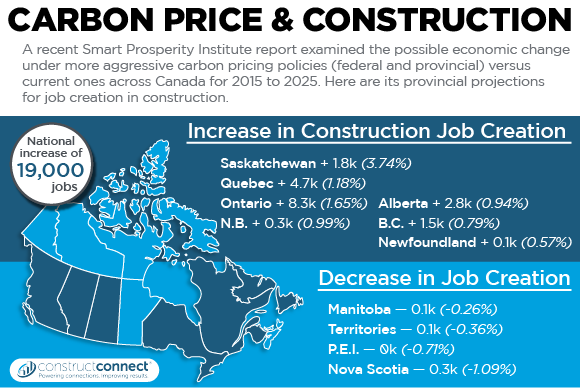 The report came about after the building trades asked SPI how carbon taxation would impact the industry and its members. The question was important, given that the construction sector represents 14 per cent of Canada’s GDP. The SPI decided to look into the matter and the result was the report: Construction & Carbon: The Impact of Climate Policy on Building in Canada in 2025.

“Their members had concerns about what carbon pricing and taxes are going to mean for their industry,” says Moffatt, noting that the building trades wanted to be prepared for the good and bad.

While research found that the carbon pricing policies will cause the economy to be slightly smaller in 2025 than it otherwise would have been, construction is expected to do exceptionally well.

In doing research and talking to people, Moffatt found the view was that there would be jobs created in construction, but there were concerns it would mostly be installing solar panels and wind turbines.

Indeed, the study found that some of the money will be spent on renewable energy projects, but the bulk will go to building upgrades and installing structures like carbon capture and storage units and natural gas plants.

One particular area expected to do well, says Moffatt, is the HVAC sector, and companies installing heating and cooling systems, as they will be called on to do upgrades and make systems in new and existing buildings more efficient.

The study also found that, while higher carbon pricing will create construction jobs, they will not be spread evenly across the country.

Not surprisingly, over half of the new jobs will be created in the two biggest provinces, Ontario and Quebec. Alberta, meanwhile, will see nearly twice as many construction jobs than neighbouring B.C. although that province is much larger.

Surprisingly, in relative terms the best performing province for construction employment increases is Saskatchewan. Without higher carbon prices, the province was expected to see a slight decline in construction jobs, but with more aggressive carbon policies it should experience a gain.

“One of the big findings is that in Saskatchewan you see a lot of building going on there which surprised me at first,” says Moffatt. “But it looks like a few things are going on there.

“First of all, with higher carbon prices, coal just isn’t competitive any more so you start to see all the coal plants get shut down and replaced, partly with renewables, but partly with things like natural gas.”

Moffatt says natural gas has a lower carbon footprint and “obviously somebody has to build those facilities and that’s going to be the construction industry.”

More renewables like solar and wind coming online also creates additional work because power lines have to be upgraded as older lines can’t handle the load of power going on and off all the time, says Moffatt.

Meanwhile, Alberta and to a lesser extent Saskatchewan are also positively affected by carbon capture storage as oilsands companies try to figure out ways to capture and store carbon dioxide emissions and, instead of releasing them into the air, pump them back into the ground to avoid paying the carbon tax.

Overall, the study found that businesses will invest $12.5 billion more as a result of aggressive carbon pricing, while consumer spending will grow by $7.1 billion. The bulk of consumer spending is likely to come from new spending that households will make on new home construction and retrofits.

‘We are sitting on a goldmine of renewable energy’: SFU policy expert

The future of reaching B.C.’s looming energy needs could be sitting underneath o...

Canadian designers, developers have ‘a lot to learn’ from Asian cities, says panellist

The Canadian design and development world can see the future if it looks to Asia...

MONTREAL — The Quebec government has approved construction of the Appalaches-M...

The pressure for the construction industry to embrace processes and materials th...

OTTAWA — The Canada Infrastructure Bank (CIB) and ITC Investment Holdings have a...

REGINA — The Regina Red Sox Baseball Club has released concept plans for a 3,500...