The story of the recent deterioration in U.S. and Canadian housing starts can best be told through a series of graphs. Both nations began this year with relatively high levels of residential groundbreakings. 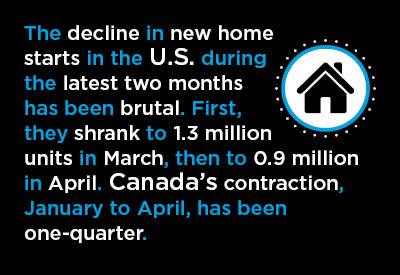 The decline in new home starts in the U.S. during the latest two months, however, has been brutal. First, they shrank to 1.3 million units in March, then to 0.9 million in April.

New home starts in America in April were cut by nearly half (-45%) versus January.

Canada’s contraction, January to April, has been one-quarter. The 166,000-unit figure for Canada in the latest month, though, comes with an asterisk. Construction in Quebec was shut down in April, yielding housing start counts of zero throughout the province. (Never before has there been a non-existent official number for housing starts in Montreal in any month.)

Quebec’s construction scene is open again as of May 1st.

Pennsylvania also placed a ban on construction in April, but the state’s relationship to ‘total U.S.’ statistics is smaller than the Quebec-to-Canada one. (Quebec accounts for 22.5% of Canada’s population.)

Just the same, the stark Northeast Region housing start statistics appearing in this article have been pushed downwards by the brief halt in Pennsylvania site work.

The last data points are for April, 2020.
ARROWS: U.S. numbers to be read from left axis; Canadian from right axis.

Multi-family Living falls out of Favor

As mentioned previously, total U.S. housing starts in April were -30% month to month and -45% since January, at the beginning of this year. The ‘single-family’ versus ‘multi-family’ composition of total starts is taking an interesting turn.

In a time of ‘social distancing’, the demand for new high-density multi-family units has fallen out of favor. U.S. single-family housing starts in April were -25.4% month to month. Multi-family starts, though, were more negative, -40.5%.

More disturbing yet, consider what’s happened relative to January. Compared with January’s number-of-unit levels, singles in the latest month were lower by a third (-34%), but multis were down by nearly two-thirds (-62%).

Year to date, singles (in units) have accounted for two-thirds of total starts and multis, the remaining one-third. The respective shares will continue to be weighted more towards singles as the year continues to unfold.

As for total residential building permits, on a SAAR basis, they were -20.8% month to month in April. Compared with January, they were -30.1%.
Usually permits lead starts, but at this time, it may simply be the case that taking out a permit is an easier exercise than physically putting a shovel in the ground.

Regionally in America, the Northeast and West staged the speediest retreats in housing starts in April, -43.6% and -43.4% respectively. The South’s decline was -26.0%. The Midwest, by comparison, was barely bothered, -14.9%.

Clearer pictures of the plummets in the Northeast and West are more apparent, however, when April is held up against January. April’s drop versus three months earlier was -60% in the West and a throat-tightening -80% in the Northeast.

Based on monthly figures that have been seasonally adjusted and annualized (SAAR).

In Canadian provinces and cities through April, the balance between plus percentage changes and minuses for year-to-date housing starts was still leaning slightly more towards the ‘up’ side.

Prince Edward Island and New Brunswick have seen a doubling in their new home groundbreakings year to date. At the opposite end of the spectrum, B.C. has witnessed a one-quarter decline. The province of Quebec is also severely down (-27%), but the government-decreed site-work shutdown in April has muddied the statistical waters.

Among Canada’s six cities with populations in excess of a million people, Edmonton has done well in housing starts year to date, +33%. The nation’s capital, Ottawa, is also firmly ‘in the black’, +22%.

Vancouver’s experience, though, has been far less sanguine, -34%.

VANCOUVER — The search is on for an Indigenous logo for the Independent Contract...

What it takes to secure and refresh your brand in construction

At the end of May, Kindred Construction Ltd. moved from its former headquarters...

SURREY, B.C. — B.C. is moving forward with a new hospital and BC Cancer Centre f...

A fire-ravaged B.C. town is starting the road to recovery with two new sustainab...

TORONTO — Skills Ontario is hosting summer camps for youth across the province e...