Click here for free access to Canadian public sector construction bids & RFPs
Home News Economic Prior to and in Midst of Pandemic, which U.S. States doing Best?
Economic, US News

Prior to and in Midst of Pandemic, which U.S. States doing Best? 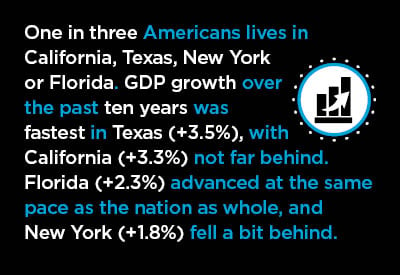 North Dakota’s rapid growth was front-end loaded. Bakken shale oil development sent the state’s output level soaring in 2011 and 2012, to the tune of +11.3% and +22.4% respectively. During the past seven ‘quieter’ years, North Dakota’s annual average GDP gain has been only +0.8%.

Only two states were burdened with annual average GDP growth rates that were negative in the past decade, Wyoming (-0.5%) and Alaska (-0.2%). Two others, though, managed only minimal headway, Connecticut and Louisiana, both at +0.1%. Mississippi and Delaware also didn’t have much to celebrate, each at +0.5%.

One in three Americans lives in California, Texas, New York or Florida. Furthermore, at a combined 36.6%, those four states account for a little more than one-third of U.S. total GDP.

Among the four most populous states, annual average GDP growth over the past ten years was fastest in Texas (+3.5%), with California (+3.3%) not far behind. Florida (+2.3%) advanced at the same pace as the nation as whole, and New York (+1.8%) fell a bit behind.

The long-term GDP performances of California, Texas, New York and Florida are set out in the first panel of charts.

The second panel of charts features GDP results for the four states that exhibited speediest GDP growth over the past ten years, other than Texas and California. Panel two keys on Washington (+3.6%), Utah (+3.2%), Colorado (+3.0%) and Oregon (also +3.0%).

Panel two highlights a key development in U.S. regional growth. All four of the states in panel two are in the West. They are also all high-tech hotbeds.

Leaving out North Dakota, five of the six states with the best GDP growth rates over the past ten years are in the West – Washington, California, Utah, Colorado and Oregon. All three states along the Pacific Coast are in the ‘elite’ six.

Among other states, only Texas managed to climb near the top of the leader board. Other than Texas, South Carolina (+2.5%) had the best record among non-western states.

Therefore, the analysis of most recent state GDP growth rates must be confined to Q1.

Washington was the first state severely impacted by the arrival in America of the coronavirus. The next state to see a debilitating flareup was New York.

Previously, it was mentioned that Nevada (-8.2% q/q annualized) and Hawaii (-8.1%) recorded the worst Q1 GDP results among all states. They were brought low by two important pockets of the economy, ‘accommodation and food services’ and ‘arts, entertainment and recreation’, that suffered through devastating declines in Q1 of -26.8% and -34.7% respectively.

The only sector with a major output increase in Q1 was ‘agriculture, forestry, fishing and hunting’, +15.5% annualized. Such a good showing helped states in the farming heartland of the country (i.e., Nebraska, South Dakota and Kansas) tread water while others were sinking.

The ‘construction’ sector’s GDP-related change in Q1 2020, as calculated by the BEA, was an acceptable-under-the circumstances +0.8% annualized.

REGINA — SaskTel has announced efforts to boost its investment in the province’s...

The architectural community in Ontario is on the brink of having its first local...

This week’s top DCN headlines cover the speech from the throne and what it means...

Faced with some of the world's priciest building costs, developers in the San Fr...