ConstructConnect’s annual construction starts statistics for ‘bricks and mortar’ retail sites are set out in Graph 1. The history goes back to 2005 and the forecast portion of the chart extends to 2026. 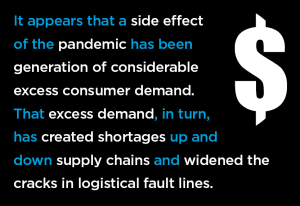 Under intense pressure from a rapid expansion of Internet online selling sites, physical retail construction starts contracted dramatically from 2016 through 2020. Then something interesting happened.

In 2020, with the arrival on the scene of the coronavirus, and most consumers following stay-at-home directives, there was a proliferation in purchases sought out and finalized by digital means. (As a sidebar, non-store retail sales have now tripled as a share of total retail over the past 20 years, going from 6% to 18%.)

But 2020 was also the year in which bricks and mortar retail construction starts stopped falling. In 2021, they picked up slightly and in 2022, they are looking to provide another incremental increase.

ConstructConnect is predicting they will keep on climbing gradually through the outer range of the forecast period.

From great variety to easy price comparisons, there’s a lot to like about shopping online. But there’s also much that’s appealing about taking oneself and/or a family member or two out for a hands-on shopping experience and to enjoy the entertainment that comes from mixing and mingling with other shoppers and helpful staff.

Therefore, there’s every reason to believe that shopping/retail construction starts, with mask mandates being set aside, will be on the comeback trail over the foreseeable future.

Recently, there’s been a pattern to total retail sales that has sprung from or may be a cause of the major concern of the day, exceedingly rapid price inflation. As this article’s headline suggests, there’s a which-came-first, the chicken or the egg, situation to be explored.

Beginning in the second half of 2020 and arising from income supplement programs, a dearth of alternative spending avenues (no travel, no concerts, etc.), a desire to improve one’s home environment (since it was becoming even more of a sanctuary), and fueled, let’s face it, by an element of stay-at-home boredom, U.S. retail sales took off into orbit (Graph 2).

On a monthly basis, U.S. total retail sales are now breezing along at a level much higher than their 2009-2019 linear trend line pace. For them to be so markedly and upwardly bumped out of their rut suggests something pretty significant is going on.

It appears that a side effect of the pandemic has been generation of considerable excess consumer demand. That excess demand, in turn, has created shortages up and down supply chains and widened the cracks in logistical fault lines.

The excess demand, according to many analysts, is one of the prime reasons costs have escalated dramatically and the year-over-year change in the Consumer Price Index (CPI) has become so robust.

But those same analysts are now faced with a dilemma. What’s happening with ‘real’ retail sales? As is discussed in the text boxes of Graph 3, many of the outsized y/y advances in sales being experienced by sub-category shopkeepers are, in fact, due to price increases.

From Graphs 5 and 6, Canada is not experiencing the problem of excess demand to the same extent as the U.S. Canada’s total retail sales are much closer to what would be expected from past history.

Either because of, or due to, this turn of events, Canada’s inflation rate, while elevated, is not quite as forbidding as its counterpart in the U.S. In September, Canada’s year-over-year CPI was +6.9% to America’s +8.2%.

Admittedly, there’s not much difference between the Bank of Canada’s key policy-setting interest rate of 3.75% and the Federal Reserve’s federal funds range of 3.75% to 4.00%. But the Governor of the BOC is speaking softer on the prospect of future hikes than is the Chairman of the Fed.

As a final point of interest on the subject of retail sales, both U.S. and Canadian building material suppliers are recording percentage-change increases that are in double-digits, +11.3% and +12.1% respectively. Again, though, mark-ups on shelf stock have undoubtedly been a key factor.

The subject of construction material cost increases is covered extensively at this link.

Lowes Cos Inc, based in North Carolina, is choosing this moment to divest its Canadian operations, which include hundreds of outlets and 70 big-box stores. Lowes landed in Canada 15 years ago, in 2007. Over the intervening years, it’s had some rocky moments acclimatizing to the local retail scene. Its acquisition of RONA took a couple of tries. Reno-Depot was another pickup. The purchaser of Lowe’s northern assets is New York-based private equity firm Sycamore Partners. 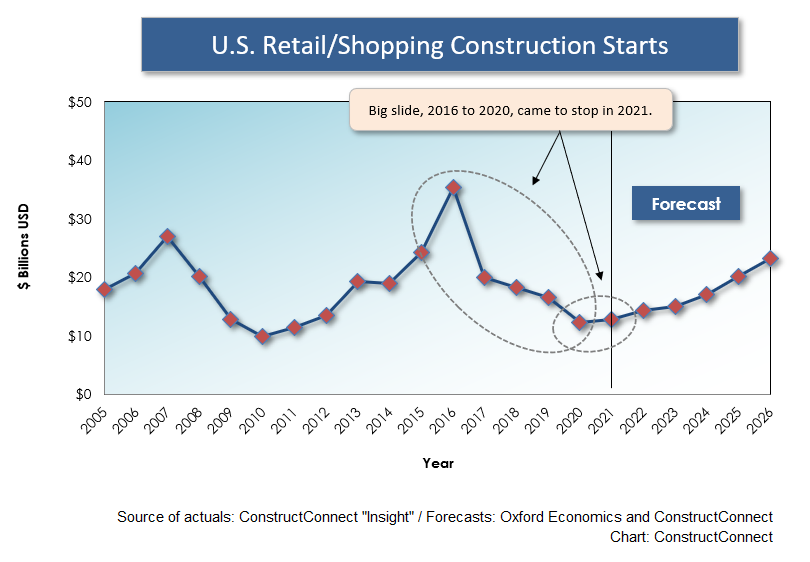 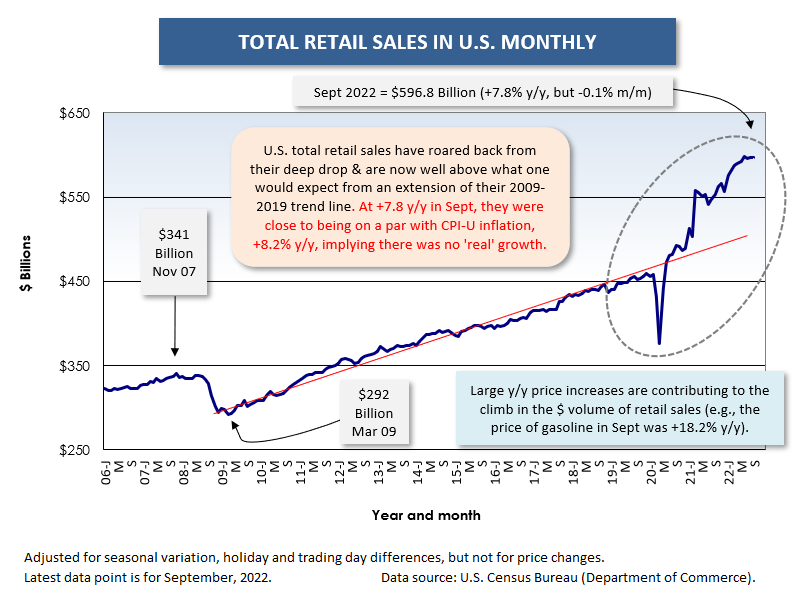 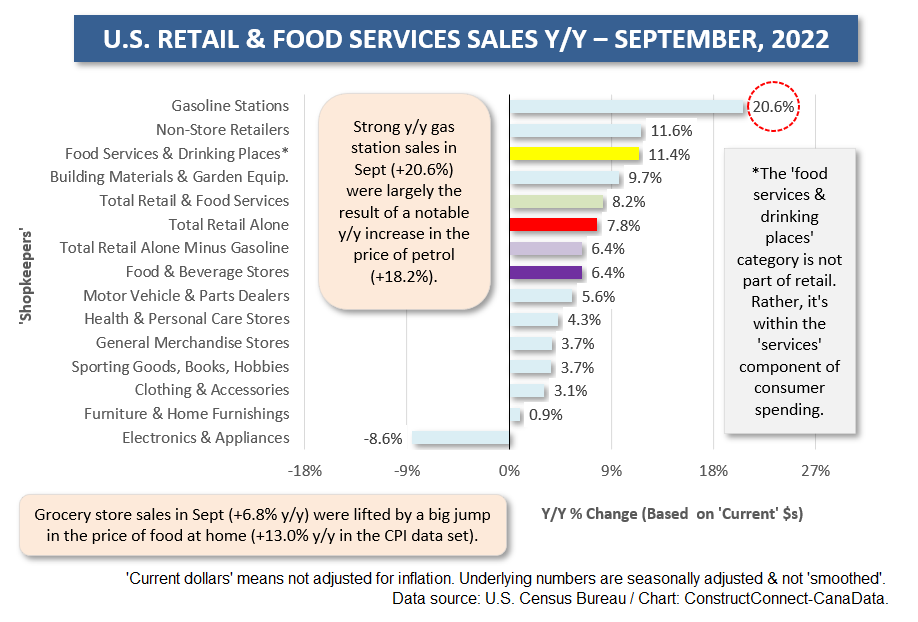 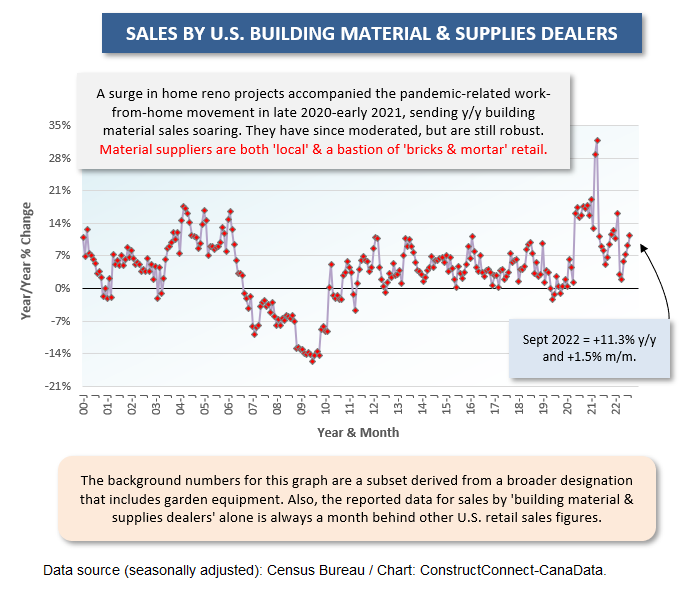 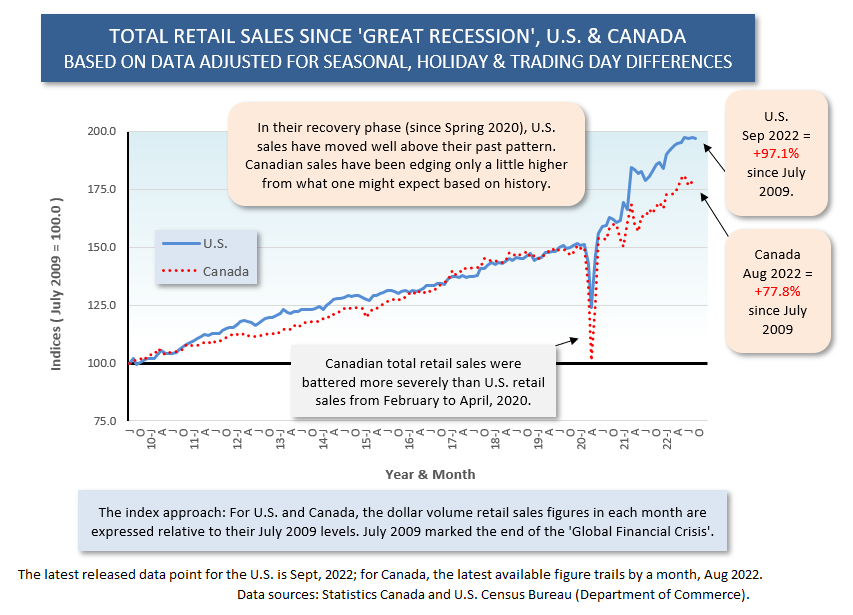 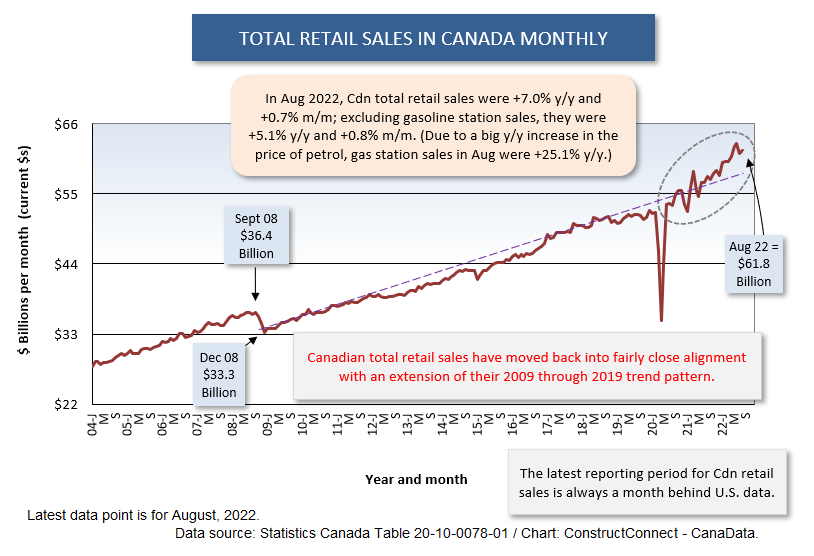 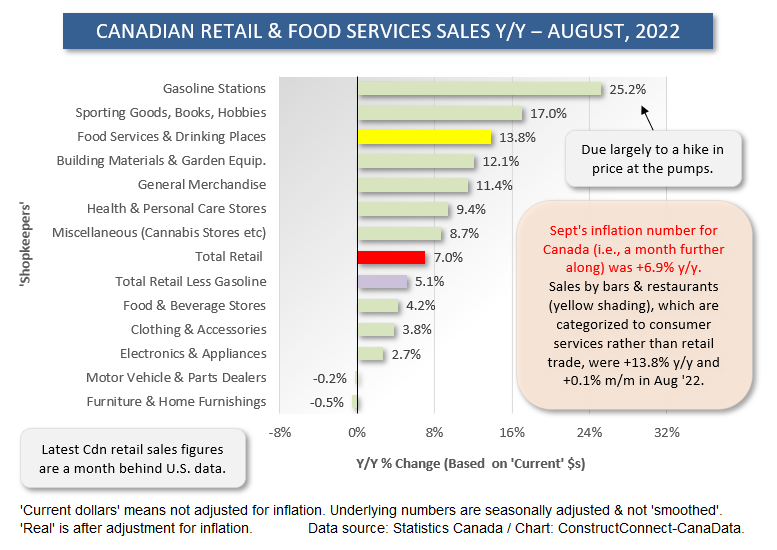 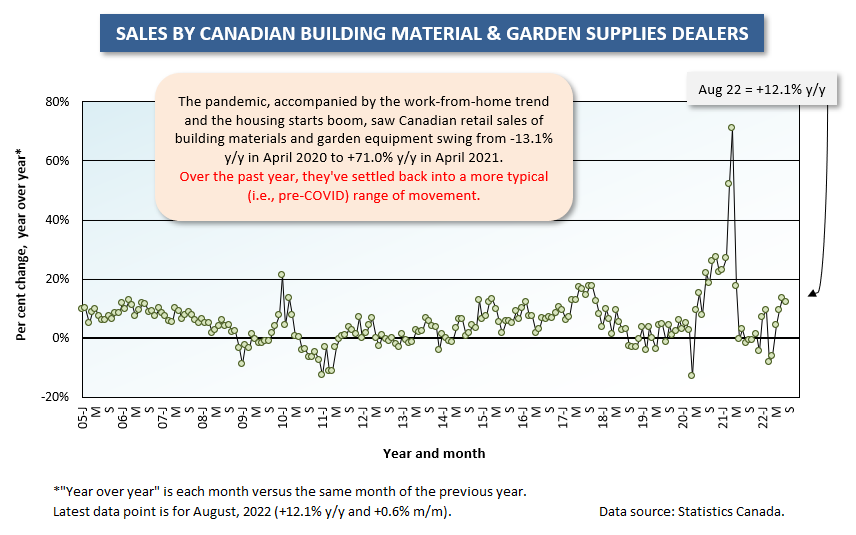