As COVID-19 vaccines roll out questions are forming around how far the government — or an employer — can go to demand workers be inoculated before they report to the jobsite.

“The elderly and vulnerable and health care workers first, obviously,” he says. “But construction workers have been working through the pandemic.”

Whether the government or an employer can made inoculation mandatory are difficult questions, says Norm Keith, of Fasken, one of Ontario’s leading lawyers in the field of occupational health and safety, because it crosses over not just into the area of workplace safety but into privacy rights and religious rights and raises the issue not of whether they can but whether they should.

“I had one client ask if they could incentivize their employees to get a vaccination,” he says. “They meant, to pay them, and I advised against it for several reasons. Not a good idea.”

The first is whether the province has the statutory authority to decree vaccinations for employees in the workplace or before being able to enter public spaces.

Lewis says the Carpenters’ are generally strongly in favour of vaccinations but would rather it be voluntary than compulsory, though there could be exceptions.

“Certain exception to vaccination in the care of allergies, pregnancy or religious reason, pending the best medical advice at the time,” he says. “If the government makes it mandatory we’d advise our members to follow the law.”

However, employers should not mandate compulsory inoculations unless there are specific reasons, he says, and they do not have that unilateral right.

“For our members it would be on a case by case basis,” he says. “If they are going into an LTC to carry out renovations — and there will be a lot of that soon — then it is reasonable to require a vaccination because that virus just doesn’t walk into those places by itself. Or, hypothetically, if you are working at a construction camp in an isolated area where an outbreak would be a disaster, a vaccination might be considered reasonable.”

In the meantime, Lewis says, the Carpenters’ have offered their facilities to the government as places to administer vaccinations in an effort to help the rapid rollout.

It stands to reason construction employers should strongly encourage their crews to get vaccinated, Keith says, because they’re burdened with the duty of taking all reasonable steps to ensure their sites are save under the OHSA and the Criminal Code.

Still, much of the anticipation around mandates and restrictions is premature, he adds, since the vaccines aren’t widely available and won’t be for sometime.

“I think employers should strongly recommend based on Health Canada approvals and the benefits,” he says noting asking an employee whether they have been inoculated isn’t going too far in terms of privacy. “A simple proof of vaccination is not disclosure of a medical test or medical record.” 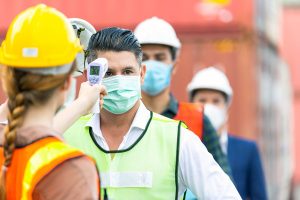 The key, he says, is to take a reasonable approach and not overreact or overreach. While workplace safety is tantamount it must be balanced against the existing laws and regulations, any collective agreement wording and the Human Rights Code and Privacy legislation.

However, while construction sites haven’t been a major source of infection, it happens. Crosslinx Transit Solutions announced in January that 28 people working on the Eglinton Crosstown LRT tested positive putting another 70 people into isolation.

Earlier, Ontario Health Minister Christine Elliott has already hinted that vaccinations may be required to enter some public spaces and a Campaign Research poll suggested more than half of 58 per cent of Canadians think people should be vaccinated while only 35 per cent didn’t support making it mandatory.

Mandatory shots aside, the next question is how far restrictions on non vaccinated people could extend and there’s already legislation which shows the authority is there in the form of the Immunization of School Pupils Act which bars children from attending school if they haven’t been inoculated against basic diseases.

However, as Zwibel, notes, there are exceptions for those who cannot tolerate vaccines for medical reasons and those who have religious or cultural objections.

Also, in 2018, she notes, the Ontario Nurses’ Association (ONA) won two decisions against the Toronto Academic Health Science Network which includes St. Michael’s Hospital, Sinai Health System, Sunnybrook Health Sciences Centre, North York General Hospital, the Centre for Addiction and Mental Health, Michael Garron Hospital and Baycrest Health Sciences. An arbitrator struck down a policy which required nurses to either take a flu vaccination or wear a mask for their entire shift backing a similar arbitration decision in 2015 against other hospitals.

Perhaps somewhat ironically in light of the current pandemic response, the arbitrators found that evidence showed that masks “do not prevent the transmission of the influenza virus.”

While there is pressure to plan ahead it’s moot because the vaccine isn’t widely available and much more information is needed.

So far, however, he says, the protocols put in place at construction sites have been effective.

“I’ve been really impressed at how they’ve kept construction worksites safe,” he says. “Looking at places like Texas and Los Angeles, we’ve done so much better.”

The CCLA’s Zwibel Agrees saying forcing people into inoculations is going to have repercussions on several levels despite the overarching goal of the public good.

“People don’t want to be pushed into something so you want to establish a public trust through a voluntary stage where many people want the vaccine,” she says.

On this episode of The Construction Record, digital media editor Warren Frey spe...

In September 2015, on what had been an otherwise ordinary workday, a roof collap...

A new research paper argues that as increasing numbers of immigrants are welcome...

Charges have been laid against two companies in the 2021 death of Patrick Poitra...

The front page 2022: when news broke, the DCN raced to deliver the details

While there were many trends and issues that made headlines time and again throu...