Last year finished off with the most deadly month Ontario’s construction sector has seen in the past five years but data reveals that overall 2020 was no worse than 2017 and not as lethal as 2018.

Statistics on construction deaths and injuries released in late January by the province’s chief prevention officer (CPO) indicate that the highest fatality figures since 2016 were in 2017 (22), 2018 (25) and 2020 (22). In the last five years, the months of March, August, November and December had the highest totals of fatalities, and commercial construction and single-home construction were the most dangerous sub-sectors, registering the highest number of fatalities.

The only month close to the death tally of seven in December 2020 in the past five years was December 2017, with five; in no other month in the period has the total surpassed three. 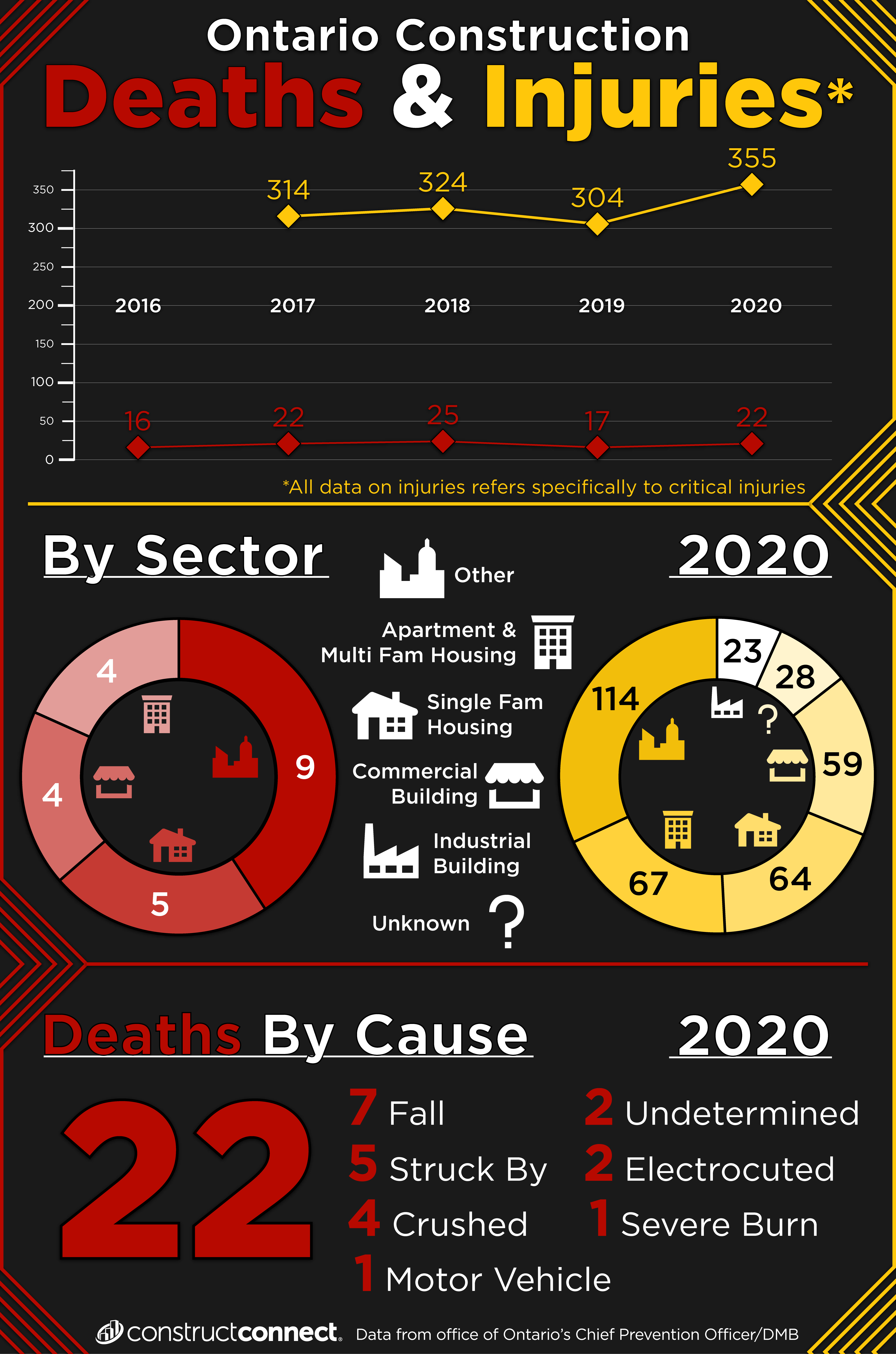 CPO Ron Kelusky acknowledged that 2020 was a “challenging year” for fatalities and critical injuries.

“Last year, 2020, was not the year that we expected in terms of fatalities and critical injuries,” he commented. “We were five more than the prior year, 22 fatalities, seven of which were falls.

“The good news is that over the past 10 years construction LTIs (lost-time injuries) collectively have declined. Last year, 2019, the construction LTI rate was 1.14, down from 1.42 10 years prior. We are awaiting the 2020 LTI rate and we are hopeful that the reduction will continue.”

In 2020, the top causes of fatalities were falls from height (seven), struck-by (five) and crushed (four). The cause of two deaths were undetermined, two workers were electrocuted, there was one severe burn death and one motor vehicle death.

In only three per cent of the deaths were the victims female. Of the 102 deaths in the past five years, 45 were the result of falls from heights.

“Last year and the year prior we’ve aggressively gone into industry,” to undertake root cause analysis, he said.

“We have enforcement data, we have claims data. What about prevention data, the epidemiological data? So, we are setting up a unit that is going to focus just on that. It’s going to be research-focused.”

His office needs to know exactly where the fatalities and injuries are happening to be able to develop further solutions, Kelusky said.

“There’s an old saying, ‘there’s probably five things that cause 80 per cent of the problems and 100 things that cause the next 20 per cent.’ We need to be able to focus on those big things that are happening and start solving those as we go forward so there will be an epidemiological focus.”

No end in sight for operating engineers’ strike

There is no end in sight for the strike by unionized operating engineers in Onta...

Plumbers, pipefitters to vote on proposed deal May 5

TORONTO — Plumbers and pipefitters in Ontario’s ICI sector will be voting on a p...

GRIMSBY, ONT. — EllisDon has announced it has achieved financial close on the We...