Skyway Community Centre taking off after years of stops and starts

The arm of a large excavator claws at the roof and walls of the Skyway Arena in Burlington. Grey cinder blocks are knocked loose and land in a dusty pile on the ground. Nearby, is a large heap of twisted metal and scrap.

Difficult to believe, but in just 18 months at the site, a sleek, new, 47,000-square-foot community centre and NHL-sized ice pad with many green and state-of-the-art features will rise in its place.

The present 48-year-old single-pad arena is being torn down and rebuilt because the building components and refrigeration equipment have reached the end of their lifecycle and upgrades are required due to environmental, accessibility and efficiency reasons.

Once demolition is complete, the contractor will begin laying footings for the new structure.

The facility, to be named the Skyway Community Centre, will be much larger and have a number of green and energy-saving features.

For starters, a large geothermal system that uses a loop of pipes buried in the ground will be used to heat and cool the structure.

Heat generated by mechanical systems and recovered from the refrigeration plant at the arena will also be used to warm the bleachers and other areas inside the facility.

“In normal arenas, they usually have these gas heaters. We’ll be heating through the concrete or heating ducts using reclaimed heat,” says Jennifer Johnson, senior project manager, facilities and buildings in the department of environment, infrastructure and community services at the City of Burlington. 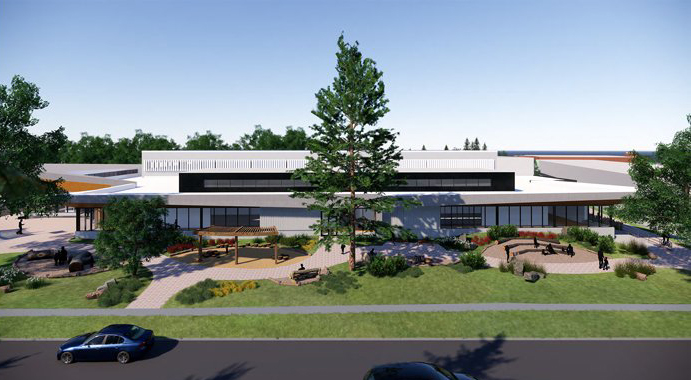 The grid of pipes for the geothermal system will be four feet under the surface of the building. Boreholes will be drilled vertically into the ground.

Mechanical equipment inside the building will also be powered by electricity — not natural gas, and a zero-emissions electric ice-resurfacer will be used instead of the typical compressed natural gas machine.

“The biggest thing is that it won’t be using any gas,” says Johnson. “We’re not even bringing gas to the site. We have a big transformer that’s on order with Burlington Hydro.”

The roof structure is being designed to support future solar panels. The city is holding off on adding the panels, though, until it’s determined what is going to be built on an adjacent lot, as it could shade the site.

“Part of the vision of the city and also our carbon reduction management plan is to reduce the tonnage of gas emissions at this building,” says Johnson.

According to the city, integration of green components will reduce annual carbon emissions by roughly 85 per cent as compared to a facility without the features, mainly because there will be no use of gas.

The new building has been specifically designed to comply with the city’s Climate Action Plan that was approved by council in April 2020 and lays out key program areas to help the community transition away from the use of fossil fuels, particularly for buildings and transportation, to become net-zero by 2050. The city had declared a climate emergency a year earlier.

The ice pad in the arena will be 85-by-200-feet and the building will have spectator seating, warm and cold viewing areas, six change rooms with showers and washrooms, a referee room, a lobby and programs rooms, multi-use program space with kitchenette and a three-lane indoor walking track.

A baseball diamond next to the building will also be renovated with a new backstop, line fence, irrigation, drainage, dugouts and player’s benches and bleachers for fans.

A natural play area for children will be built next to the structure with climbing apparatus and swings. There will be accessible pathways and passive open space around the structure, along with a parking lot.

The facility, to be opened in the second quarter of 2024, has been a long time coming.

The project originally began in 2019 but was paused due to COVID-19 and challenges with federal grants and budgets. The rink was decommissioned in 2019 and city staff were using the office space and rooms at the arena.

Johnson said the building used freon in its refrigeration system and the Ministry of Environment wanted the municipality to have it removed. The freon was removed but Burlington decided it needed a new building. Public meetings were held and, based on input, it opted for a new facility with an indoor walking track.

Johnson says the biggest challenge of the project has been keeping it on budget because the rebuild was proposed several years ago and due to supply chain and other pressures the construction landscape has changed.

“Prior to it going out to tender we sat down with the consultants, especially on electrical and mechanical, to ensure that what they were speccing as part of the design was readily available,” she says. “I think we’ve done a good job sourcing as much as we can local.”

Appetite for risk has changed for P3s, with proponents less hungry

With new procurement models being used increasingly across the country, some of...

Mexico pledges to complete huge elevated train in one year

The future of office space: ‘We will forever need spaces to collaborate’

Does the hybrid workplace represent the new status quo and, if so, how does that...

The Canadian Union of Public Employees (CUPE) is calling on the federal governme...

Skyway Community Centre taking off after years of stops and starts

The arm of a large excavator claws at the roof and walls of the Skyway Arena in...

As the Daily Commercial News (DCN) counts down to its 95th anniversary o...

What are the actual benefits of using exoskeletons in construction?

Researchers at the Canadian Institute for Safety, Wellness and Performance (CISW...

A small army of construction workers will descend on Canadian Forces Base (CFB)...