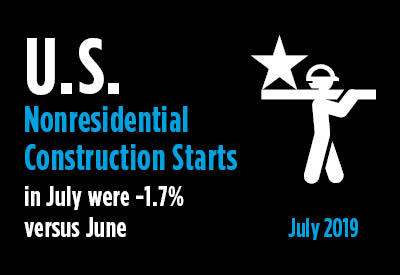 The month-to-month change versus June was -1.7%. July’s basket of mega projects, however, was a little better than June’s. July included 4 projects of more than $1 billion each for a total of $8.7 billion. June had 3 such projects for $7.1 billion. July featured ultra-large LNG terminal, refinery, hospital and airport work (see Top 10 Project Starts in the U.S. – July 2019).

On a year-over-year basis, July 2019’s nonresidential starts appear upbeat, +6.9%. They were also ahead by more than one-quarter (+29%) versus their previous five-year average for July from 2014 through 2018. On a year-to-date basis, nonresidential starts so far in 2019 have been -3.2% compared with the same January-to-July time frame of 2018. 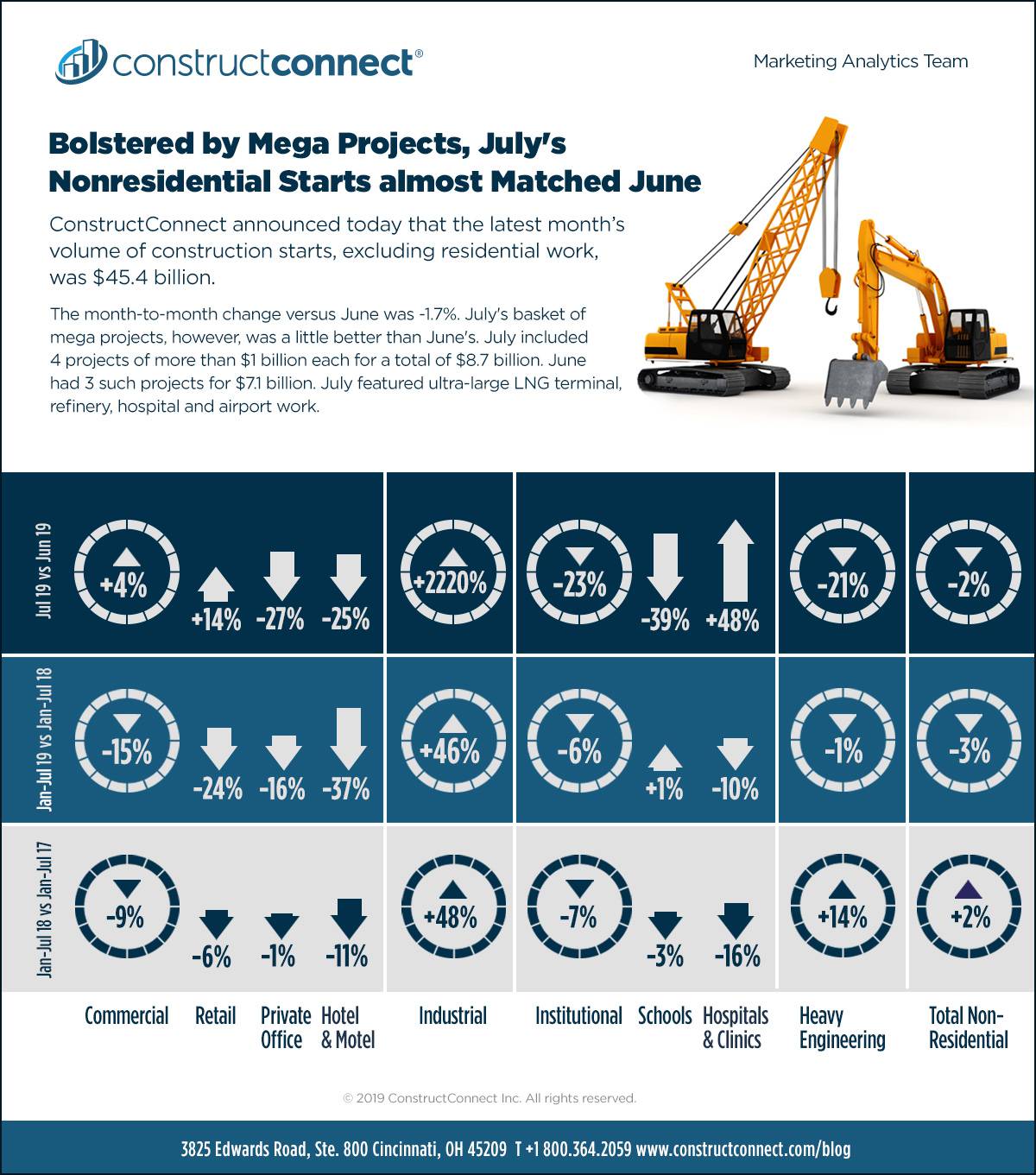 Employment in the U.S. construction sector in July moved a shade higher (+4,000 jobs) than in May. The average monthly gain in ‘hard hat’ jobs to date in 2019 has been exactly half what it was through the first seven months of last year, +15,000 down from +30,000. The year-over-year change in construction employment has been +2.8%, nearly twice as fast as for all jobs in the economy, at +1.5%. Construction is still leading all sectors in year-over-year hiring, but only by a thread. ‘Transportation and warehousing’ is at +2.7% and ‘education and health’, +2.6%.

July’s year-over-year employment changes in other corners of the economy with close ties to construction were: ‘machinery and equipment rental’, +11.7%; ‘oil and gas extraction’, +7.6%; ‘architectural and engineering services’, +3.0%; ‘real estate firms’, +2.8%; ‘cement and concrete product manufacturing’, +0.6%; and ‘building material and supplies dealers’, -0.5%.

EDMONTON, ALTA. – The first buses have departed from the new Kathleen Andrews Tr...

Work continues for the Mirvish Village mixed-use development at Bathurst and Blo...

The Residential and Civil Construction Alliance of Ontario (RCCAO) would like to...

Thousands of Canadian veterans are homeless or without stable housing. Homes for...

Following a contraction in 2018, total construction starts in the US grew by 4....

EDMONTON, ALTA. – The first buses have departed from the new Kathleen Andrews Tr...

Work continues for the Mirvish Village mixed-use development at Bathurst and Blo...

The Residential and Civil Construction Alliance of Ontario (RCCAO) would like to...

Industry Perspectives: Powerline technician — a trade for the adventurous

Electricity is essential in our everyday lives and has now become a commodity. ...