On top of the 82,000 net new jobs that were created in Canada in August, another +53,000 were added in September, according to the latest Labour Force Survey report published by Statistics Canada. The total for the past two months, therefore, has been +135,000, a remarkably strong advance. 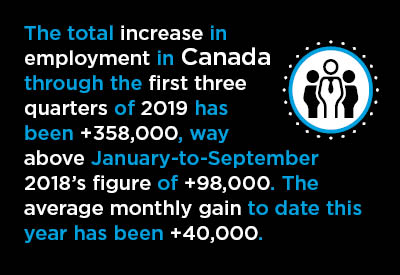 Canada’s seasonally adjusted (SA) unemployment rate in September tightened another couple of notches to 5.5% from 5.7% in August. It was also down from September 2018’s 5.8%.

On a not seasonally adjusted (NSA) basis and adopting the same calculation methodology as in the U.S., Canada’s jobless rate in September was only 4.1%, its lowest reading this century. Also, the 4.1% figure for Canada was not greatly different from the 3.3% NSA level recorded in the U.S.

Canadian full-time employment in September was +70,000 jobs, which was partly offset by a contraction in part-time work, -16,000. Full-time work is more welcome, though, because it is usually higher-paying and more secure.

Public sector employment in the latest month was +32,000, which was a little better than the jobs lift offered by the private sector, +21,000. The private sector jump was entirely due to a pick-up in ‘self-employed’ endeavors.

Among industrial sectors, the jobs improvement was most evident in ‘health care and social assistance’ (+30,000) and ‘accommodation and food services’ (+23,000). ‘Information, culture and recreation’ cut staffing in a big way (-37,000).

While manufacturing added only +2,000 jobs in September, construction undertook a bit more hiring, at +10,000. For both manufacturing and construction in Canada, however, the monthly average improvements so far this year have been less than eye-popping, +1,000 and +3,000 respectively.

Nevertheless, as set out in Table 1, the y/y Canadian employment pickups in manufacturing and construction are currently beating U.S. results.

Ontario has been a jobs-making machine. It’s been the juggernaut among the provinces.

Ontario’s year-over-year jobs increase has been +3.5%, which is nearly one-and-a-half times the rate for the entire country (+2.4%).

Quebec, with a change of +3.1%, has also been a significant jobs generator over the past year.

Furthermore, Quebec is now tied with British Columbia for lowest unemployment rate among all the provinces, both at 4.8%. Manitoba is only a minor step back with a jobless figure of 5.0%.

Table 2 shows wage increases weekly and hourly Canada-wide to be +3.8% and +4.3% respectively. The highest number in the table is +4.6% for non-union workers hourly.

Employees in the U.S. have been seeing pay cheque increases that have generally been about one percentage point below Canadian results.

Window installation is nearing the top floor of CIBC Square at 81 Bay St. in Tor...

ANCHORAGE, ALASKA — An Alaska company has completed construction of the first ov...