U.S. country-wide construction starts in 2019 had a greater than normal weighting of ‘mega’ projects. ‘Megas’ are projects valued at $1.0 billion or more each. 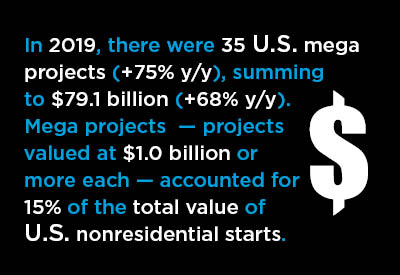 In 2019, mega projects accounted for 15% of the total value of U.S. nonresidential starts.

In the three tables which follow, all 35 U.S. mega projects are set out according to the region of the country where their groundbreakings occurred.

The breakdown by number of projects had the South in the lead with 16, followed by the West with 8 and the Midwest with 7. The Northeast recorded only 4 such projects.

In the Midwest, the total value of the region’s seven mega project start-ups, at $10.2 billion, was 12.9% of the U.S. total. Michigan accounted for three of the seven and Illinois contributed two.

Among mega projects in the NE and MW, there was a big transportation component, with groundbreakings on rail, rapid transit and airport work. Also noteworthy were large car plant, sports arena and electric power plant projects.

The Northeast and Midwest in combination contributed one-fifth towards the total value of U.S. mega projects last year.

The South was the nation’s standard bearer for mega projects in 2019. Its $47.5 billion worth of work was 60.0%, or three-fifths, of the country-wide total.

Two other states managed multiple entries in the South’s 2019 mega projects listing, Georgia with three and Alabama with two.

Alabama’s ‘megas’ were both in the auto sector ‒ the Toyota/Mazda joint venture and a battery plant for Mercedes-Benz.

Other mega projects in the South included an LNG facility in Louisiana, an Amazon air distribution center in Kentucky and railroad work in Florida.

Washington and Wyoming Led the West for Mega Projects in 2019

The West accounted for the final one-fifth (19.4%) of the U.S. total dollar volume of mega project starts last year.

Washington with three projects and Wyoming with two figured prominently in the West’s mega projects inventory. Washington was home to rapid transit work and a Microsoft headquarters expansion. Wyoming featured a wind power station and a crude oil pipeline.

Elsewhere in the West, Arizona could boast of a light rail extension; Nevada of a new casino project; and Colorado of an Amazon fulfilment center.

Notably missing from the catalogue of jurisdictions in the West with mega projects last year was the large-population and large-economy state of California.

In Canada, where ‘mega’ project groundbreakings are traditionally a big part of the annual construction scene, they were mainly absent in 2019. There were only four such projects, although two of them were quite out-sized. The total value of the four projects was $16.7 billion.

The two biggest mega projects were both pipelines located in Western Canada: TransMountain (oil) for $7.4 billion and Coastal GasLink (natural gas) for $6.2 billion.

Furthermore, all four mega project initiations occurred in the second half of the year. 2019’s first half was silent on the mega project front.

In 2018, there had been eight mega project start-ups in Canada for a total value of $31.4 billion.

In 2018, Canada’s mega project total of $31.4 billion relative to the U.S. total of $47.2 billion was impressive. The favorable comparison is dialed back a little, however, when the currency exchange rate is considered. The $31.4 billion for north of the border was in lower-valued Canadian dollars.

Part one of Cracks in the Foundation: Mental Health, Substance Use and C...

Part one of Cracks in the Foundation: Mental Health, Substance Use and C...

Procurement Perspectives: Concerns with the controversial nature of public construction

No study of construction in the government context would be complete without som...

Work continues for The United BLDG. mixed-use development on University Avenue i...

VICTORIA — Dozens of active transportation projects that support Indigenous and...