The two items at the top of the economic news during the final week of October and the first week of November were the Bank of Canada’s Policy Rate Announcement, with accompanying Monetary Policy Report, and the October Labour Force Survey, released by Statistics Canada. After seeing double-digit year-over-year price increases in food (+10.3%) and energy (+14.0%), many who closely follow monetary policy in Canada expected the Bank to hike its target for the overnight rate by 0.75% on the 26th of last month. Needless to say, they were surprised when the Bank moved its policy rate up by just 0.50%.

Third, all ten provinces saw more jobs in October, led by Ontario (+43,000) and Quebec (+28,000).  In a recent speech, Bank of Canada Governor Tiff Macklin noted that the labour market had started to ease in recent months. However, the surge in October suggests this slowing in jobs creation paused early in the fourth quarter despite the tightening of monetary policy over the past eight months.

Despite the jump in employment, the effects of high inflation eroded consumer confidence in October. The Conference Board in Canada’s Index of Consumer Confidence fell by 4.7 points in the month to its lowest value since March 2020.  The percentage of households with a pessimistic view of their current finances reached 35%, up 2.1% from the previous month.

In the short term (i.e., the next month or two) the very strong uptick in October full-time employment should, at least temporarily, help reduce the depressing impacts of higher interest rates and the eroding effects of strong inflation on consumer spending, particularly on services. This implies that holiday spending will be somewhat better this year than it otherwise would have been.

Shift from part-time to full-time hiring

Over the past six months, the Canadian economy has replaced 110,000 part-time jobs with 169,000 full-time ones. This replacement of part-time with full-time jobs (see accompanying chart) indicates a further shrinking of the output gap – and that the economy was operating closer to full capacity in the third quarter than it was in the second. It further highlights how much momentum Canada’s labour market has as it approaches the new year.

The strong hiring has occurred against a background of rising interest rates which, to date, have had limited success in bringing Canada’s inflation rate back to the Bank of Canada’s 1% to 3% target range. Furthermore, the near-record performance of national housing starts in September indicates that, to date, higher interest rates have not stalled new residential construction.

In a recent speech to the Public Policy Forum in Toronto, Bank of Canada Governor Tiff Macklem stated that the Bank will be watching “a broad set of indicators to gauge the health of the labour market and how it is adjusting to tighter monetary policy”.  He noted that while an increase in the labour supply raises the economy’s growth potential, it also creates new demand and adds to spending. Hence, it is not a substitute for tighter monetary policy.

Based on the October hiring stats, the labour market’s pulse has not missed too many beats and it appears to need a stronger dose of anti-inflation medicine, in the form of higher interest rates, to slow it down.  Consistent with what we indicated in Snapshop #18, we continue to expect the Bank to hike interest rates into the range of 4.50% to 5.00% in the first half of next year. 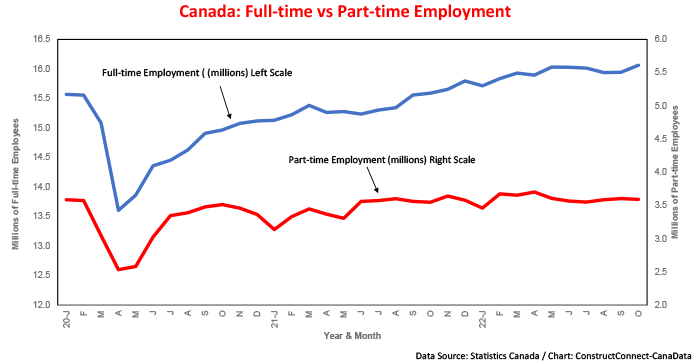 The two areas of concern with non-standard bids are related to joint bids and al...