Engineering work has started for the initial stage of the massive $4-billion Lake Diefenbaker Irrigation Expansion mega-project, the largest infrastructure venture ever undertaken in the history of Saskatchewan.

The project will take about a decade to complete and eventually double the amount of irrigable land in the province.

Clifton Associates Ltd. has been selected to complete overall engineering preliminary designs for phases one and two of the three-stage project that will add 460,000 acres of irrigable land to the province.

The engineering work is expected to take up to 18 months and will determine how the phases of work will proceed on the project.

“It’s a very large project and will go for over a decade or more, so it will have a very substantial long-term impact on not only the agri-food economy but also the engineering and construction economy as well,” says company CEO Wayne Clifton. “Part of what we are doing right now is assessing those old works we’re calling the legacy works and seeing to what degree those assets can be incorporated into the larger scheme.”

Clifton’s team will be doing the preliminary design for the first two phases. The work will include geotechnical, soil suitability and geographical mapping, and environmental consulting services. The firm will also play a central role in extensive consultations with First Nations and other stakeholders. 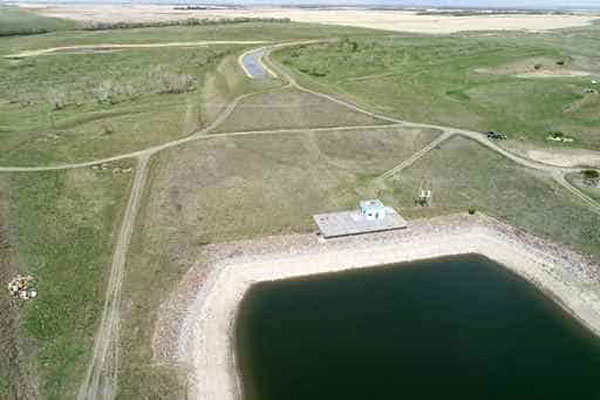 Engineers will review the environmental scope of the work required to complete the initial stages of the necessary provincial and federal regulatory approvals and permits. There will be careful assessment of potential impacts to environmental protection, downstream users, and communities, including consultations with First Nations and other stakeholders as part of the process.

“The engineering work has started and the first phase of that is going to take about a year,” says Clifton. “It will be the work that supports the market analysis and the investment decisions that need to be made on construction.”

“We are delighted to be a part of this legacy project that will further reinforce Saskatchewan’s position as a leader in global food security while building on the vision made possible by the creation of Lake Diefenbaker a half a century ago,” Clifton states. “We look forward to continuing the tradition of prairie innovation – applying Saskatchewan talent to deliver a legacy project for the people of Saskatchewan.”

The first phase of the project will cost about $500 million and include rehabilitation and expansion of the existing Westside irrigation canal system, which will increase irrigable land in Saskatchewan by 80,000 acres.

The second phase will see further expansion and buildout of the canal system, adding another 260,000 acres of irrigable land. Part of Clifton’s job is to identify where the canal will go and whether reservoirs are needed.

The third phase will see the buildout of the Qu’Appelle South Water Conveyance Project, adding an estimated 120,000 acres of irrigable land on the east side of the lake.

The second and third phases of the project are estimated to cost up to $3.5 billion.

The generational project will entail moving millions of tonnes of earth to expand the existing canal system. It will create up to 2,500 jobs per year during the 10-year construction phase, according to the province.

The venture, which fulfills the vision of former Prime Minister John Diefenbaker, will allow farmers in west-central and southern Saskatchewan to grow more and different, higher-value crops, such as beets, lettuce and potatoes.

The province states it will lead to an estimated $35.5-to-$83-billion increase in the province’s GDP over the next 50 years and $20 billion in tax revenues to support public services, including health, education and social services.

The project is necessary because only about 100,000 of the more than half a million acres suitable for irrigation from Diefenbaker Lake has been developed. With climate change and the annual temperature going up a degree a decade, large amounts of the semi-arid land may become non-farmable.

The project was first announced in July 2020 by Premier Scott Moe and is a significant step to completing goals set out in the 2030 Growth Plan. The federal government has thrown its support behind project.

Clifton says the project is interesting because it is aimed at increasing food production in Saskatchewan, but in designing the system, engineers must also meet the needs of the communities and environmental conditions.

He says the project will have its challenges, namely integrating the concerns of residents in the area and mediating their interests.

“Any major project will have challenges, that’s why we’re in this business,” he says. “Other people’s projects and problems are our living, I guess.”

What’s the deal with megaproject delays and cost overruns?

Engineering work has started for the initial stage of the massive $4-billion Lak...

Engagement with Canadian First Nations has been a long and winding road that tak...

Apple AirTags save Calgary contractor thousands after theft of materials

Your top JOC headlines this week cover news Keyera and CN are examining the poss...

CALGARY, ALTA. – The City of Calgary is seeking proposals until September from d...

WINNIPEG – Three levels of government have announced a joint investment of over...