Industry Perspectives: Powerline technician — a trade for the adventurous

Electricity is essential in our everyday lives and has now become a commodity.  In our homes and places of business, electrical power is so mainstay that we rarely even think about it, let alone how it gets to us.   It is used to provide our basic needs, heat and cool our dwellings, power our stoves, fridges, washers and dryers, heat our water and keep our lights on.  It charges our cars, powers computers, entertainment devices and every other technological device that we deem essential in our digital world of global connectivity.  But how much do we understand when it comes to knowing the path electricity takes to get to the end user?

It is fair to say that if asked, the general population would know what an Electrician does.  Most should be able to describe the trade in general terms.  Electricians work on power systems; install, service, and repair “all things electrical” in our homes and offices that are downstream of the Hydro supply transformer.  However, it is the other side of the power supply chain that few know anything about.  This is where the Power Line Technician (PLT) lives his/her life. 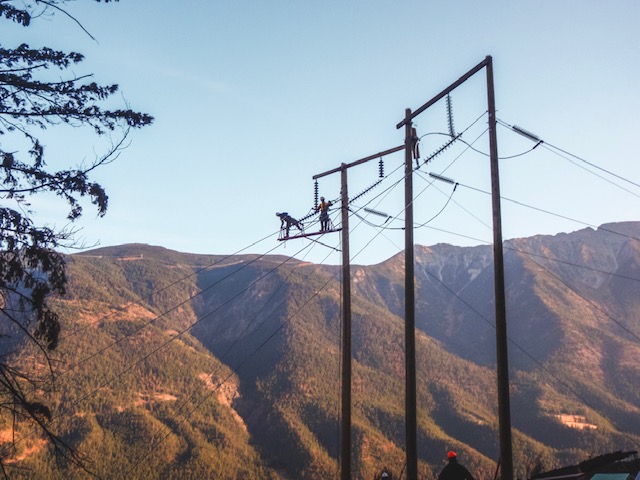 PLTs within the industry are referred to as “Linemen”.  The work they perform is extremely demanding.  Yet, for those who thrive in the outdoors and enjoy “construction adventure” there is no life like it.  Unlike the electrical trade, the number of tradespeople working in the PLT field are smaller in number.  Generally, a person beginning in this trade will start as an apprentice, complete all levels of schooling, fulfill the required work place hours, and successfully pass the Red Seal exam on their way to becoming a journeyperson and holder of the coveted Certificate of Qualification – Power Line Technician. 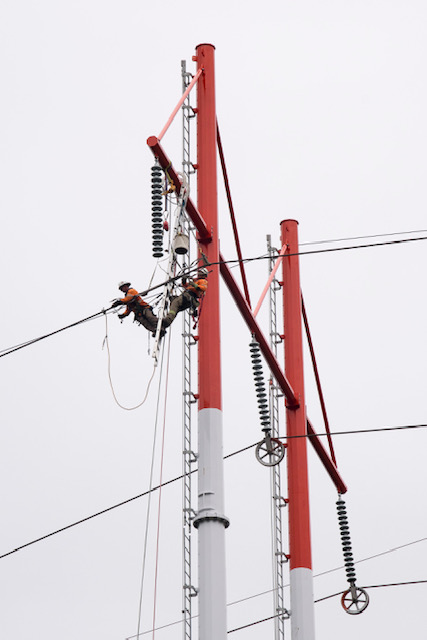 While we may think of a Lineman as a person who climbs poles to fix wires, times have changed.  The Lineman still does don his/her belt and spurs to climb an occasional pole but most of this high work is now achieved through the use of a bucket truck.  The trade is physically demanding and safety is absolutely paramount.  Linemen are often required to perform work on “live lines” as it can be too costly or in some cases impossible to completely shut down an entire power feed to a community or large industrial customer.  If “live” work is not performed in accordance to the strictest safety procedures that have been developed, then this type of work can be deadly.

In British Columbia, PLTs largely perform work on the BC Hydro system.  With more than 18,000 kms of line connecting the Province to the Hydro grid, 100,000 wooden poles, 22,000 steel towers and 292 sub-stations, the variation of work that a Lineman performs is vast.  With line voltages ranging from 69kV to 500kV, the PLT must be a person who always “thinks safety first”.

As a population we have become more dependant than ever before upon electricity.  Yet, when winter storms, wind, rain, and snow hit our province hard and our power is interrupted, the impact on our systems and services are immense.  It is in these conditions that PLTs are called into action to restore power – often in the most adverse geographical locations should towers or lines come down in remote mountainous areas.  However, this is what Linemen are trained to do.  Install, repair, restore, and service all power systems across the province in any type of weather conditions.

Today, the helicopter has become a key part of the PLTs arsenal.  Helicopters are used to set towers on foundations where roads do not exist, string cable, move equipment to remote sites, and transport workers.  Yet, an area where the helicopter has played a large role is setting Linemen onto live lines where they can now do “live” work.  The helicopter hovers carefully and precisely above the energized live line while lowering the Lineman who is dressed in a Faraday suit onto the energized line.  Once on the line, the full 500kV force is flowing through the line uninterrupted while the Faraday suit protects the Lineman from electrical harm.  This work is only possible because the Lineman is not grounded and becomes part of the electrical pathway.

While work in this trade is dangerous it is full of adventure and continuously exciting.  Being able to work in changing climates, various regions and different situations brings a level of exhilaration and satisfaction that very few careers can offer.  Those in the trade seldom leave the trade as the work provides a level of satisfaction that continues to drive their passion.  The PLT line-trade certainly provides an adventure.

Ryan Lucas is vice-president with Allteck Limited Partnership Group.   Based in the Vancouver office, Ryan is a Red Seal Power Line Technician who has worked in all aspects of the trade around the globe.  Ryan is the host of Powerline Podcast.

Great article – what an interesting trade. I know when I began my pipeline welding career I was told “Be a Welder and see the world”. That was so true. Trades offer so much.

With a PLT son – who has been active from coast to coast – it is a whole lot easier to understand just how important these individuals are to the Canadian economy, and how much they are taken for granted by most of us. Thanks to all of you who risk your lives in order to keep us comfortable.

The Mechanical Contractors Association of Canada has written to Prime Minister J...

The Mechanical Contractors Association of Canada has written to Prime Minister J...

Due to its complexity, much of the subject matter concerning the economy requir...

TORONTO — A hospital in Burlington, Ont., is building a temporary COVID-19 unit...