Edmonton’s Blatchford development to be a leader in sustainability

At 536 acres, Edmonton’s former City Centre Airport lands are being transformed into one of the world’s biggest sustainable mixed-use communities that will house nearly 30,000 residents, states a City of Edmonton report.

Located in the north central area of the city, the land, which will be coined Blatchford, is bordered by Yellowhead Trail to the north, Kingsway Avenue and Airport Road to the southwest, 109 Street to the east and 121 Street to the west.

Blatchford development plans have been driven by three core principles: to protect the environment and make use of technologies that provide sustainable solutions for renewable energy; to minimize the regional footprint; and to create an inclusive and healthy community.

As a way to reduce the environmental footprint, former airport hangars have been deconstructed as opposed to demolished.

According to the project website, the buildings were dismantled in order to sort the materials for recycling, reuse or waste management. In the first two stages of deconstruction, approximately 92 per cent of building materials were recycled or reused.

As for the former airport runways, the concrete, asphalt and gravel is being used to construct new roads within the community and excess materials will be sold for reuse.

Envisioned as a carbon neutral community using 100 per cent renewable energy, the Blatchford development will include two residential areas on the east and west sides, a town centre, an 80-acre central park and a civic plaza connecting all the neighbourhoods together. The development will also utilize a centralized District Energy Sharing System (DESS), otherwise described as an onsite low carbon energy system that will provide energy for heating, cooling and domestic hot water. The DESS will consist of a geoexchange field system that essentially makes use of shallow geothermal energy from the ground for heating and cooling, explains Christian Felske, the director of renewable energy systems for Blatchford.

Construction of the geoexchange field underneath the first storm pond is underway, explains Felske, as there are 570 boreholes to be drilled, each nearly 150 metres deep. The DESS is designed to not only allow for the sharing of energy between buildings by taking excess heat from one and distributing it among the others but it can also capture and store heat in the summer for use during the winter, Felske says.

A number of ambient energy centres will be built across the development area which will essentially house the equipment required for the system to operate.

Construction of the first energy centre is also underway, facilitating the development of the first set of homes in west Blatchford in 2019.

For the first stage of development, between six to 10 parcels of land close to Airport Road will be serviced and made available for purchase and development of 250 units within the west Blatchford area, according to development manager Tom Lumsden.

At full development, a total of 6,000 units are expected to be built in west Blatchford.

The City of Edmonton is currently undertaking a formal request for proposals process with hopes to announce prospective builders by fall 2018. Some site work could take place before the winter season, adds Lumsden.

Blatchford east will potentially provide another 4,000 residential units once developed. This will be the closest area to two LRT stations the city is planning to build.
All homes in Blatchford will be designed to be energy efficient and are expected to exceed requirements of the new Alberta Building Code.

Three designated school sites will be located within the northeast area of Blatchford and with the Northern Alberta Institute of Technology located to the east, the district may possibly see additional educational builds in the future, the city adds.

The city has been actively seeking interest for retail and commercial partnership opportunities within Blatchford, explains Lumsden.

While the community is designed to accommodate all types of transportation, priority has been given to pedestrians and walkability. The streetscapes feature separated bike lanes, wide boulevards and mid-block cross points as well as minimal surface parking, says Lumsden.

The community is being named after former mayor Kenneth Blatchford. 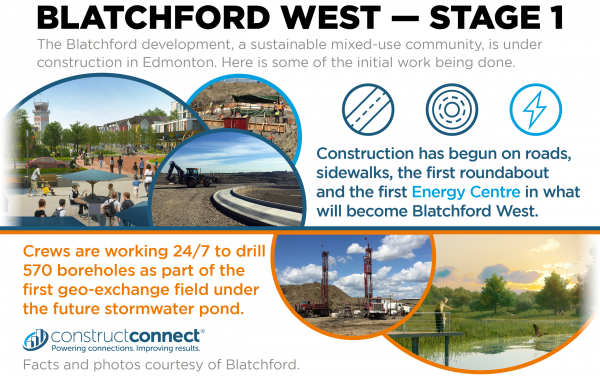 Your top JOC headlines this week cover the business case for the controversial R...

Addressing Canada’s housing crisis through programs such as the federal governme...

When the City of Edmonton's new $153.4 Coronation Park and Recreation Centre beg...

The City of Winnipeg is looking to expand its legal action against builders who...

When the City of Edmonton's new $153.4 Coronation Park and Recreation Centre beg...

CALGARY, ALTA. - The city of Calgary has recruited citizens from the commercial...