One of Vancouver’s busiest corridors is in for a major transformation, one step at a time.

The Broadway Plan is a 30-year framework approved by Vancouver City Council intended to integrate new housing, business spaces and amenities with the Broadway Subway currently under construction.

The plan spans an area of approximately 500 city blocks ranging from Clark Drive in East Vancouver to Vine Street in the west and is centred around an expansion of the existing rapid transit system further west along the West Broadway corridor, one of the busiest areas of traffic in Canada. 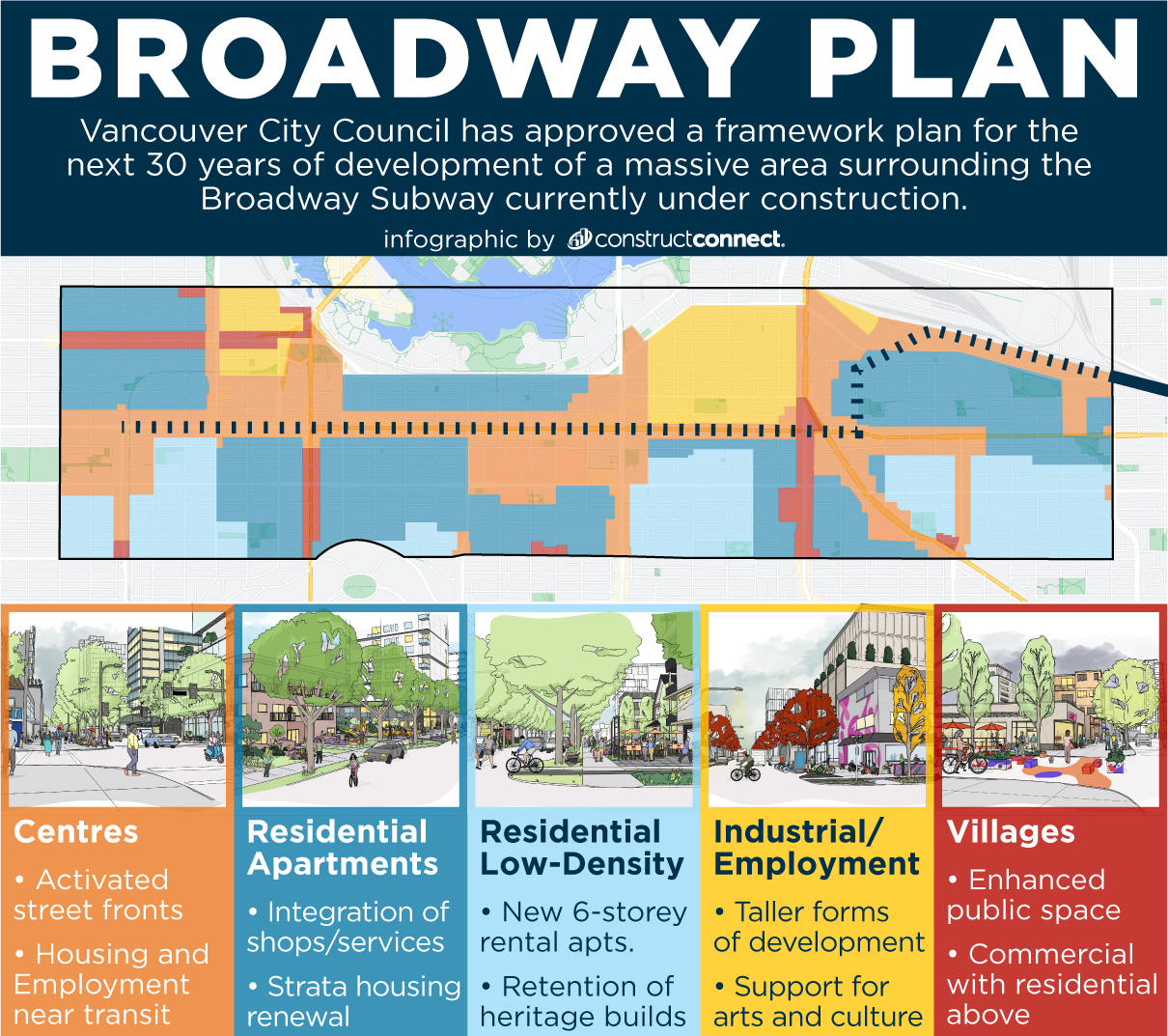 Housing affordability is an ever-present concern in Vancouver, and City of Vancouver director of special projects Matt Shillito said housing supply is key to the Broadway Plan with an emphasis on rental.

“It’s introducing a significant amount of more supply of housing of all kinds, all tenures and all forms of housing but with a particular focus on rental and affordable housing. About two thirds of the plan will be rental,” Shillito said.

“We’re estimating around 30,000 new homes will be built over the next 30 years through the plan, and that supply is really crucial because we know that we have high and rising prices for the sale of homes and we also have very low rental vacancy rates. The first thing we need to do is to increase the supply and help address that,” he added.

Within the area covered by the Broadway Plan there is already a large supply of older relatively affordable housing stock, he noted, primarily in the form of three and four-storey walkup apartments built in the 1950s and 1960s that should be protected as the area changes around them.

“The plan looks to focus development away from those areas and into the other areas around the stations and along the main streets, and thereby only allow incremental development of that rental stock over the long-term,” he said. “The tenants of those homes also need to be looked after as those buildings do age and as they redevelop.”

Shillito added the city has implemented tenant protections to ensure once older buildings are developed, those tenants can return to the buildings at rents that at or below what they currently pay.

Previous
Next
Sustainability is another goal of the Broadway Plan, ranging from reducing embodied and operating emissions in buildings to encouraging cycling, pedestrian traffic and rapid transit to “get people out of their cars,” he added.

Skytrain stations will also function as “centres,” he said, which is “two blocks immediately around the stations within a few minutes walk of the station and also along the main streets, Broadway itself, but also can be Main Street Kingsway, Broad and Arbutus (Skytrain stations), where we are looking to put the most density.

“That’s (intended) to support transit ridership and also avoid development pressure in some of the existing apartment areas where we want to allow that to happen incrementally. The highest densities and the tallest buildings are all within a very short walk of the new stations,” Shillito said.

The Broadway Plan is wide-ranging and logistically challenging and Shillito said the timing of construction and redevelopment is contingent on the ongoing construction of the Broadway Skytrain due for completion in 2025.

“It’s partly timing and partly in our engineering department working with the subway builders and with the developers to co-ordinate those things. We’ll have to hold back development under the plan, in some cases, until that subway construction is complete.”

The first steps of the 30-year plan begin in September 2022, Shillito said, when the city begins to receive rezoning applications from applicants.

“Considering those (applications), reviewing them and reporting them to council is one major element of the implementation, but we are also going to look at the existing zoning and potentially make changes to some of it to enable some of the plan goals. We have a whole series of large sites in the plan area, eight large sites, all of which need to be master planned and brought through a major projects process and rezonings,” Shillito said.

Further information on the Broadway Plan is available online.

CAMPBELL RIVER, B.C. — The Wei Wai Kum First Nation and the Province of B.C. hav...

CAMPBELL RIVER, B.C. — The Wei Wai Kum First Nation and the Province of B.C. hav...