U.S. Construction at a Crossroads

ConstructConnect’s grand total construction starts statistics two-thirds of the way through 2019 are almost even with January-August 2018, -3.3%. The composition of starts this year, however, has undergone a dramatic change. It is much more heavily weighted towards very large projects, the so-called ‘mega projects’ of one billion dollars or more each. 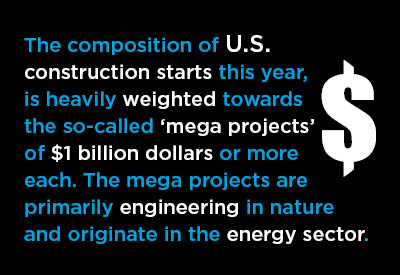 The mega projects are primarily engineering in nature and originate in the energy sector. Leaving aside the super-big jobs, the market for medium- and smaller-sized construction projects to date this year has contracted by 15%. Builders in the residential and non-residential building spaces have experienced a leveling in their opportunities.

The ‘billings index’ (ABI) of the American Institute of Architects has also signaled a slight turning down of the volume. The ABI has drifted below a figure of 50.0 in three months this year, indicating a weakening in the demand for design services.

The following discusses the major factors that will be exerting influences on U.S. construction activity moving forward into the next several years.

Population count alterations and changes in the nation’s age structure have wide-sweeping impacts on construction activity. Historically, strong gains in population have driven surges of homebuilding and the need for institutional and civil infrastructure, including schools, fire halls, roads, bridges, and sewers and watermains.

In relative terms, U.S. population growth at present has slowed to a crawl. At +0.6% per year, it’s the slowest rate of increase in 80 years. The number of births each year has been down of late and the fertility rate among women has dropped far below the ‘replacement’ rate. The net of births minus deaths can’t keep the population level steady without a significant input from immigration.

Inflows of individuals from outside the country, whether as legal or illegal immigrants or refugees, has proven to be a hot-button political issue and numbers are being curtailed.

Citizens born between the mid-1940s and the mid-1960s are known as the baby boom generation and by 2020, if still alive, they will be aged 55-plus. An aging population will increasingly place demands on the health care system. The continuing debate over the future of Obamacare means that hospital owners aren’t sure about the sources of their funding. Will the money come from private or public health care plans? Investment decisions are being held hostage by the uncertainty.

There is an assured growing need for seniors’ homes and for smaller acute care medical clinics, often owned by partnerships of physicians, that will take care of such procedures as cataract surgeries and hip and knee replacements.

Further concerning demographics, America used to be a nation on the move. In the 1950s, more than 20% of the population packed up and relocated per annum, most often to find a new job or as a corollary of rising through the ranks with a corporation. The annual mobility rate has now dropped to 10%, taking some of the sizzle out of residential real estate.

The record-low unemployment rate in the U.S. has taken a bite out of university and college enrolments. Extra years of study are no longer as appealing when good jobs are plentiful.

Sequential jobs improvements, with accompanying earnings advances, have been amazing in recent years. They’ve facilitated the climbing expenditure on consumer products that has been the mainstay of strong GDP results.

Nevertheless, there are some caveats. The fastest growing segment, by far, of retail sales has originated with Internet platforms and electronic auctions. This is disappointing for the construction industry, since it means less need for ‘bricks and mortar’ selling space. Moreover, highly-publicized closures of retail outlets present a problem with a long shelf life, an overhang of empty square footage that will need to be re-leased before badly-burned shopkeepers will give much thought to building new again.

Web-based sales, though, including an explosion in offerings of homeowner convenience services, such as meal deliveries, has meant a take-off in fulfilment center construction. Distribution centers are otherwise known as warehouses, although these days they’re filled with a lot more robotics.

Robust as the economy overall has been, the manufacturing sector has not reaped commensurate rewards. Many of the consumer products that are being purchased are imports, giving rise to conflicts between the U.S. and other nations over foreign trade, culminating in the yet-to-be-resolved tariff war with China.

Plant usage rates in most sub-sectors of manufacturing remain low, less than 80%, implying that enthusiasm for expanded footprints will stay muted for a while.

For example, paper production investments have become less necessary with the move to online versus flyer-based advertising and communications now primarily occurring through e-mail, instant messaging and social media as opposed to stationery. Bank branches and brokerage offices are being supplanted by the likes of PayPal and e-trading. Visual and audio entertainment is being delivered through downloads and streaming, challenging attendance at cinemas and other venues ‒ although a new golden age of production has spurred on studio construction in certain cities (e.g., Atlanta and Toronto).

Hotel/motel construction is presently coming off peak years in 2016 and 2017. There’s a boom in tourism worldwide brought on by a great leap forward from subsistence living to middle-class status by many of the residents of emerging nations; and due to such other factors as airline and cruise ship companies offering attractive and affordable travel packages. Communication with new friends on Facebook and Twitter has also been inspiring thoughts of distant places.

The sharing economy, as exemplified by Airbnb, rather than taking away from hotel/motel occupancy, has instead contributed to an expansion of the rental accommodation marketplace.

Jobs growth among traditional occupations in the economy is proceeding at a healthy but not unprecedented pace. Where employment gains are most torrid, however, are in the digital realms of software and computer systems development. High-tech jobs are largely office jobs, ensuring that tower construction in urban centers with the best young talent will continue to proceed nicely.

Where the potential for a boom in construction activity in the U.S. most clearly resides is in mega projects.

There isn’t a major international airport in America that doesn’t have a multi-billion-dollar expansion program on the drawing boards.

Many major cities have new and additional rapid transit lines underway or proposed. Also, railroad tracks are being laid for intercity ‘bullet’ trains.

A final point worth noting is that future major mining development will be shifting in favor of the metals and minerals (e.g., lithium and cobalt for use in electric batteries) most compatible with clean and sustainable goals for the environment.

For more insight on the U.S. construction industry and economy, attend the next free online event in the Construction Economic Webcast Series: CAUTION: Uncertainty and Disruptors Ahead, presented by ConstructConnect, AIA, and AGC, on Wed. Nov. 6, 2019 at 2 pm ET.

THOROLD, ONT. — The governments of Canada and Ontario have announced they are al...

This week’s top DCN headlines cover news that a member of the Carpenters’ Union...