On Heels of Y/Y Staffing Strength, a Canadian Hiring Hiatus in October

Hiring in Canada took a pause in October according to the latest Labour Force Survey report from the nation’s chief statistics-gathering agency. Statistics Canada says that total employment in the tenth month of the year stayed almost the same (-2,000 jobs) as in September. 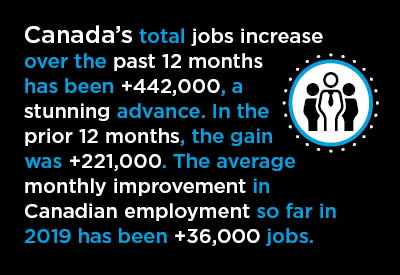 Both the seasonally adjusted (SA) unemployment rate (5.5%) and the participation rate (65.7%) remained unchanged. When Canada’s SA unemployment rate is adjusted to the same calculation methodology as is used in the U.S., it drops to 4.4% and appears more favorably when held up against America’s October SA jobless rate of 3.6%.

The not seasonally adjusted unemployment (NSA) rates in Canada and the U.S. in the latest month, with the Canadian figure calculated according to U.S. methodology, were a not-that- dissimilar and truly quite tight 4.1% and 3.3% respectively.

The average monthly improvement in Canadian employment so far in 2019 has been +36,000 jobs, more than three times last year’s January-to-October average monthly advance of +11,000.

Services Jobs have Grabbed all the Glory

Canadian workers in the manufacturing and construction sectors, though, had no reason to cheer concerning their ongoing employment prospects in October. The former shed 24,000 jobs and the latter cut its payroll count by 21,000.

Manufacturing’s average monthly jobs change to date in 2019 has been -2,000. Construction hasn’t done much better. Its monthly average change has been a barely positive +1,000.

Service sector jobs, however, have been an entirely different and cheerier story. Canadian services jobs in 2019 so far have recorded an average monthly pickup of +39,000, more than three times greater than 2018’s +12,000 for the same time frame.

The Canadian services sub-sector with the biggest bump in employment in the latest month was ‘finance, insurance, real estate, rental and leasing’, +18,000.

Canada’s exceptional jobs creation record this year explains why the Bank of Canada has been reluctant to lower its trend-setting ‘overnight rate’, keeping it at 1.75%, while the Federal Reserve has proceeded with three 25 basis-point cuts (where 100 basis points = 1.00%) that have reduced the federal funds rate from a top range of 2.25% to 2.50% to a present range of 1.50% to 1.75%.

In Provincial Labour Markets, Ontario and Quebec the Pacesetters

Some of Canada’s October regional labour market highlights were as follows:

Perhaps the October Canadian labour market statistics that stand out most are compensation results. Table 3 shows the y/y earnings of Canadian workers, hourly and weekly, and by union or non-union status.

There are certainly hints that the coronavirus outbreak could be the ‘Black Swan...

Inside Innovation: Construction’s need to prep for cyberattacks

Construction companies embracing the exciting forms of technology sweeping the b...

CHARLOTTETOWN, PEI — The federal government has announced spending of $30.7 mill...

MONTREAL — In what it says is a world first, Quebec-based Pomerleau has initiate...

New IBEW boss Barry will draw one line in the sand

The new leader of the International Brotherhood of Electrical Workers Constructi...

There are certainly hints that the coronavirus outbreak could be the ‘Black Swan...

Inside Innovation: Construction’s need to prep for cyberattacks

Construction companies embracing the exciting forms of technology sweeping the b...

CHARLOTTETOWN, PEI — The federal government has announced spending of $30.7 mill...

The premise of the YLG Talks sessions presented by the Hamilton-Halton Construct...

BIM’s next challenge: Moving beyond buildings

BIM is moving beyond buildings and into complex systems, but further integration...

Industry stakeholders are pleased with the Federal Court of Appeal’s decision to...