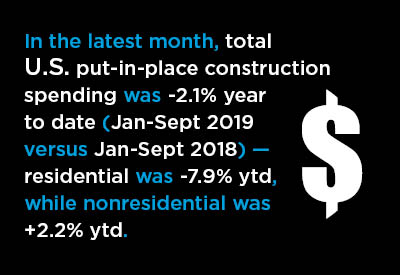 In concept, put-in-place construction figures are the summation of work-in-progress payments during any given month for all structures being built.

With respect to timing, they lag ‘starts’ statistics which are the summation of estimated final costs of all projects breaking ground in any given month.

A Flatlining in the Total Construction Curve

Graph 1 shows a flatlining in the level of total U.S. PIP construction dollars over the past two years, and maybe extending back three years. 2018 and 2019 have been only a little better than 2017.

September’s month-over-month (m/m) percent change in total PIP investment spending, at +0.5%, was both positive and a tiny bit above the +0.4% ten-year monthly average for the series.

Year-over-year (y/y), however, PIP’s ‘total’ performance was negative, at -2.0%, and well below the ten-year monthly y/y average of +3.9%. The y/y ‘total’ figure has been negative since the fall of 2018. This has been quite a departure from the solid improvement exhibited from 2012 through 2016.

From the top portion of Graph 2, residential PIP capital spending has been mainly receding since the beginning of 2018, although there has been a gentle uptick in the last couple of months.

Note, however, that the -3.5% y/y figure in September was much less severe than the -11.1% y/y result recorded in February of this year. The worst of the deterioration in residential PIP dollars, on a y/y basis, appears to be in the past. The dip in the y/y curve, which began in early 2017, is finally staging an encouraging reversal.

Furthermore, the shift towards lower interest rates once again should help the homebuilding sector with its turnaround.

One would like to place an upward sloping trend line through the most recent years of the nonresidential PIP construction spending curve, but it may not be warranted.

Y/y nonresidential PIP construction spending has been hovering close to its ten-year average (+2.1%), with minimal upwards or downwards amplitude, since the spring of 2016.

An increase of +2.1% is a ‘current’ dollar figure. It doesn’t take inflation into account. Earlier in the cycle, tariff introductions on lumber, steel and aluminum boosted material costs. Over time, that effect has largely dissipated. Now, it’s labor costs that are boosting the price of construction work. A growth rate of +2.1% drops below zero in ‘constant’ dollars.

By the way, attention should be paid to the long-term average y/y percentage increases for residential versus nonresidential PIP construction spending. The former (+7.8%) has whipped the latter (+2.1%).

Table 1 shines a spotlight on where, by type of structure, U.S. put-in-place construction spending has most recently been ‘speeding up’ or ‘slowing down’. A ‘speeding up’ or ‘slowing down’ determination is based on the percentage change performances of the PIP statistics in the latest three months over prior three months (annualized) compared with latest-12-months-over-prior-12-months.

A negative percent change that becomes less negative is judged to be an instance of ‘speeding up’. Appropriate check marks have been placed in the two final columns of Table 1.

Residential dollar spending, however, speeded up considerably, moving from -7.2% for latest-12-months to +4.3% (annualized) for latest-three-months.

Nonresidential was a different story, downshifting from +2.2% to -5.7%.

The sub-category that has fallen behind the most has been ‘commercial (retail, warehouse and restaurant construction)’, -13.1%.

Strong growth in office construction predicted for Canada in 2020

Structurlam expands operations with $120-million plant build in the U.S.

A major B.C. mass timber manufacturer is expanding south, setting up a $120 mill...

Virtual Reality (VR) has transformed the recreational gaming industry into a tot...

TORONTO — After 13 years as CEO of the Great Gulf Group, Jerry Patava will be re...

KETCHIKAN, ALASKA — The U.S. Army Corps of Engineers has issued a permit for a c...